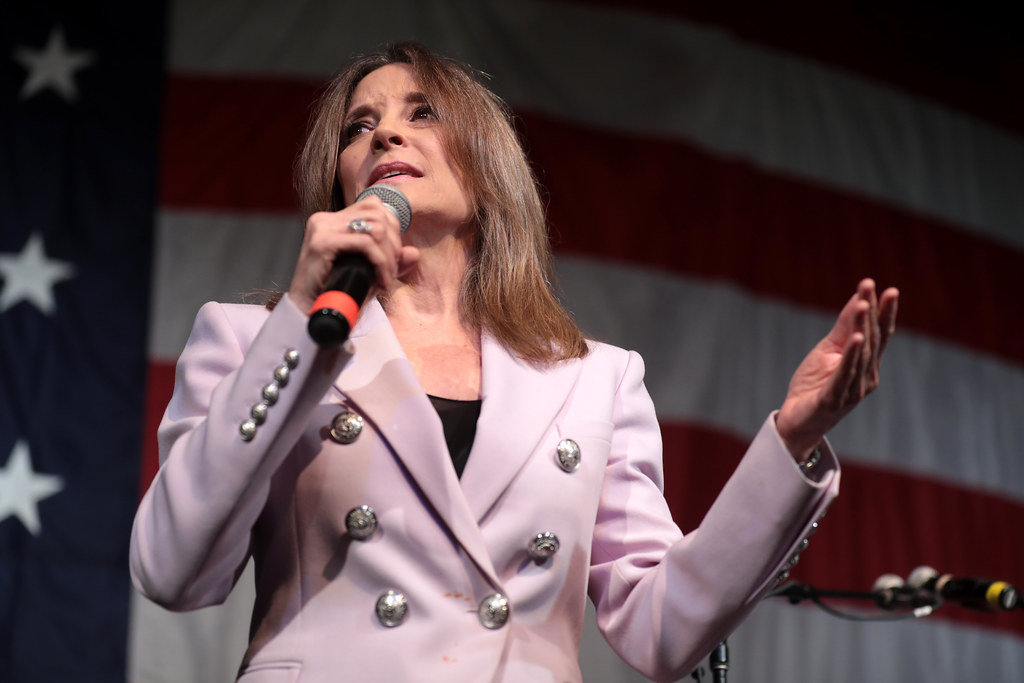 The other day, in the throes of my regularly scheduled 8:30 – 9:45 a.m. doomscroll, I stumbled upon a take that made me pause.

I like Bernie of course but Marianne was the only one who was truly able to accurately diagnosis the problem, which was that the vibe is all off. They never would have let her win that’s for sure

A casual observer (read: somebody who has a healthy relationship with politics and the internet) would have chuckled, given it a like and moved on with their day. After all, this is Marianne Williamson we’re talking about — didn’t she have a whole presidential campaign about orbs or something?

Thankfully, I spend far too much time on Twitter and happen to unironically love Marianne Williamson. While her New Age approach to politics is certainly unconventional, Williamson’s message is deeply inspiring.

Williamson’s status as a Twitter icon began in 2019, during the first Democratic presidential primary debate. That night, she was fairly gaffe-prone, at one point saying her first act as president would be to call the prime minister of New Zealand and tell her, “Girlfriend, you are so on.”

But she also had some incredibly insightful moments. One quote, in particular, stuck out to me: “I’ll tell you one thing … it’s really nice [that] we got all these plans, but if you think that we’re gonna beat Donald Trump by just having all these plans, you’ve got another thing coming. Because he didn’t win by saying he had a plan — he won by simply saying ‘Make America Great Again.’ We’ve gotta get deeper than just these superficial fixes, as important as they are.”

In Williamson’s view, the best way to beat Donald Trump is by “[harnessing] love for political purposes.” Her political philosophy is built around compassion, kindness and respect — in other words, good vibes. The allure and influence of her “politics of love” hasn’t gone unnoticed — an August column in Slate pointed out that “Marianne Williamson’s message is what the Democrats are carrying into November.”

It is important to note that Williamson’s approach is markedly different from the unity-oriented politics of, say, Pete Buttigieg. When it comes to policy, Buttigieg is a run-of-the-mill centrist Democrat largely focused on reconciliation with the other side; rather than preach a vision, he preaches compromise. Williamson, on the other hand, believes in bold, progressive solutions for our country that are guided by a sincere love for all people.

In a video on her YouTube channel, Williamson summarizes the exact reason why she’s so appealing: “I’ve thought a lot about how it is that so many of us became chronically disengaged from the issues of politics, and part of it is not just that it’s so toxic but also that our politics seem so far removed from our human realities.”

And the thing is — she’s totally right! Far too many people think that politics is such a big, complex realm that they don’t bother engaging with it. Politicians have to preach a message of hope that connects with people on a visceral, spiritual level, and that is exactly what Williamson has perfected.

The vibes in this country are, indeed, “all off,” and dammit, nobody else is talking about it! Williamson seems to be the only major political figure who understands that America needs to collectively take, like, five minutes to relax. Sure, she comes across a bit kitschy and silly and sort of like somebody’s aunt that moved to Colorado in their late fifties, but she’s comforting. Isn’t that what we’re all looking for right now?