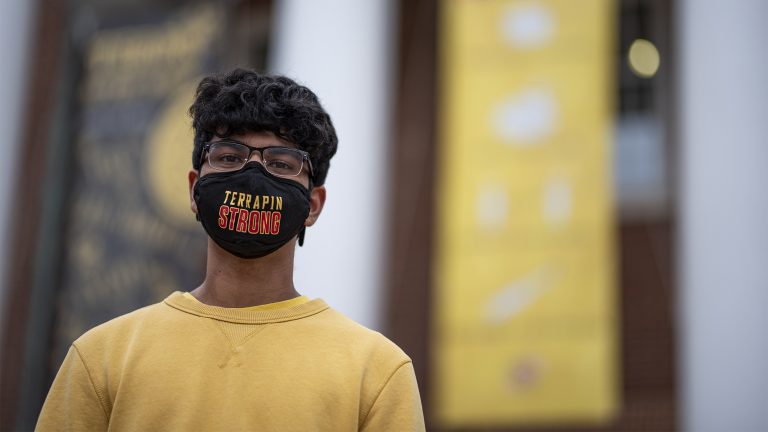 Adithya Arun, a sophomore aerospace engineering and computer science major, poses for a portrait in front of the Stamp Student Union on Sep. 29, 2020. Arun is a "4 Maryland" ambassador. (Eric Harkleroad/The Diamondback)

By Hope Kahn
For The Diamondback

At the beginning of August, Adithya Arun was getting ready to head back to the University of Maryland as a resident assistant. Then, he found out his position had been cut.

The university was attempting to de-densify dorms due to the ongoing coronavirus pandemic, so the number of RA positions had been reduced, he said.

“I’m only a sophomore, I was going to be a new RA, so obviously I’d be the first to go, right?” said Arun, a sophomore aerospace engineering and computer science major.

But a new opportunity presented itself.

Arun was offered a position as a “4 Maryland” student ambassador, designed to help promote the university’s information campaign encouraging students to abide by health and safety guidelines amid the pandemic.

About 65 students at the university now work as these ambassadors, according to information provided by a university spokesperson. Ambassadors are expected to provide peer-to-peer mentorship and model safe behaviors for other students.

As an ambassador, Arun said, he’s been working four or five shifts a week — each lasting one-and-a-half to two hours — at the Maryland Stadium COVID-19 testing site, where thousands of tests are administered every week. Sometimes he’s checking people into the testing center, giving people directions or retrieving water and testing kits for staff, he said.

Because Arun’s RA position was cut, he said, he is receiving the same compensation that he would have if he were an RA: free room and board.

Emma Rowlands, a junior at this university who was not originally hired as an RA, said she is paid $12 per hour to be an ambassador. Rowlands has been stationed at the Clarice Smith Performing Arts Center as a part of her ambassador responsibilities.

Her ambassador training included a Zoom session, some PowerPoints and a de-escalation instruction that addressed how to handle a situation where people refuse to follow health protocols, Rowlands said.

Although the community health major was happy just to return to College Park, she also wanted to get involved and help in any way she could.

“Being on a college campus is extremely difficult with just the sheer amount of people,” Rowlands said. “But I think it’s very clear with the ‘4 Maryland’ initiative and all that, they’ve been taking it seriously and doing a good job.”

Nhu Le, a sophomore microbiology major, also serves as an ambassador. She thinks the university has done a good job of keeping students safe.

But the university isn’t the only player involved in preventing an outbreak.

Though Le said she thinks students have done a good job at wearing masks, she still sees some neglecting physical distancing guidelines.

As an ambassador, Le said, she likes to explain the science behind all the safety precautions, hoping to encourage students to adhere to precautions by helping them understand.
“Anything is very hard to follow without knowing the science or the reason behind it,” Le said.

But the position isn’t just about education. Ambassadors are supposed to provide a welcome face whenever students go to COVID-19 testing sites or attend other campus events.

“We are there to remind people that, you know, the pandemic is still a thing regardless of what we do,” Le said. “We’re gonna get through this together.”