Review: ‘Emily in Paris’ is an above-average romantic drama 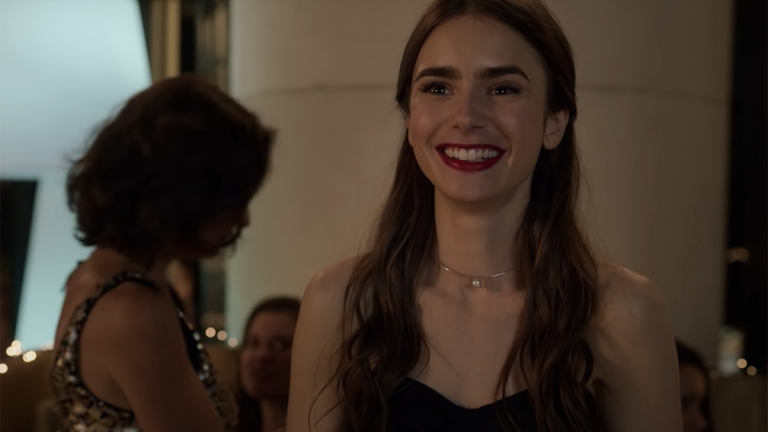 'Emily in Paris' is now streaming on Netflix. (Photo via YouTube)

I’m a sucker for soapy, romantic comedies. No matter how fluffy or trivial the stories may be, I cherish the comfort from each sappy moment. If there’s comfort food, then there’s also comfort television, and that’s what Emily in Paris is.

In the new Netflix series, Midwesterner Emily Cooper (Lily Collins) earns a promotion in Paris after her boss had to back out at the last minute. The social media strategist is immediately swept up by the charm and culture shock of her big move to France.

The series gave me a mix of The Devil Wears Prada and Gossip Girl. Much like how Anne Hathaway’s character in The Devil Wears Prada joined Runway magazine, Emily comes to the Savoir marketing firm as a clear outsider. She can’t speak French, and her experience in marketing for pharmaceutical companies differs from the French firm’s usual clientele in perfume, fashion design and other luxury brands. And Emily’s cold new boss, Sylvie (Philippine Leroy-Beaulieu), makes it clear how much the peppy American sticks out. Sure, she doesn’t reach Meryl Streep-levels of intimidation, but the parallels are undeniable.

Emily in Paris possesses the same frivolous-yet-dramatic nature of Gossip Girl that I find so endearing. In the garbage fire that is 2020, these soapy dramas and their semi-predictable outcomes are a nice escape. Despite the cold welcome at Savoir, Emily is usually able to finagle her way out of the unique challenges her job throws at her.

Maybe Emily’s ability to overcome these challenges was a little far-fetched. But this is what I want in a romantic comedy. She falls into a new love affair at practically every turn — it’s almost enchanting. Emily is either being charmed by the chef who lives below her or meeting a potential new fling at the marketing firm. It isn’t how most authentic love stories work, but the sheer convenience of these encounters provides the right level of escapism necessary for a great rom-com. Not only do they cater to Emily’s romantic life, but they also prove to be advantageous when she’s in a tough spot at work.

It doesn’t hurt that Emily gets into an entanglement or two with her clients. If it weren’t for the gaggle of conventionally attractive brunette men at her disposal, maybe she wouldn’t have lasted at Savoir. The series really plays up the fact that she’s working in the city of love. The overlap between business and pleasure became customary by the third episode.

Perhaps one element of this series that felt too good to be true was Emily’s meteoric rise to travel blogger Instagram fame. As the series developed, a graphic of her latest Instagram posts periodically shows up on the screen. When she posts a selfie in the first episode, Emily had a measly 200 followers. Three episodes later and she’s up to 10,400.

I won’t knock the photos — her feed has a nice aesthetic. She’s also a marketing whiz, so her captions are often clever and appealing. I’m just in utter disbelief at the Instagram algorithm helping someone out this much. While her burgeoning online platform gets her in some trouble with Sylvie along the way, Emily’s clout ultimately helps her gain credibility with clients.

Her Instagram is already a plot device. The series could’ve gone further by throwing in a mishap where she posts a risque photo by accident, or even worse, her account gets shadowbanned.

While most of Emily in Paris feels dreamier than reality, the show doesn’t brush past Emily’s rough adjustment to the culture. Whether it’s from her downstairs neighbor teasing her for getting the floor numbers wrong or her coworkers critiquing her pronunciation of certain French words, she is humbled constantly. I’d expect a romantic series like this to even romanticize the language barrier — I’m glad they opted for a bumpy transition instead.

When comparing American and French culture, Emily’s coworker Luc says, “You live to work. We work to live.”

This conversation adds more depth than I expected from the series. There’s a steady contrast between Emily’s animated, persistent attitude and the rest of the firm’s distant, cool demeanor. Collins gives a convincing performance as a work-driven girl from the Midwest. She comes off as individualistic and clueless at times.

There’s one soap opera convention I’m glad Emily in Paris didn’t abandon, though: The finale left multiple storylines up in the air. It wasn’t exactly a severe cliffhanger, but it was enough to keep me invested in another season. While an American passport can only get you so far these days, this series gave me an escape in the form of Emily’s adventures in Paris and her dizzying love life.