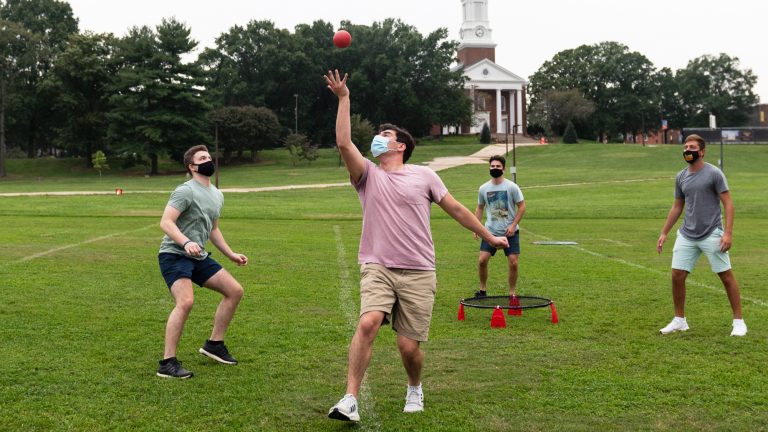 Students play spikeball. Intramural sports such as pickleball, cornhole and disc golf have risen in popularity amid the coronavirus pandemic. (Alex Chen/The Diamondback)

As on-campus instruction starts up at the University of Maryland, so do extracurriculars. Intramural sports are set to return — albeit in a modified fashion due to the COVID-19 pandemic.

The intramural staff is offering sports students can play while social distancing. As a result, mainstays such as soccer, basketball and flag football have been left behind, while volleyball, softball and kickball are becoming the centerpiece of this year’s fall intramural sports experience.

Cornhole, disc golf and pickleball are also being added to the intramural sports slate, offering a slightly different sporting experience.

Disc golf stood out to junior computer engineering major Daniel Niezelski. As the captain of the club ultimate frisbee team, he started playing disc golf over the summer to fill an ultimate frisbee-sized void. Now, he gets to put his skills to the test.

“We were really excited to try it once intramurals started,” Niezelski said.

With more popular sports being put on hold, this season offers a good opportunity for students to become interested in a sport they normally wouldn’t participate in.

“A lot of people have never played disc golf or even heard of it,” Niezelski said. “I think if enough people try it, hopefully they’ll find it fun enough, and maybe it can become a thing post-COVID as well.”

“There’s not much going on at campus,” Segal said. “I’m involved in other clubs that are virtual, so it’s nice to get out and get involved with something else different, especially for my senior year.”

Each sport features a litany of restrictions to ensure the safety of the participants, said Jason Hess, the intramural sports assistant director. Kickball is being offered in a weekend tournament format. Softball players are required to wear masks at all times, while tag outs are prohibited — fielders have to throw the ball back to the pitcher to record an out.

However, the intramural experience isn’t limited to the field, with virtual competition also being offered, as was the case in the spring.

“Playing Rocket League online with other Maryland students is a good way to stay in the intramural spirit,” said Kurt Willson, a senior environmental science and technology major.

Madden, Fortnite and FIFA are among the options, with this university also providing trivia at events such as Terps After Dark.

Willson said playing video games such as Rocket League with his friends has been fun, but it doesn’t feel the same as a physical sport.

“I don’t think it will ever replace being able to go out and compete against actual people,” Willson said. “Obviously esports has the same competitive edge, but for the most part you’re still sitting down. I really don’t see it as the same.”

Still, in a pandemic-ravaged world, students at this university have options. Whether from behind a screen or at a distance, the chance to compete remains.