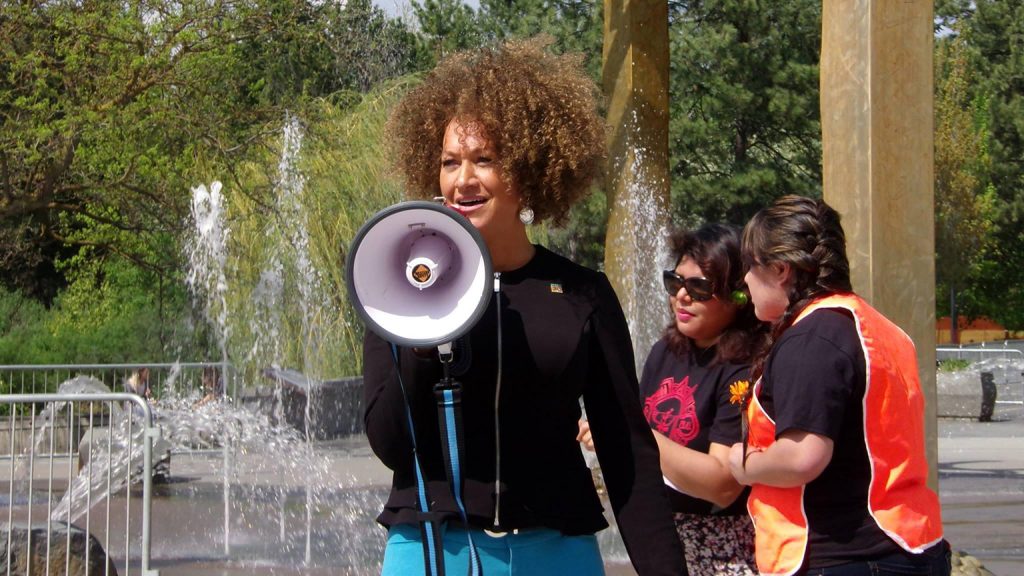 Rachel Dolezal is an example of white women constructing Blackness to benefit themselves. (Photo courtesy of Aaron Robert Kathman via Wikimedia Commons)

On Sept. 9, Jessica Krug resigned from her position as a history professor at George Washington University after a Medium article titled “The Truth, and the Anti-Black Violence of My Lies,” was posted under her name. In the article, Krug confessed to lying about being a Black woman, stating, “I have eschewed my lived experience as a white Jewish child in suburban Kansas City under various assumed identities within a Blackness that I had no right to claim: first North African Blackness, then US rooted Blackness, then Caribbean rooted Bronx Blackness.”

Essentially, Krug — literally a white woman from Kansas — only had to mimic Black mannerisms, self-tan and start going by “Jess La Bombalera” to gain tenure at an esteemed, expensive private university.

The lengths Krug went to so she could construct and maintain her false persona as a Black woman are as perplexing as they are extreme. She published a book on fugitives of colonialism, spoke about her rough adolescence in New York City at Afropunk, had her work recognized as a finalist for the Frederick Douglass Book Prize and mentored countless Black and brown students, some of whom seemed shocked by her admission.

In interviews with The Cut, one of Krug’s former students revealed that “when she introduced herself, she was very adamant that she was from the Bronx — she had a very heavy accent throughout the whole class.” Another student said, “The things that she taught me could have been done without this whole minstrel show of a persona.”

But this is not an isolated incident. Most notably, former NAACP leader Rachel Dolezal and, more recently, Indiana-based racial justice activist Satchuel Cole both undertook the same sad, confusing lie to gain access to and influence in progressive Black spaces.

Our society has a predisposed preference for lighter skin, creating the circumstances that allowed for Krug’s, Dolezal’s and Cole’s successes. Masquerading as Black people, they were able to gain leadership roles, receive grants and professionally trend upward rather swimmingly, while darker-skinned Black women still struggle for the same opportunities and recognition.

In her column for the New Yorker, Lauren Michele Jackson references this “story” that allowed Krug to blend in, writing, “the lightest among us have a way of perpetuating their lightness over generations, prizing it as it is prized by the institutions they move within.”

Krug used this to her own advantage, at one point using a fabricated backstory about being conceived via rape to defend herself from doubts regarding her true ethnicity. Despite countless holes and inconsistencies in her story, she was willingly given the benefit of a leeway many others would be lucky to receive. The worst part about it is that she probably would have continued to reap the benefits of performing Blackness if exposure wasn’t imminent.

This goes beyond these women and their ability to simply perform Blackness. They construct it in their own vision. Their actions show that they see Blackness and all that comes with it as one-dimensional and rudimentary, rather than a multifaceted identity. For them, it’s merely a tool, something that can be completely fabricated on a whim and used at the convenience of white people to assuage white guilt, to receive attention, to shift blame.

This isn’t new — white people have historically fabricated Blackness to create advantages for themselves. In 1994, Susan Smith accused a Black man of carjacking her and driving away with her two small sons, sparking a statewide manhunt. In reality, she had pushed the car into a lake all on her own. In 1989, Charles Stuart claimed that a Black man had shot him and his pregnant wife, resulting in police raids and the rampant, targeted searching of innocent Black men. In 2010, Bethany Storro reported that a Black woman had approached her and thrown acid in her face, scarring her badly. It was not until she became a national news story and was booked on daytime television that she admitted she was lying.

I’m not sure how to stop future Jessica Krugs or Rachel Dolezals. This pattern of white women constructing Black identities for themselves to get what they want isn’t just indicative of a desire for power — it displays a blatant disregard of the reality of the Black experience. They pretended to be Black for a reason: themselves.