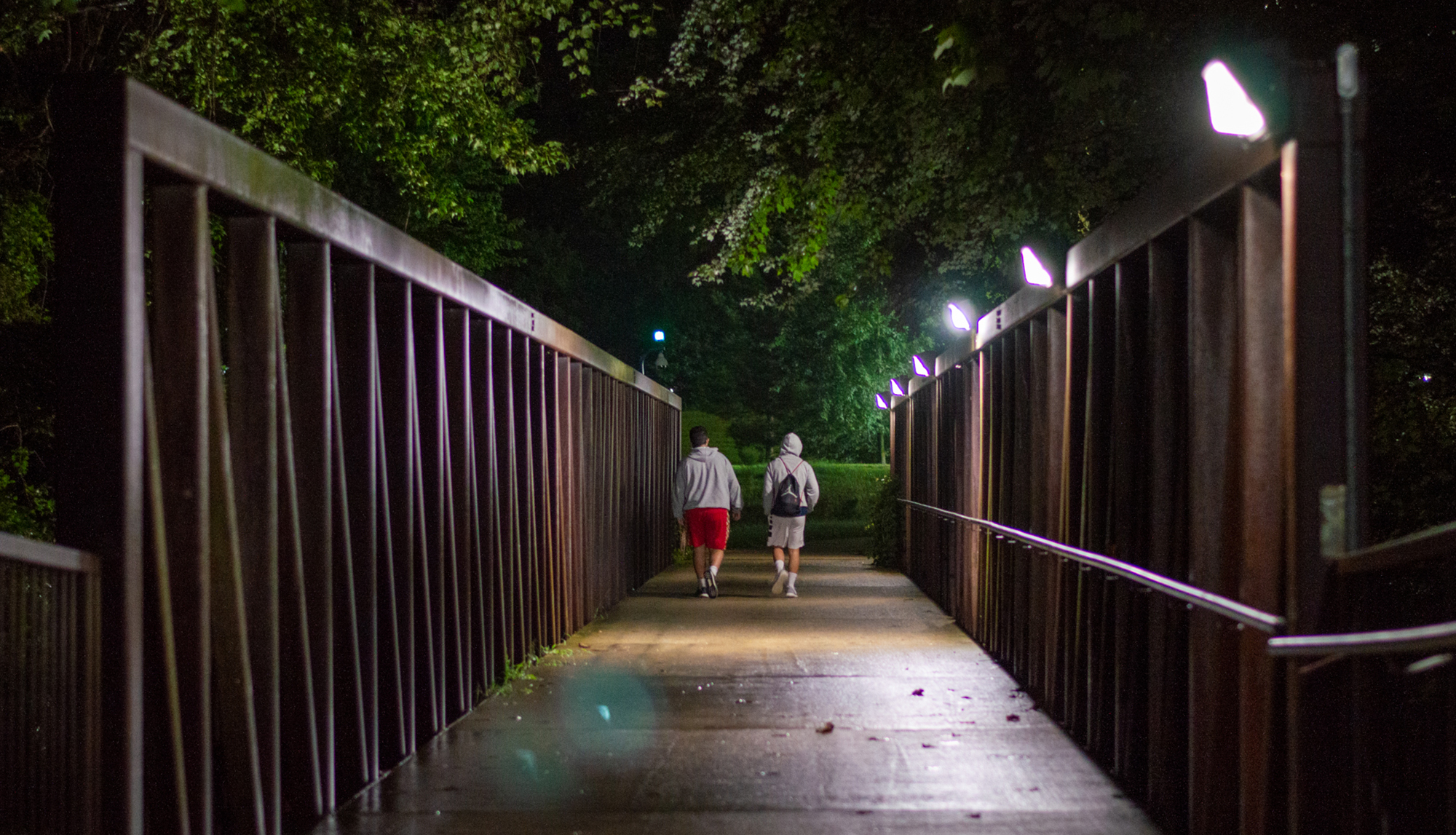 A few days before classes started, Jose Hannan and his roommates decided to go for a late-night walk to their favorite spot on Terrapin Trail. When they arrived at the trail, they hung out briefly before heading back.

As they passed the Terrapin Trail Garage, Hannan, a senior math and physics major at the University of Maryland, heard a motorcycle rev. Soon after, a police officer came out of the garage and stopped the group.

The officer asked them to stop and sit on the ground. Soon, other officers joined to talk to Hannan and his roommates, he said. “They … showed up in a flock,” Hannan said, but they were not aggressive.

“We were just like, holy crap, what is going on?” Hannan said.

The next day, after waking up a little unsettled from the interaction, he sat down to compose a Reddit post to share his experience and warn fellow students. University police said his post lacked some important context, including information about police routes and protocols.

Hannan speculated that university police had staked out the area because many students would use the spot to smoke marijuana, but police spokesperson Sgt. Rosanne Hoaas said the group of officers was conducting squad-level training in the garage and had already seen another group passing through the area. Plus, from police training and on-campus experience, officers have determined being in the woods late at night is suspicious behavior, Hoaas said.

However, Hannan knew they had done nothing wrong and the police wouldn’t find anything from a search, so he wanted to get the interaction over with, he said.

“At that point, it was just like, ‘Let’s just do it and then we go home,’” Hannan said.

Hannan consented to a search, Hoaas said. After that, the officers separated them and asked Hannan to interlock his hands behind his head and squat. The officer then came behind Hannan and felt around his crotch.

Although the officers did not explain what this procedure was for, Hannan suspected they were checking to see if concealed drugs had fallen from his waistband, which Hoaas confirmed.

A squat test is used informally by officers to reveal drugs hidden in waistbands — if the person receiving the test squats, the drugs will fall out from the waistband and officers will be able to feel them in their clothes, Hoaas explained.

Hannan and his roommates were confused as to why Hannan, who is half-white and half-Puerto Rican, was the only one asked to squat by the officers, he said. While his two roommates, who are white, were upset that Hannan was selected because they believed he was racially profiled, Hannan didn’t know what to think.

“I mean I guess I can’t rule it out,” Hannan said. “It just seems weird to me why they would pick the only Hispanic person in the group to do a squat.”

[“We have heard our community”: UMPD discusses decision to divest from 1033 program]

Hoaas explained that incidents are handled fluidly in the field and there was no obvious cause from body camera footage as to why the officer decided to perform a squat test, besides that Hannan had given consent to be searched.

After the squat test, the officers checked the students’ pocket and their identification, chatted with them a bit and sent them on their way, Hannan wrote in his Reddit post.

Although the interaction was cordial and the officers seemed relaxed, Hannan and his roommates were still left a bit shaken from the encounter, he said. While many Reddit users encouraged the group to report the interaction, Hannan’s roommate was worried about doing that, in light of recent police retaliation cases, Hannan said. And though Hannan called his roommate’s fears “ridiculous,” he has not reported the incident.

Hannan said they weren’t very concerned about the situation because campus police are “less dangerous” — and all three of them are white or white-passing. It weighed on them how the interaction may have been less cordial if they weren’t, he said.

“That’s hypothetical, of course,” Hannan said. “But with all the stories we’ve heard, it’s just definitely something we thought about.”

His Reddit post gained traction on the r/UMD subreddit, with many users weighing in and some pointing out the police had no probable cause to stop Hannan and his roommates.

“A Maryland court just ruled the smell of marijuana isn’t enough for a cop to conduct a search and arrest … so I guess that means everyone gets searched now,” one Reddit user commented, referring to a court ruling from late July.

Hannan said, looking back, the situation did “aggravate [him] a little bit.” But he liked that people used the post to provide education and resources about citizens’ rights.

“There were just people commenting all day. And every time someone sent something like that, I actually learned something,” Hannan said. “I really appreciated it. I wasn’t really expecting to get that whole realization on Reddit.”