Review: SZA did not come to play with latest single ‘Hit Different’ 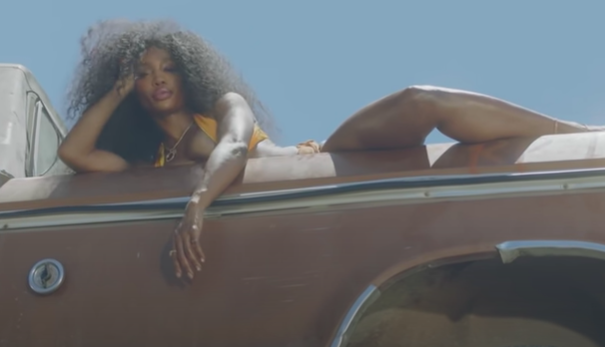 When I first listened to SZA’s “Drew Barrymore,” the lead single off of her debut studio album Ctrl, I was enjoying my lone and uneventful summer before the start of my first year at college. My days were quite simple, and the added bit of solitude meant I had more time to aimlessly roam the World Wide Web, whether that was reading up on the latest celebrity gossip on Reddit or scouring through YouTube for random videos to keep myself somewhat engaged.

And on a hot summer’s day, while I lay in bed and aimlessly watched a random collection of YouTube videos, SZA’s “Drew Barrymore” music video popped up on the right side of my screen with a small “Recommended For You” note at the bottom. Minutes after listening to the woeful tune, I was hooked on a genre of music I had never been exposed to — or very much into — throughout high school.

Sonically, the song is a hypnotizing R&B ballad, and SZA’s smooth, silky and poignant vocals made it all that more alluring. But it was also the small details in the video, from the way she unapologetically rocked her voluminous hair, sported an eclectic ensemble of outfits and even included a brief — but monumental — cameo of the one and only Drew Barrymore, that made me realize how transfixed I was by this artist.

I’m now in my senior year of college, and during my last first week of school, SZA conveniently dropped her unexpected — but much needed — single “Hit Different,” featuring Ty Dolla $ign. Nestled in my College Park apartment during a stormy Thursday night, I and some friends stayed up until midnight, eagerly waiting to listen to the new release before heading to bed. I ended up going to bed satisfied and once again, completely in awe and mesmerized by the artistry that SZA possesses.

Only SZA can make a song about heartbreak and a troubled relationship sound both calming and sensual at the same time — a musical characterization that’s exactly the opposite of a typical wailing tune. “Hit Different” is a serene ballad that is actually conflicting and troublesome in its true essence. The song explores the trials and tribulations of a no-strings-attached relationship and how it can all go awry and leave one feeling a bit lonesome in the end.

SZA’s verse in the song strays away from any artistic experimentation and instead stays true to her signature creative prowess and vocals, which are artfully loud and yet gentle at the same time. She does add a refreshing staccato-falsetto combo at the end of her second verse, when she enunciates the double “o” in the words “cool” and “boo’d.”

“You a wild one, and I’m wading in you like it’s cool water/ Like it’s cool when you pull up boo’d up with a new and it’s not me,” is the line that effectively sums up the song’s entire vibe and theme.

[Review: ‘Midnight Sun’ can bite me]

In the opening scene, SZA and her backup dancers all flaunt an orange get-up and look flawless while body rolling and dancing synchronously in the middle of a junkyard — a backdrop that seems more cinematic than battered. SZA then sports another baggy fit while on top of a haystack and then returns to the junkyard, now in an all-denim and crop-top fit.

In the most striking scene of all, she lies in a barn amid white animals, completely nude and covered from head to toe in blood — a scene that looks straight out of Carrie’s cinematic prom disaster or Lilith’s blood-soaked moment from True Blood.

It’s these visual jumbles within the video that prove SZA’s power to surprise, shock and deliver the unexpected — much like her “Broken Clocks” music video, which was proven at the end to be one big concussion daze she suffered after a strip club brawl.

It’s still not determined if “Hit Different” is a stand-alone single or part of an upcoming album, but if this is the first taste of SZA’s new music for the year, then I’m expecting a lot of great things from her in the near future.