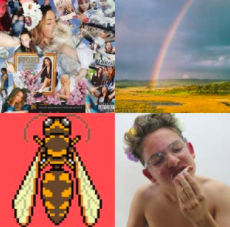 Our 'end of the world playlist' includes the likes of Cherry Glazerr, Mallrat and Seizure Machine. (Screenshot via Spotify)

We’re more than halfway through 2020 and this year has already been swarmed with a series of events more unfortunate than usual. The possibility of a third world war rocked the nation and launched a storm of memes on social media. Bushfires engulfed Australia and “murder hornets” somehow became a thing. The veil of systemic racism is slowly, yet painfully, being lifted in the wake of the death of George Floyd and the many weeks of protests following. And amid a global pandemic — which continues to ravage humanity — the bubonic plague has resurfaced in Colorado and Mongolia.

It’s like each month has introduced a new and unthinkable atrocity. Perhaps the idea of the world coming to a sudden end no longer seems so far-fetched.

Here are a few songs from my personally curated “End of the World” playlist to help channel 2020’s chaotic spirit and speak its eventual end into existence:

“Whites Not My Color This Evening” by Cherry Glazerr

It’s the clashing guitars and drums paired with Clementine Creevy’s brash vocals that make this tune apt for an impending doomsday. The entire premise of this song is about agony — clearly a different kind of agony, but still agony regardless. It’s a bop that’ll help channel all the pent-up anger and frustration we collectively have for this year. Just make sure to don all black while listening.

Remember when the Pentagon released videos of “unidentified aerial phenomena” back in April? This song is for the aliens that may be lurking in a world close, yet unknown to our own. Extraterrestrial life remains a mystery, but who knows? Maybe a flock of aliens will show up later this year as a little treat. Maybe then, Roland Emmerich’s Independence Day will be more nonfiction than fiction, which is really frightening to think about.

And remember when hundreds of TikTok teens and K-pop stans duped Trump and his campaign team during his Tulsa rally? Many of these Gen Zers are probably too young to remember this legendary 2008 bop, but this P!nk song about utter defiance and rebelliousness goes out to them. “I wanna start a fight” and “So what?” are basically Generation Z’s mottos this year.

This techno-funky tune is quite bizarre because it repeatedly likens the murder hornet’s sting to the coronavirus vaccine. I’m not really sure what Seizure Machine is trying to imply — or foreshadow — with their lyrics, but this tune is fun to dance along to and laugh over. Feel free to check out the official music video, too.

“I Can’t Handle Change” by Roar

The onset of the pandemic has proven that people in the states can’t be inconvenienced in the slightest for the greater benefit of others and, I guess, themselves. This song’s pre-chorus — and pre-chorus only — specifically goes out to those who continue to disregard quarantine protocols, mask mandates and social-distancing regulations. Perhaps adding a few lifestyle changes is just too much to ask. And with the way things are going, consider the possibility of a “normal life” a distant reality.

Honestly, this year deserves a few punches in the air, a big middle finger and some verbal expletives. Avenue Beat’s latest release vocalizes that sentiment with lyrics about the early promise of 2020 and its ultimate demise. It’s a year of loss, loneliness, failure and just all things bad for many. So, just like Avenue Beat said, “low-key fuck 2020,” because we’re so done with its B.S.

Listen to the full playlist here.