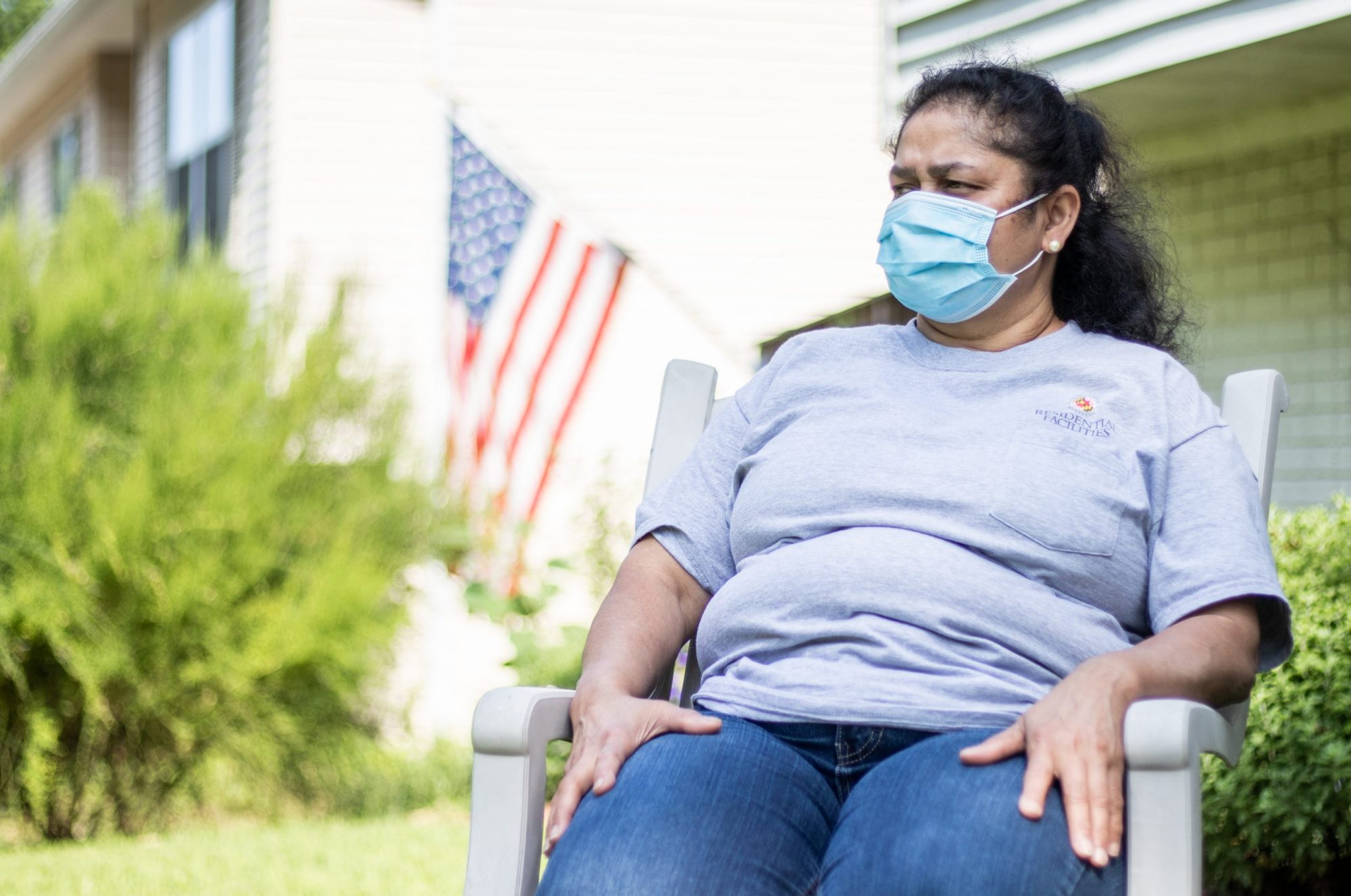 Rhonda Leneski, a University of Maryland housekeeper, is using her own leave to stay home, rather than work in a building without air conditioning. (Julia Nikhinson/The Diamondback)

After several University of Maryland housekeepers fell ill from working in dorms without air conditioning, officials announced three measures on Friday to accommodate employees continuing to work in buildings with deactivated HVAC systems.

The university shut off the HVAC systems in 19 dorms on June 26 to conduct “critical maintenance” in an effort to control moisture and improve ventilation in the buildings before students return to campus in the fall, according to a statement emailed by university spokesperson Natifia Mullings. The systems are planned to remain shut off through Aug. 9, she added.

However, she wrote, the university is now offering housekeepers “alternative working hours” to limit exposure to the hottest parts of the day and temporarily reassign them to other duties in the event of “certain conditions of heat and humidity.” The university is also considering other options — hiring contract workers, for example — to expedite the maintenance work happening in those buildings, Mullings wrote.

In some cases, it is necessary to shut off the HVAC systems to replace equipment or piping, university spokesperson Katie Lawson wrote in an email. Other maintenance being conducted includes ensuring dehumidifiers are functioning, checking fan coil units and cleaning and changing filters, she wrote.

While the union that represents workers on campus sees the university’s response as a “small amount of progress,” Todd Holden, interim president of the local union chapter, stressed that it is far from sufficient. And after days of back-and-forth with the university, Holden said the union and the workers have grown extremely frustrated.

“Even as this rolls along, the workers are still having to report and they’re still having to deal with the circumstances. The university, at any moment, has the power and the ability to make sure that they’re not placed in that environment again,” he said. “We would just expect that they do better.”

The measures the university announced Friday come in addition to others that are already in place, Mullings wrote, including the installation of large fans and providing housekeepers with cold water stations and air-conditioned break spaces. The university has also increased the number of breaks for those working without air conditioning, encouraged them to work at a slower pace and established cleaning rotations to minimize work in “affected buildings,” Mullings wrote.

In the meantime, the union — the American Federation of State, County and Municipal Employees Council 3 Local 1072 — says housekeepers are continuing to get sick from working without air conditioning as temperatures in College Park hit the 90s. For some, working in these conditions has aggravated their asthma — especially because employees are now required to wear masks on campus. Others say they’ve come down with headaches and nausea at work.

In an interview with The Diamondback, Student Affairs Vice President Patty Perillo emphasized that the additional measures announced by the university on Friday did not come in response to anything — they are being implemented because she and her colleagues care deeply for the university’s employees, she said. She is a first-generation college student and comes from a working class family, she said, calling the housekeepers and university staff her people.

Perillo added that university President Darryll Pines walked through Bel Air Hall — one of the buildings with a deactivated HVAC system — on Friday. Perillo will also be working a shift with housekeepers in a building without air conditioning on Monday, Lawson said.

But Holden also pointed to a university policy on building temperatures, which states that it is the university’s goal to maintain the temperature of “occupied buildings” between the range of 68 and 78 degrees Fahrenheit all year round. According to AFSCME’s reading, Holden said, the university is in violation of the policy: Housekeepers have recently measured temperatures as high as 99 degrees in buildings with nonfunctioning HVAC systems.

99 degrees, after UMD turned off the AC in the dorms. This isn't ok, and this shouldn't be the price workers pay for taking care of the university. pic.twitter.com/vI2p8tbf3G

Keith Wrightson, a health and safety specialist for AFSCME, also expressed concern about the dangers housekeepers are facing in working without air conditioning. According to the Centers for Disease Control and Prevention, an average of about 658 people succumb to extreme heat each year, even though all heat-related deaths and illnesses are preventable.

“I would hope that the health and safety of the workers there on the university campus would be more of a concern,” he said. “We’ve lost people at AFSCME across the country because of heat stroke and heat illnesses, and it’s a big concern for our organization.”

Furthermore, Holden raised frustration with the fact the university is not offering administrative leave to workers who fall ill from working without air conditioning. According to the statement Mullings emailed, “high-risk” employees who are scheduled to work on campus and choose not to must use accrued annual or personal leave to continue to be paid.

She also wrote that workers who have underlying medical conditions that put them at high risk for COVID-19 — including those who have moderate to severe asthma or a compromised immune system — are permitted to use sick leave. Among other criteria, workers may also use sick leave to care for an illness, according to University Human Resources policies.

But Holden said workers shouldn’t have to use their own leave in this situation at all.

“Employees do not have a choice about whether or not they’re assigned into these conditions that are intolerable. Why should they be forced to use their own leave to stay out of those conditions?” he asked. “It seems like a very false choice to us.”

And, he pointed out, employees may be less likely to use their own leave to stay home from work due to the ongoing coronavirus pandemic. Leave these days is precious to workers, since people have either had to use it to get through all the turmoil brought on by the outbreak or are trying to preserve it to prepare for what the future may bring, Holden said.

Mullings also stated in her email that employees who need to be absent due to COVID-19 and are unable to work may be eligible for emergency paid sick leave or expanded family and medical leave.

One housekeeper, Rhonda Leneski, described how sick she felt last week after working in Ellicott Hall — one of the eight dorms on campus that doesn’t have air conditioning. She had a headache that wouldn’t go away all weekend, so she stayed home from work on Monday and Tuesday.

On Wednesday, though, she returned to work because she was afraid she’d get into trouble for using her sick leave without providing a doctor’s note. That day, she continued working in Ellicott Hall, breathing in the hot air through a mask — something that her asthma makes all the more “punishing.” The next day, however, her supervisor told her she could go home if she was feeling ill. She would just have to use her own leave.

“I was speechless,” she said.

Previously, on a cooler week in June, Leneski said she and her coworkers had asked their supervisor if they could start cleaning the buildings without air conditioning before temperatures rose. But they were refused, she said. Now, she is using her own leave to stay home from work, rather than save it to spend time with her three children or care for them if they become ill, as she was planning to.