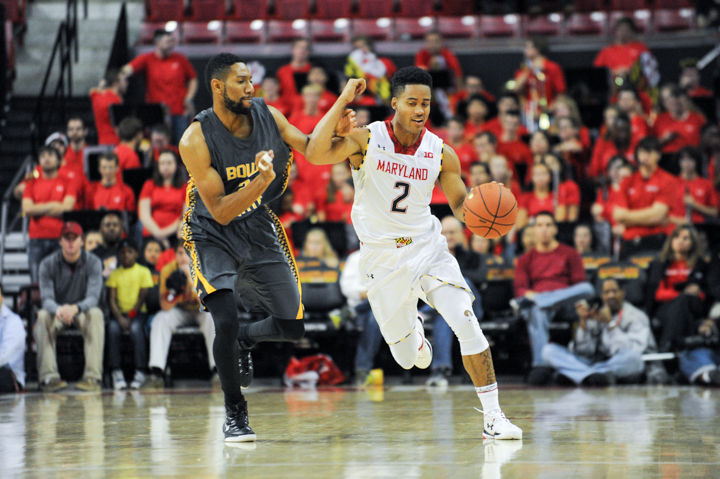 Guard Melo Trimble shrugs off a defender as he sprints down the court during the second half when the Terps defeated Bowie State, 89-47, at Xfinity Center on Nov. 8 2014.

Former Maryland star Melo Trimble is on the move once again, agreeing to a one-year contract with Montakit Fuenlabrada of Liga ACB in Spain.

Former Terps star Melo Trimble has signed a new overseas deal, this time with a club in Spain.

The deal is a 1-year deal that will pay him $250,000 and has an opt-out should an NBA team want to sign him: https://t.co/N25NOfifXt #Terps pic.twitter.com/LnzXRABavd

Trimble, who became a standout guard during his three seasons with the Terps, has starred all around the world since he went undrafted in the 2017 NBA Draft.

This past season, Trimble averaged 19.9 points, 4.5 assists and 3.3 rebounds per game for fourth-place Melbourne United of the Australian NBL and had even received some interest from NBA teams before the COVID-19 pandemic.

Nevertheless, Trimble’s great season flew under the radar as he wasn’t named to either All-NBL team despite finishing in the top-seven in scoring and assists.

During the 2018-19 season, Trimble was the second-leading scorer in the NBL for the Cairns Taipans with 22.5 points per game. He then immediately moved to Puerto Rico and averaged 17.4 points and 6.3 assists per game for the Piratas de Quebradillas of the Baloncesto Superior Nacional league.

The move to Spain will likely be his greatest challenge of his professional career as his new team finished 5-17 this season, which was good for 17th-place in the 18-team league.

The league also features loads of ex-NBA players and is a far more talented league than the NBL or the Baloncesto Superior Nacional league. However, Trimble’s team does have some ex-NBA players including Anthony Brown, Deandre Liggins and Christian Eyenga

Trimble’s contract allows him to leave the team if an NBA offer presents itself and, with the way that Trimble has played in recent years combined with the potential for expanded NBA rosters due to the pandemic, it’s possible that we may see him in the NBA before he finishes his season with Montakit Fuenlabrada.