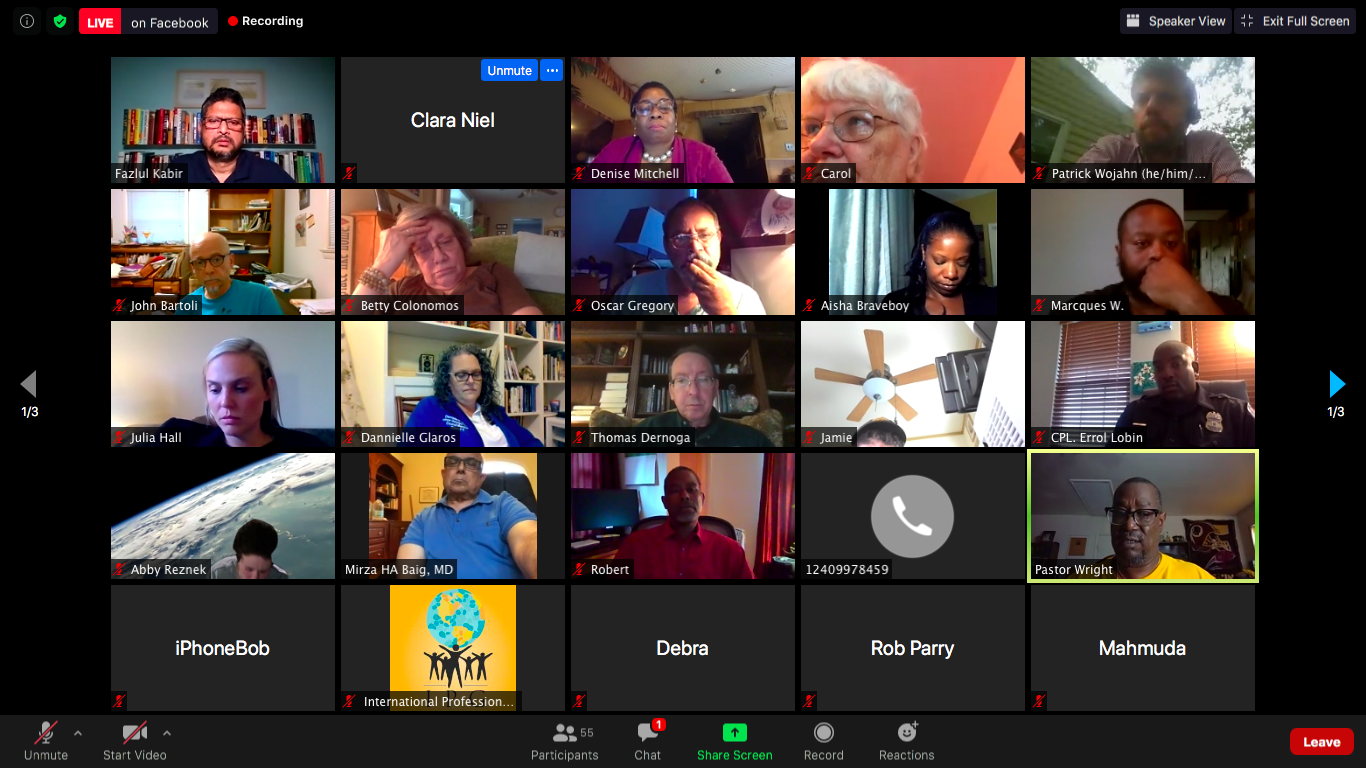 The town hall — which featured eight panelists, including the Prince George’s County state’s attorney and two officials from the county’s police department — comes amid nationwide demonstrations against systemic racism and police brutality. The protests have recently inspired reforms to police departments, including programs to reduce racial and implicit bias and the banning of certain tactics.

Anger, frustration and sadness were some of the many emotions displayed by the panelists as they guided the discussion. Many delivered powerful anecdotes of their own experiences with law enforcement, emphasizing the need for change in the system.

Stephen Wright, panelist and pastor at the First Baptist Church in College Park, recounted the time in 2007 when his wife and daughter got pulled over for driving a 1989 model car. They ended up walking away with a ticket for a safety violation because their car window couldn’t roll down, Wright said.

However, messages of hope for a better future were also mixed into the discussion. County State’s Attorney Aisha Braveboy said there is a lot to be done in terms of improving police relationships with the city community — and that the conversations held during the town hall are a necessary part of that progress.

And Thomas Dernoga, who represents District 1 in the Prince George’s County Council, expressed appreciation for the opportunity to hear from the people directly affected by systemic racism.

“I’m here to listen and learn,” said Dernoga, who is white. “Even though the Prince George’s County Police Department has made strides, I know there’s more that we need to do.”

Residents kicked off the discussion by expressing concern over policing tactics within the community, mentioning the tactics used by the police officer who arrested George Floyd. Floyd, a Black Minneapolis man, died after a white officer kneeled on his neck for over eight minutes. At the town hall, residents asked the panelists about how the use of excessive force is regulated in Prince George’s County.

There isn’t a national standard for monitoring police use of force, and every police department has different rules and regulations, said Dannielle Glaros, who represents District 3 on the Prince George’s County Council. However, she added, chokeholds and strangulation techniques by police are forbidden in the county.

In addition, officers must exhaust all other means of de-escalating a situation before firing their weapon, and they have a duty to intervene should they see another officer infringing upon the civil liberties of another person, she said.

Councilmember Mitchell also asked the panelists what police academies were doing to eliminate implicit biases held by their students and reduce racial profiling.

For the past four years, Dernoga said, the police department has issued implicit bias training, based on the curriculum created by a University of Maryland sociology professor. Officers of higher rank also get leadership training that aims to bridge cultural divides. Additionally, certain divisions within the department concentrate on mental health issues, he said.

Residents also raised questions about transparency within police departments in the city and county. Depending on the severity of the alleged violation, the person filing a complaint may never know how it was resolved or if it was even considered, Braveboy said.

Sensitivity training for officers would play a big part in helping the department and the community move forward, she said. Even with its diverse ranks, there is still systemic racism in the department, she said — Black officers know even they could be racially profiled and find themselves targeted by the police, should they leave their house without their uniform on, she added.

Pushing further into the discussion, Mitchell asked the officers present to describe their definition of community policing and their plans for building trust in a diverse community.

One of the officers, Capt. Katina Gomez, said she’s served in the department’s community services division for nine of the 15 years she’s been a police officer. She said she interprets community policing as law enforcement and the community coming together to achieve a common goal. The foundation of this relationship should be education regarding what’s going on in a community, and communication between residents and police.

“[As] officers, primarily, we all need to know who we’re protecting,” Gomez said. “We’re here to protect and serve you all.”

Inquiries then shifted to what the community could do to better relations between its members and the police department. With protests ongoing, Lakeland Civic Association president Robert Thurston said the conversation needs to continue — and be followed by a deliberate and strategic plan for inclusivity in the city.

Maxine Gross, a former College Park city councilmember, suggested the city prioritize social justice and strongly requested the creation of a restorative justice program for the Lakeland community, to make up for the ways that the city has hurt it over the years.

Leona Chan, a resident of College Park, asked about the contract the county has with the union that represents Prince George’s officers and wondered whether it attempted to prevent misconduct. Gomez was quick to answer, stating the department doesn’t protect bad apples.

Even with the evening’s constructive dialogue, officials emphasized that the community and the department still needed to take action in order to continue working toward equality.

“I think that we still have more work to do,” Braveboy said.