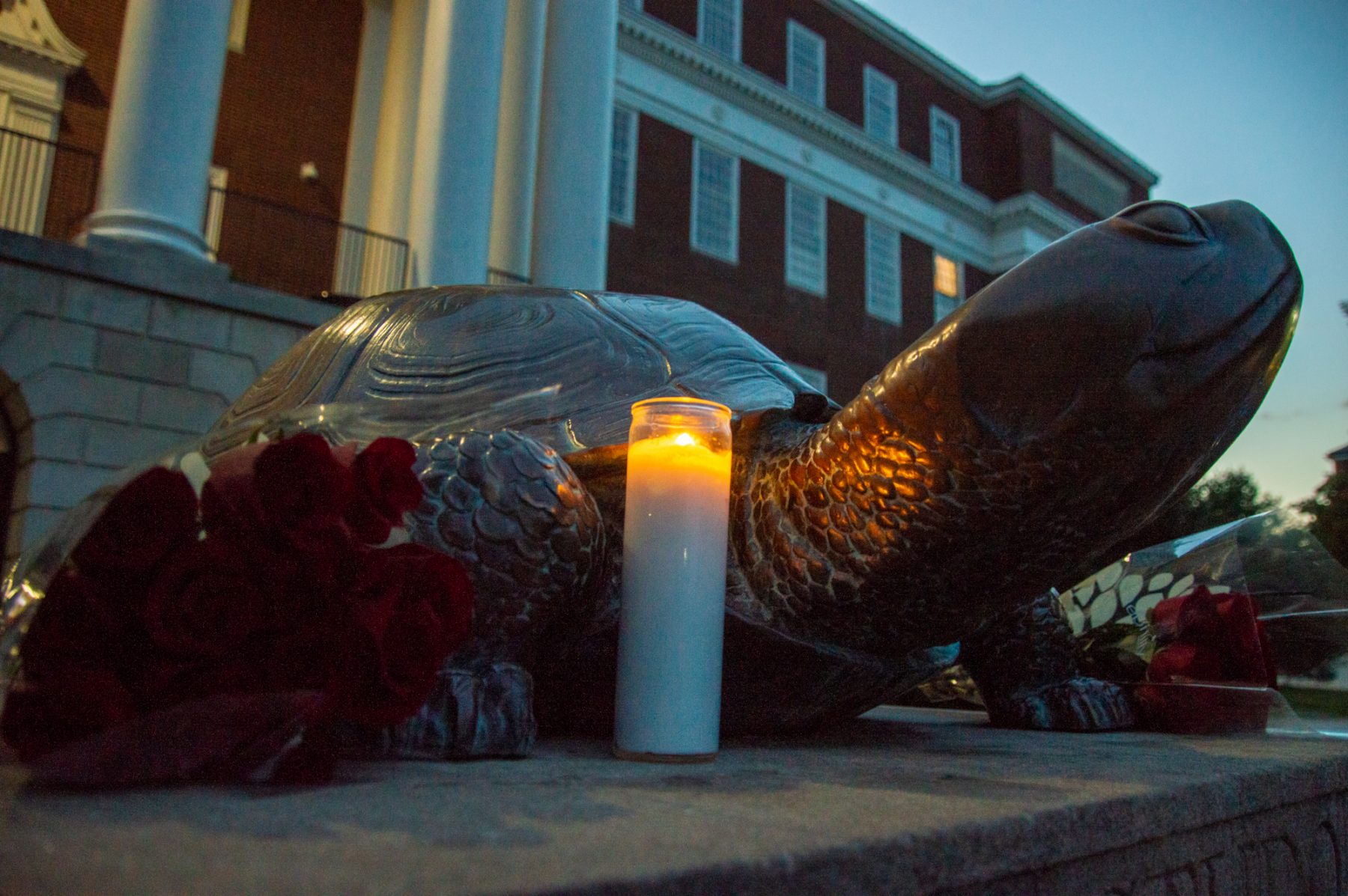 As the sunset washed over the University of Maryland’s McKeldin Mall on Tuesday, a single candlelight burned in front of the Testudo statue pedestal.

Around 7:30 p.m., they started to arrive, some greeting each other by bumping elbows, a gesture meant to limit contact in the ongoing coronavirus pandemic. Others, though, made exceptions to social distancing practices and embraced one another.

All of them wore masks.

Initially, Deloatch said, the department wasn’t planning to promote the memorial — Prince George’s County has only just begun to reopen after being under a stay-at-home order for months. But then, former students of England’s — dating back to when he was still a graduate assistant at this university — started calling.

“We thought it was really, really important despite what we’re dealing with in this unprecedented pandemic, to gather and share and remember and reflect on Jonathan England’s legacy,” Deloatch said.

[“It feels like a void”: Grief through the eyes of one UMD student in the age of COVID-19]

At the vigil, Deloatch invited people to share their experiences with England. Overwhelmingly, those in attendance remembered him as a man devoted to social justice and passionate about African American studies, a man who was an ally to the black community but never overstepped in his activism. People shared their stories of England’s authenticity and kindness, and everyone nodded along.

Normally, Jason Nichols said, he doesn’t trust people who are liked by everybody. Those people must be lying, he said, or just saying what people want to hear.

But not England. Everybody liked him, and yet, he was “the most authentic man in the world,” Nichols said at the vigil.

And, the African American Studies lecturer said, England was his closest friend.

“I know that there is something, some kind of lesson in [his death]. I’m not ready for it yet, but I know there’s probably something that we’re all going to take from this,” Nichols said.

Nichols had told his friend that he was the greatest teacher he had ever seen, he said, but he never told England he loved him.

“If he’s listening, I love you so much,” he said during the vigil, looking up at the sky. “You were the brother I never had.”

Students in the gathered crowd remembered England as a faithful mentor — one who would give his cellphone number to students and encourage them to reach out if they wanted to go over an assignment or discuss an injustice that was going on in the world.

One of England’s former students, Jamie Tyson said she was led to take more of the professor’s classes after seeing the passion he displayed in an introductory course. Eventually, she became a teaching assistant for that class.

“He was always there for everyone in the department, all the students and even the larger community,” the rising senior African American studies major said, her voice starting to break.

Still other students exalted England’s kindness and intelligence, calling him one of their biggest supporters at the university and saying they would remember his love for Prince George’s County and his terribly colored PowerPoint slides.

And at a time when protests against police brutality and systemic racism are in full force across the country, some said his loss is especially painful.

But at the end of the memorial, Deloatch reminded those in attendance of England’s passion for getting people to register to vote.

“I know right now is difficult. I know it’s hard. I know you’re angry. I know we are enraged,” Deloatch said. “Your voice still matters, your vote matters … You matter. Please don’t forget that.”