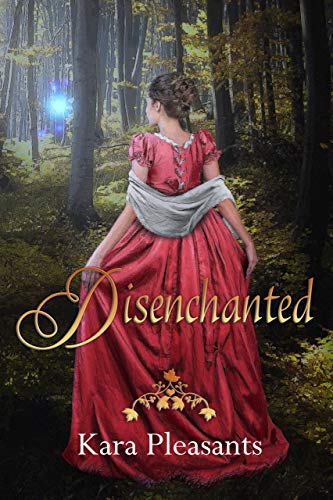 The cover of Kara Pleasant's novel, 'Disenchanted.' (Image via Amazon)

Every student has a different idea of what their senior year of college will look like. For some, it might be making the most out of those precious last tailgates and parties. For others, it might involve a dream internship or focusing on the search for that first post-grad job. For University of Maryland alumna Kara Pleasants, it included writing Disenchanted.

A magical twist on Jane Austen’s well-loved Pride and Prejudice, Disenchanted takes the players in Austen’s world of regency and pomp and adds otherworldly powers. Elizabeth Bennet becomes the daughter of a poor country squire who is immune to magic and can unravel spells. Meanwhile, the mysterious villain, the Thieving Necromancer, is wreaking havoc on their world. These magical elements are woven into the classic storyline seamlessly — it feels natural, not like a forced rewrite.

As a fan of Austen, this novel was a ridiculously fun read. Though you don’t have to know the Pride and Prejudice storyline, it certainly makes the novel more enchanting if you do. And it was a lot easier to read than Austen’s original prose. It felt like a gathering of all the best parts of the story, with much less of the frilly language — and fewer superfluous descriptors — that Austen is known for.

[Review: Hulu’s ‘The Great’ begs you to love and hate it, but mostly love]

The novel originated on an Austen fan fiction website, where Pleasants posted her writing chapter by chapter. Though Pleasants wrote the book during her senior year at this university over a decade ago, it wasn’t until this past fall that she decided to publish it. Seeking the best Austen adaptations available, publishing company Quills & Quartos, expressed interest in the story, and she agreed.

At first, Pleasants didn’t believe that what she had written was a “real novel.” Because writing fan fiction was supposed to be fun, she didn’t put the same pressure on herself as she wrote. But when she wanted to write something “real,” she felt she didn’t have that same kind of creative freedom.

“It’s empowering to accept yourself as a writer — and fan fiction writer — and let go of some of those unrealistic expectations,” Pleasants said.

The second half of Disenchanted was more enjoyable than the first, primarily because it featured more variation on the original plot. The novel might have benefited from a few more twists overall, but ultimately the old and new storylines meshed well. And potential spoiler alert — the villain’s identity was definitely a surprise to me.

[How ASMR has helped my quarantine-related insomnia]

When you think of an Austen book, feminine empowerment may not be the first theme to come to mind. However, Pleasants wanted to more deeply explore the frustration that Elizabeth and other female characters experienced about the expectations the world had for them. She weaves feminism into the fictional and primarily male-dominated world in a way that bolsters the whole story.

“Every time there’s action, the female, she’s pulled back. And it’s not until she’s actually allowed to be in the action that you can have this resolution to the story, because it had to be both of them, as equal partners, not him saving her,” Pleasants said.

Not only is Disenchanted an enjoyable tale, but Pleasants’ own story of setting aside self-doubt is inspiring. If you can let go of unrealistic expectations, you can accomplish things you may have never expected. Especially in this time of uncertainty, it’s important to not be overly critical of yourself. Who knows, you might have a novel or another grand project in you waiting to come out.

Disenchanted is available on Amazon, and you can see what Pleasants is up to on Instagram @pleasantauthor.