I’ve been a senior at UMD for 25 years. Here’s what I’ve learned. 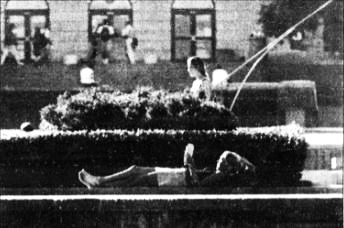 A University of Maryland student on McKeldin Mall in 1995, the year the author's last column was published. (Nick Wass/The Diamondback)

My senior year didn’t quite turn out as I expected it to.

I know, I know. I’m not alone. The past seven weeks have demonstrated this by putting us all in a new academic and social environment. It’s changed the way we attend lectures, study and take exams. This was a surprise for all of us.

But I’m talking about something different. I expected my senior year to end in 1995. Instead, it’s ending in 2020 — 50 semesters later than intended. Better late than never, right?

Back when I was originally at the University of Maryland in the mid-90s, I wrote a biweekly column for The Diamondback. I discussed my take on campus life as a student trying to find himself in his studies and extracurricular activities. I tried to be cute and clever, slipping references to Easton 4 into each column as an homage to my freshman dorm. I once wrote a parody of Edgar Allen Poe’s “The Raven” about the goatee I couldn’t grow very well.

And, exactly 25 years ago today, I published what I thought would be my very last column for The Diamondback. It discussed my journey through this university and its ups and downs. It charged people not to judge each other on their unique paths. And it was my march onward — to graduation and beyond!

Or so I thought.

I was very close to graduating. I only had a few credits left to take. But I had also been struggling with undiagnosed anxiety, depression and ADHD. I found myself engaging in toxic relationships and participating in self-destructive behavior. After a long period of reflection, I decided that I needed to detach myself from that environment. So I withdrew from college and started working, knowing that I could go back the next year and finish up my degree.

But that next year, things were just too busy for me to go back. So I pushed it back another year. And another year. The decision to return to school and get my degree became more and more distant as the years went by. There were more responsibilities that had to be prioritized over school. Soon, I had a family and a budding career. The thought of being able to juggle school among it all seemed impossible. I felt shame for not having finished my degree, and eventually despair and hopelessness. I was grasping onto a job I really didn’t like much because I was afraid to leave for fear that I couldn’t get another. My mental health worsened, and my spouse eventually pleaded for me to seek professional help.

And I did. I started treatment for anxiety, depression and ADHD. I underwent cognitive behavioral therapy to learn to mitigate my negative thoughts. And I thought about my goals, about what I wanted to do with the next chapter of my life. I wanted to go back and give it another shot.

I was readmitted to the University of Maryland in January. I commuted to campus several days a week, one of which extended from 8 a.m. to 9 p.m. It’s humbling when you’re a 47-year-old senior in a lecture hall filled with peers in their 20s. Or when your instructors are significantly younger than you are. Or when your lab partners are only two years older than your own son. I knew how much I stuck out as the old guy.

But I kept going. I attended every single one of my classes. I went to study sessions. I worked out at Eppley before everything moved online. After I finish this semester, I’ll have two more classes to take over the summer, and then I’ll finally have the degree that’s been missing for the past 25 years.

My outlook is certainly different. At 22, I wish I had been more open to obtaining help when I needed it. To realize that I wasn’t alone in my struggles to cope with an environment I felt was swallowing me up. And I wish it hadn’t taken me such a long time to return. But I can’t change the past. And I’m here now.

On this date 25 years ago, I wrote a column encouraging students to embrace their own unique paths through this university and not to judge each other for the choices they made through their individual journeys. I just had no idea how unique my individual journey would be.

This is my very last column. I mean it this time.

Mike Scheinberg is a senior psychology major. He can be reached at mike.scheinberg@gmail.com.