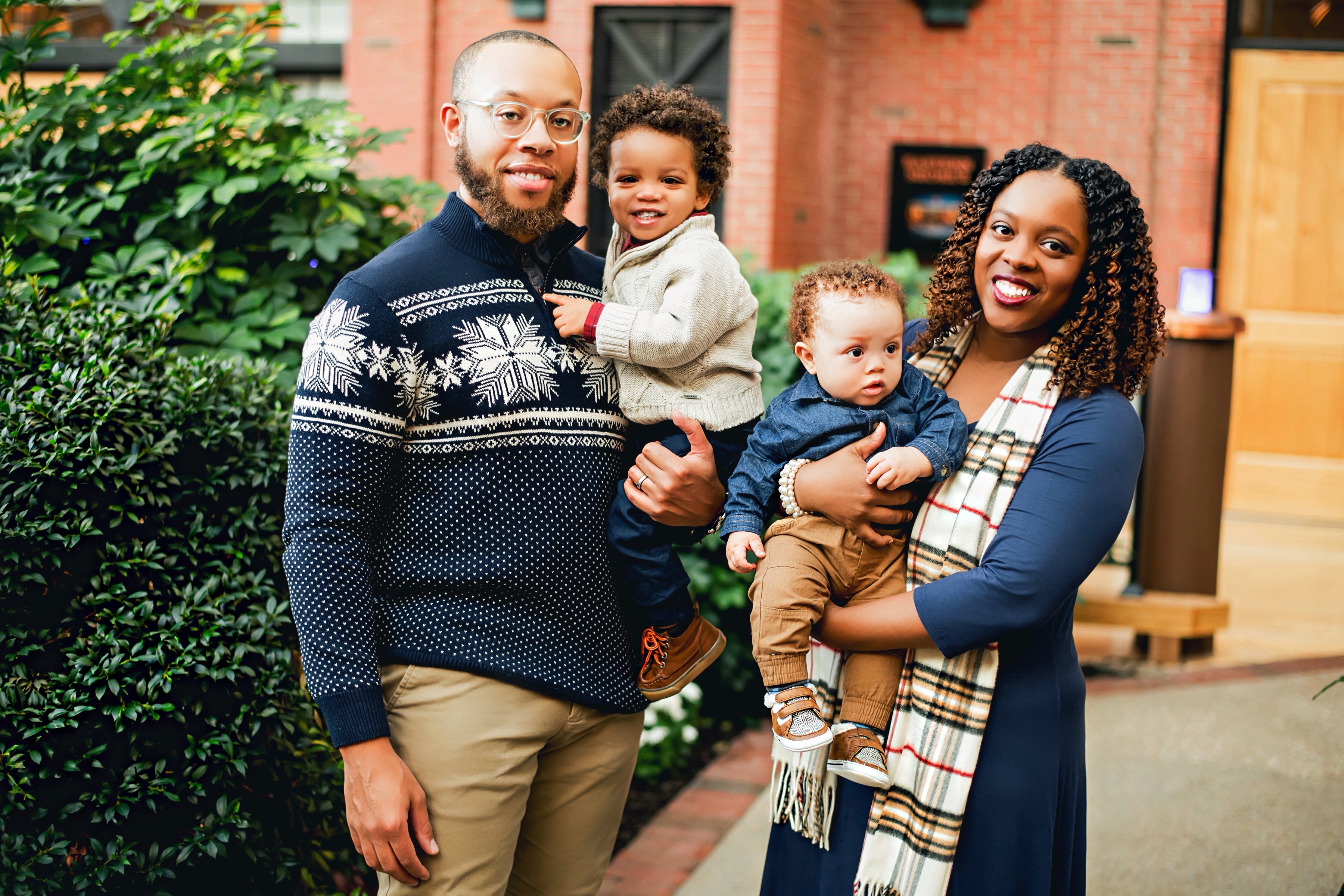 Ebony Toussaint, a public health doctoral student at the University of Maryland, stands with her husband and two sons. Toussaint and other College Park parents recently created a petition calling for the university to make a childcare center opening near campus more affordable. (Photo courtesy of Ebony Toussaint)

Elizabeth Massey, a musicology doctoral student at the University of Maryland, is all too familiar with just how hard it is to track down affordable childcare options in College Park.

A few months after her daughter was born in March 2018, she started looking into daycare facilities in the area, cramming the research — as well as grading and answering emails for her assistantship — into nap times. Then, a month before the fall semester began, she got the call: there was an opening at a center in Hyattsville.

“They said, ‘Okay, you’re the 12th person that we’ve called today and whoever gets us the money first gets the spot,” Massey recalled. “So I got in the car immediately.”

That year, Massey and her husband paid $1,440 per month for their daughter to attend the Loving 2 Learn Child Care Center — a cost, while being on the cheaper end in the area, still consumed almost all of what Massey made each month as a teaching assistant in the university’s music school.

So, when she heard that the university was opening a child development center in the area, she was excited, expecting the daycare to offer a lower rate to Maryland community members. Then she caught wind of its monthly tuition: ranging from $1,360 for preschool and $1,925 for infant and toddler care with no discount for university staff, faculty or students.

“That’s, like, super expensive, no matter what you’re making out here, honestly,” she said with a laugh. “I mean, it’s exorbitant compared to other places around here.”

This hefty price tag flabbergasted some at the university, where graduate students on 9½-month assistantships can earn as little as $18,791 per year — which comes to around $1,978 per month. Frustrated by the lofty rate, a group of parents mobilized to create a petition calling for the university to make the center more affordable. As of Tuesday evening, it had 359 signatures.

[Read more: A new preschool is set to open in College Park next year]

The petition criticizes the university for choosing such an expensive childcare provider and for not offering discounts to faculty, staff or students — especially after it invested millions to help the city of College Park renovate the former school building on Calvert Road that is set to house the University of Maryland Child Development Center.

In an emailed statement, Bright Horizons Family Solutions — the childcare provider selected by the university — praised the services set to be offered by the center.

“The program is focused on providing the highest quality early education, with the teaching team nurturing each child’s curiosity through thoughtful, age-appropriate experiences through intentional guidance and rich experiences that move children along their journeys by building on individual strengths and talents,” wrote Stacy Ginsberg, the company’s regional manager.

A university spokesperson deferred to the Bright Horizons statement for comment.

Ginsberg added that the center’s tuition fell in line with other childcare centers in the area. However, the rate at the soon-to-open Monarch Preschool nearby is more than $100 lower than what the center plans to charge for preschool.

The parents behind the petition also brainstormed 12 measures the university could take to make the center more affordable for campus community members, such as offering an income-dependent child care subsidy or allocating a number of spots with enrollment priority to low income faculty, staff and students.

Taking these steps would allow a diverse range of individuals to take advantage of the center, and could even welcome a more diverse student body to campus, said Alexandra Tyukavina, an assistant research professor in the geographical sciences department who helped create the petition.

“It’s going to be a nice space for kids, and why can’t it be accessible?” she asked. “I mean, I’m not saying make it free or something, but at least reflect the median prices for P.G. County.”

Ever since Tyukavina became pregnant in 2018, she’s been following the facility’s renovation, and even attended an information session for the center with her husband and 11-month-old daughter earlier this month.

When a Bright Horizons representative revealed what the center’s tuition would be at the end of the session, Tyukavina was shocked — even though she and her husband would be able to afford the cost now, she said that wouldn’t have been the case when she was a doctoral or postdoctoral student at the university.

“We chose to live in College Park, hoping that this area is going to improve for people like us, who want to live closer to where they work, and help this area thrive,” she said.

Vexed by the high tuition, Tyukavina wrote up an open letter to university officials and the College Park mayor and shared it on a local parenting listserv. Immediately, she said, she started hearing from folks with similar concerns — parents who shared stories of struggling to afford childcare in the area. Wanting to take further action, Tyukavina pulled together their feedback and set about drafting the petition.

Along the way, she was joined by a handful of other parents, who helped brainstorm and tweak the petition’s language.

Ebony Toussaint, a health policy and management doctoral student and mom of two, got involved after hearing what the center was set to cost parents — news that came as a real disappointment because she had originally been cheered that the university was opening a childcare center.

Now, Toussaint is hoping the petition will spur the university to have a discussion about childcare costs and equity.

But Tyukavina knows she and other parents will have to act quickly if they want things to change at the center, which is planned to open this summer. Since the demand for childcare in the area is so high, she expects that the 120 spots offered by the center will quickly be filled by the kids of parents who can afford its cost.

Originally, Tyukavina was planning to share the petition with incoming university president Darryll Pines at a listening session he was scheduled to host in April. But with the novel coronavirus ripping through the country, Pines has put the planned listening sessions on pause.

Now, Tyukavina hopes to share the petition on the website Pines’ transition team is using to collect feedback from the campus community and circulate it over email to university and city officials. She’s planning to email them every week until she receives a response — then, she says it’ll be up to them to form a workgroup to tackle the issue.

Working on this petition has been important to Tyukavina. It allows her to take a bunch of mental and emotional energy she had previously been expelling on frustration and channel it toward a constructive goal. Not only that, but it has also given her a sense of purpose in an uncertain and frightening time.

“I think at some point, for me, it’s like a coping mechanism [for] all the anxiety that surrounds me,” she said. “At least doing something that potentially, hopefully benefits someone other than me in this kind of scary situation that we’re in.”