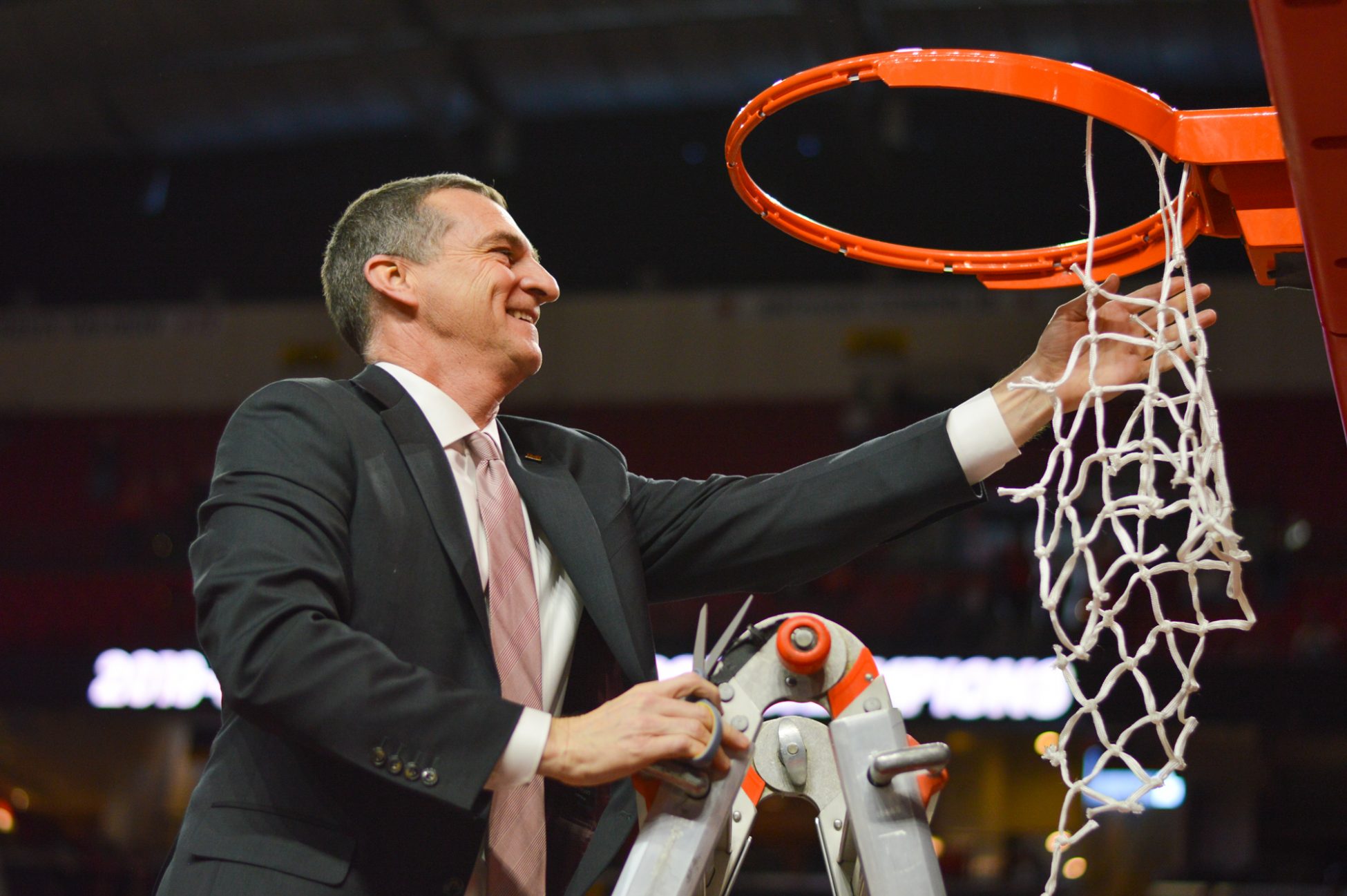 Maryland basketball head coach Mark Turgeon cuts the net after winning a share of the Big 10 title in an 83-70 win over Michigan at Xfinity Center on March 8, 2020. (Joe Ryan/The Diamondback)

It was Saturday morning, less than 48 hours after the NCAA announced the abrupt end to the college basketball season in response to the spread of the coronavirus. Where was Maryland men’s basketball coach Mark Turgeon?

He was cleaning out a closet. Then he moved to organizing a storage room. Next, he worked out. All in a day’s work, right? Wrong. It was only 10:30 a.m.

[Read more: It didn’t go as imagined, but Anthony Cowan’s career still had a “storybook ending”]

Turgeon is adjusting to the new reality of social distancing in the face of the pandemic. Like most of the population, he’s searching for anything he can do to stay productive. And as is the case for many in the working world, he’s trying to do what he can while operating remotely.

Last Thursday, just hours before the team was set to board a plane en route to Indianapolis for the Big Ten tournament, the conference announced that the tournament would not continue, effective immediately.

Later that day, the mounting cancellations around the sports world hit the NCAA tournament, ending the season as a whole. There was a sense that the situation was headed that way, but it still stung teams across the nation.

“As you see this coronavirus grow, you know that the NCAA made the right decision,” Turgeon said. “It was tough at the time, but it was the right thing to do.”

The following day, Turgeon and his team assembled for what was originally meant to be a logistics meeting. The conversation was intended to be about remaining obligations for classes and their plans for home.

Naturally, the conversation drifted to the end of the season. Coaches spoke and each player took the floor to share their thoughts as the team reflected on the year that was.

“I don’t know if it was a celebration, a funeral or however you want to say what it was. But we all talked, we all laughed, we all cried,” Turgeon said. “I think it was kind of a healing deal for us, and it really helped us move on.”

College basketball’s absence around this time is still naturally strange for somebody who has been immersed in the game dating back to his days as a player at Kansas. Around 6 p.m. on Sunday, Turgeon felt the anticipation for the selection show that would never air.

He still had curiosity over the potential bracket to see where his team — and other conference foes — stacked up. Turgeon even went as far as asking The Washington Post’s bracket analyst Patrick Stevens where his team and others in the Big Ten fell. Luckily, Stevens released his bracket, a move the NCAA decided against Sunday.

“Just wanted to know,” Turgeon said during an exchange with Stevens on Monday’s conference call. “Glad you had guts enough to put it out. I appreciate it.”

The Terps coach doesn’t know how the tournament would have ended for his team. He acknowledged the possibility of an early exit before mentioning the potential for a Final Four run.

But while he ponders the what-ifs, Turgeon is like the majority of Americans. He’s adjusting to what will be a temporary new normal while the pandemic persists.

Since COVID-19 arrived in the United States, the number of cases has exponentially grown and has passed 10,000 in total across all 50 states. As officials hope to “flatten the curve” and slow the spread, the emphasis is on social distancing and avoiding public areas with large groups of people.

And as the virus continues to spread, Turgeon will keep manning the controls of his Maryland program from the comfort of his home during his time away from the facility and the recruiting trail.

Turgeon stays in communication with his players, calling or texting to check in from time to time. He noted a big adjustment in that sense, given that he’s so accustomed to being very involved in their lives during this time of the year.

“The weird part is just not seeing them,” Turgeon said. “Not seeing guys for two weeks is really unusual, especially during the school year.”

To remain on the same page with his staff moving forward, he’s already had a conference call to “keep the ball rolling,” including an eye on next year, examining the schematics of what his team could do differently.

He also knows that there’s work to do on the roster with open scholarships from forwards Makhel and Makhi Mitchell’s midseason departures. Then there’s also guard Anthony Cowan graduating — unless the NCAA creates a waiver to grant an extra year of eligibility to winter athletes, and he chooses to accept — and the possibility of forward Jalen Smith’s early departure for the NBA.

To fill those gaps, Turgeon will explore the options in the transfer portal and any remaining available recruits. Those overtures will need to happen over the phone, though, as the NCAA suspended in-person and on-campus visits for a month because of the virus.

It’s all different for Turgeon. It’s not just the household jobs of cleaning out closets; it’s everything that comes with running a basketball program.

But he’s aware that the effects of this pandemic extend well beyond a basketball tournament, or sports in general, and he’s looking forward to when normalcy can resume in all parts of society.

“It’s not normal right now. I know everybody feels the same way out there,” Turgeon said. “Whether you’re a basketball coach, run a business, you’re a mom, or whatever — it’s different right now.”