Terps for Bernie members know Sanders’ chances are slim, but aren’t giving up on his ideas 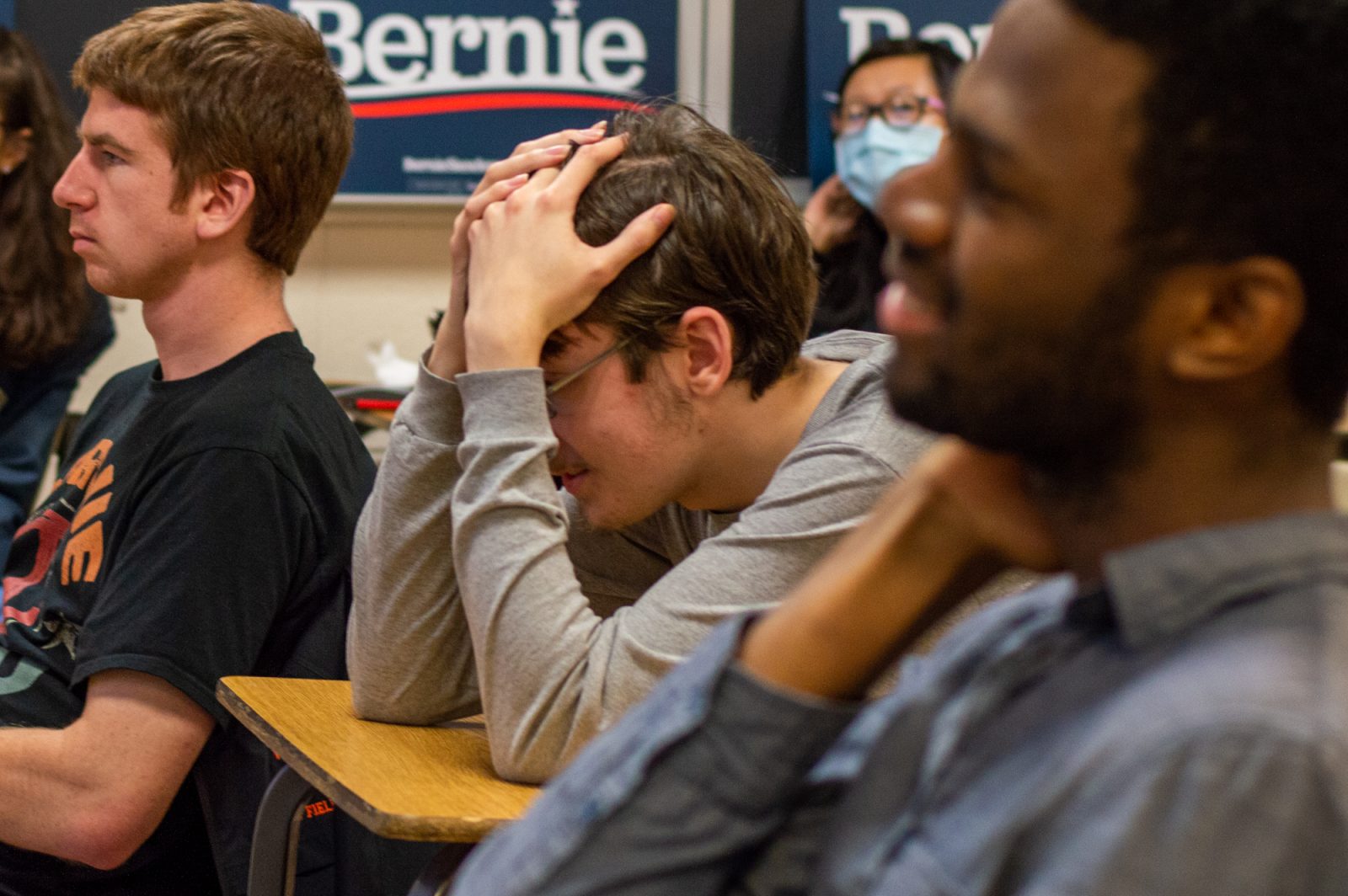 At first, there was hope. But as the night wore on, a collective anxiety hovered over the classroom.

The first results coming in from Mississippi were a warning sign. And by 9:30 p.m., it was all but official.

“So, who’s ready for four more years of Trump?” someone joked uneasily.

The members of Terps for Bernie were gathered in the University of Maryland’s Art-Sociology Building, watching on a projector as six states tallied votes for “Super Tuesday II,” a Democratic primary contest 8 months out from the 2020 presidential election.

By the end of the night, former Vice President Joe Biden beat out Senator Bernie Sanders (I-Vermont) in four primary states — including Michigan, the night’s largest prize in terms of delegates.

Terps for Bernie members said the obstacles that young people face when going out to vote is largely to blame for Sanders’ poor showing. And though the race is far from over, their disappointment last night foreshadowed the possibility of a race without Sanders — and emphasized, they said, the need to continue his progressive movement beyond election day.

“The reason why I volunteered for Bernie, and I dedicated more than 800 hours to Bernie’s campaign, is because I know that — even if Bernie doesn’t get the nomination — the policies that he represents, that he stands for, I’m fighting for those,” said Michael Dunphy, president of Terps for Bernie and a junior computer science and government and politics major.

It was an unexpected twist for Sanders, whose campaign has amassed almost double the funding that Biden’s has, and has an energized, passionate following. But most of that following is made up of young people — a fact some experts say may have a lot to do with Sanders’ recent struggles.

A lack of enthusiasm at the polls is a direct hit to Sanders’ campaign, whose progressive take on student debt and universal health care has attracted mostly younger voters. He was seen as the top choice among college-aged Democrats, but Tuesday’s showing suggests the campaign can’t rely on those students much longer.

“It’s difficult, because I think that Bernie appeals to a lot of students and people of color who are especially suppressed when it comes to voter turnout,” said Ryan Clark, a sophomore government and politics major and Terps for Bernie member.

Although many young people, such as those in Terps for Bernie, appear to be engaged in the political process, many first-time voters and college students cite roadblocks when it comes to voting: antiquated methods of registering to vote, getting absentee ballots sent to schools and struggling to figure out where and when they can vote.

Alex Gregory, a freshman history major who attended the primary event, said that many students simply don’t have the ability to get to the voting booth, especially with a full schedule of classes.

“A lot of students don’t have cars and access to public transport, they’re just doing their finals in general, they don’t have time to go out to the polls,” Gregory said. “There’s a lot of inaccessibility for them.”

Recent primaries have also seen long lines to get into voting centers, especially in places where young people traditionally vote, like college campuses. Students at Texas Southern University reported waiting in line for hours to vote on campus last week.

“If you expect that a kid that has a job or whatever or has class to wait for eight hours in line — they’re not going to be able to do that,” Dunphy said.

Gregory Sarafian, a sophomore information science major, watched with Terps for Bernie as the results poured in. Sarafian was the campus leader for Yang 2020, an on-campus organization aimed at drumming up support for former presidential candidate Andrew Yang.

He said that young Democratic voters may not be enthused by two candidates whose age makes them harder to relate to. Biden is 77 years old, while Sanders is 78.

“I think generally young people want to see a new vision forward,” Sarafian said. “I don’t think that continually having older people run for office is necessarily going to relate to the younger crowd.”