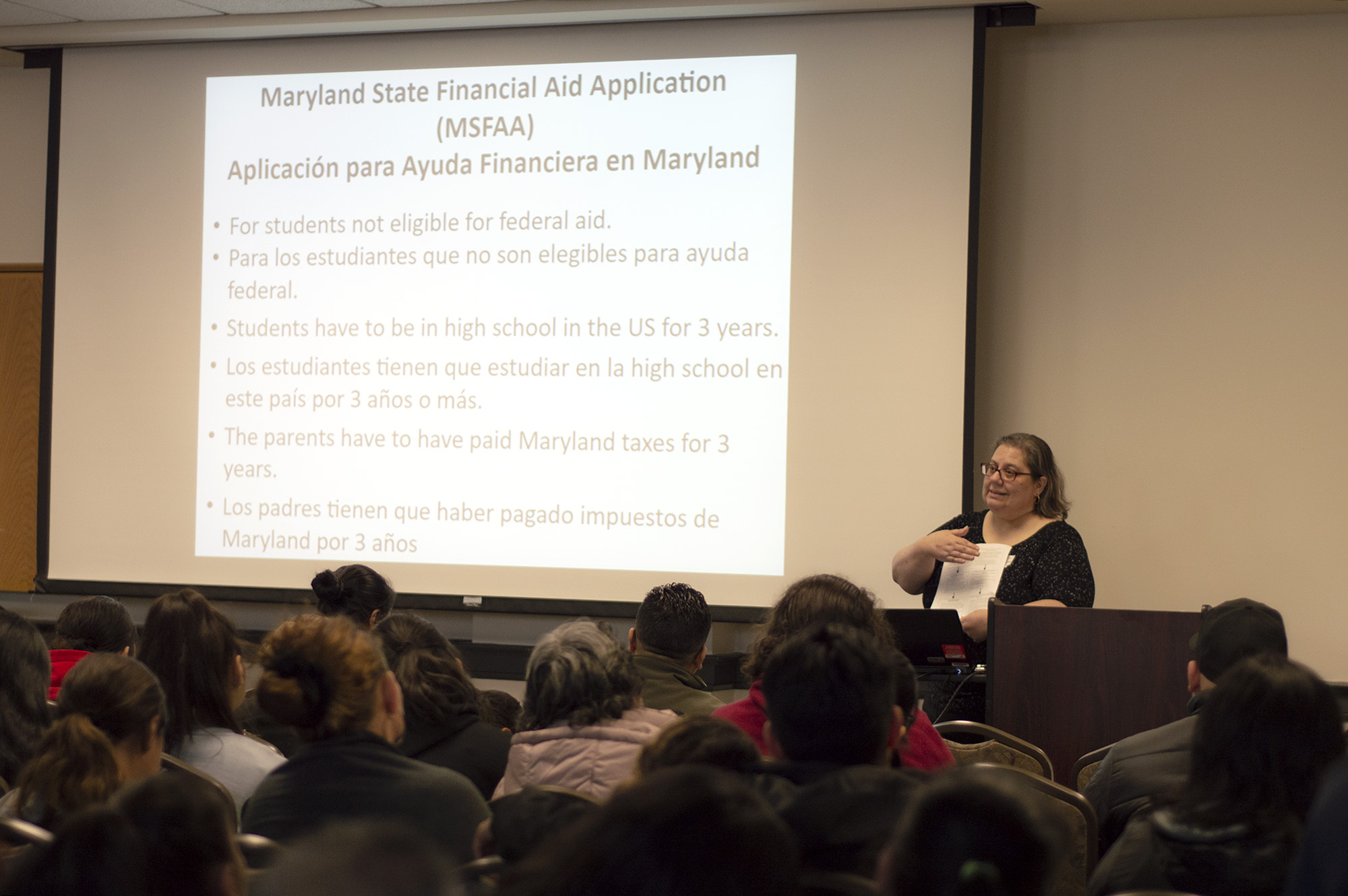 At an event for bilingual students at the Stamp Student Union on March 7, 2020, students were given information about financial aid opportunities such as the FAFSA. (Susannah Outhier/The Diamondback)

The annual event, called A College Education is Within Your Reach, or in Spanish, Estudios Universitario a su Alcance, aims to give prospective students the tools they need to reach their future educational goals.

The university and the county school system were among the event’s sponsors. More than 20 different organizations presented, including the Maryland Higher Education Commission, Census 2020, Court Liaison for Hispanic Services and the ROTC.

“It’s more about to give them a little light at the end of the tunnel,” said Gloria Aparicio Blackwell, the university’s community engagement director. “Information is power.”

Through this workshop, Blackwell said she hopes to bring the Prince George’s County community into the university community.

Hispanic and Latino students make up 36 percent of PGCPS’s student body, but less than 10 percent of students enrolled at the University of Maryland, according to PGCPS and the university’s Institutional Research, Planning and Assessment office.

She also hopes to empower parents and students to take hold of their future.

“Education is the equalizer to bringing communities to the next level of success,” Blackwell said.

Juana Morales, a stay-at-home mom living in Greenbelt, said her biggest concern is how to save enough money to get her children enrolled in an educational institution. She came to the event for the financing tips, she said.

“I came for my daughters,” she said in Spanish. “I need to figure out how to save money.”

“It’s really important that they get [information] in a language that they understand because as you know, college applications and financial aid is a very complicated process, even for a person who’s fluent in English,” she said.

Starting with the 2019-20 award year, the children of undocumented immigrants are eligible to apply for various state financial aid grants and scholarships. They must meet certain requirements, such as their parents having filed state taxes for a minimum of three years. Many people do not know about this opportunity, as it began very recently, Chiancone said.

Wilber Lopez, who emigrated from El Salvador, was working as an interpreter during the event. He lives in Riverdale and went to school in the PGCPS system. He likes to participate in these events to help families out, he said, because he himself was in the same situation once.

“It’s very good information,” Lopez said. “And I think that if we work together as a community, we share it to others, we’re all going to receive all the benefits that are available.”