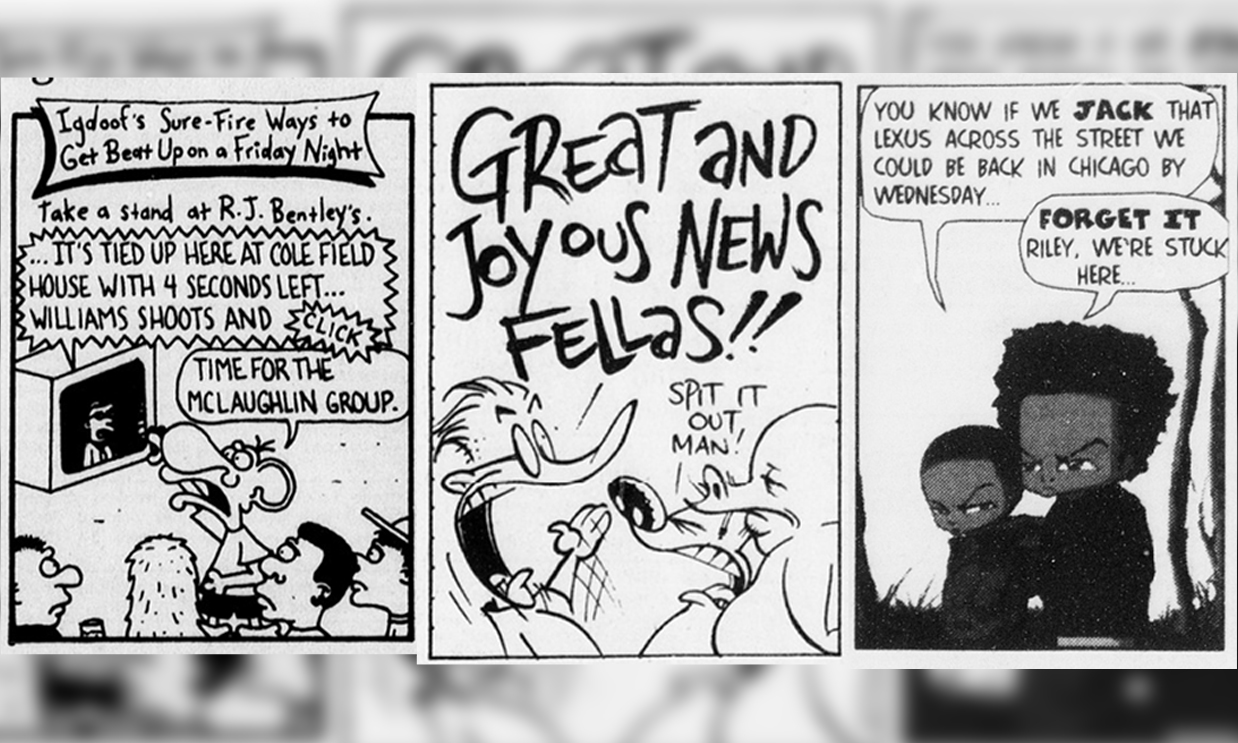 Jeff Kinney, Frank Cho and Aaron McGruder all published comic strips in The Diamondback early in their careers. (Images courtesy of University Archives)

In 1994, Drew Weaver, The Diamondback’s then-editor in chief, explained to The Washington Post: “For some reason, this paper has been a magnet for talented cartoonists. We have so many success stories.” That continued to be the case for many years, as the paper went on to launch the careers of several notable cartoonists.

Jeff Kinney, a Prince George’s County native and 1993 graduate of the University of Maryland, is an alumnus with a talent for penning and portraying. Kinney is the mind behind Diary of a Wimpy Kid, the bestselling book series chronicling the adventures of middle school slacker Greg Heffley.

The criminology and criminal justice major published his comic, Igdoof, in The Diamondback more than a full decade before Wimpy Kid first made its debut on Funbrain.com in 2004.  Though it took Kinney two years to get The Diamondback to publish his strip, it quickly acquired a cult status. After graduation, Kinney tried to syndicate Igdoof, but there were no takers, so he shifted his efforts to Wimpy Kid.

Kinney published the first hardcover book in the series in 2007, the same year he developed Poptropica, a popular online game for children. From there, he published 13 more books in the series and saw it make the big screen in 2010, when the 20th Century Fox-produced adaptation hit theaters.

When Frank Cho transferred from Prince George’s Community College in the early 1990s, he brought his artistic talents to The Diamondback. He published multiple comic strips, including University2 and Everything But The Kitchen Sink.

After graduation, Cho’s syndicated comic strip, Liberty Meadows — based loosely on University2 — was picked up by The Washington Post. Though he graduated in December 1995, Cho’s impact on the student body and The Diamondback was lasting. When The Post stopped publishing his strip in 1998, saying it had “lost its steam,” The Diamondback’s editorial board came out with a column firmly pushing for Liberty Meadows to get picked up again. Ultimately, Cho pulled the strip for good in 2001, citing censorship and creative interference.

Before people all over the country — and eventually the globe — got to experience the sardonic world of Aaron McGruder’s The Boondocks, students at this university got a preview.

The comic strip was published in The Diamondback from December 1996 to March 1997, before a technical error resulted in the printing of the word “OOPS!” instead of the comic strip. When the paper didn’t print a correction, McGruder permanently pulled the strip.

Despite the inauspicious end to its time in The Diamondback, The Boondocks, which follows the life of the scornful Huey Freeman, got picked up for newspaper syndication in 1999 and ran in more than 300 publications. An animated TV series based on the strip made it to Adult Swim in 2005. The Boondocks was ahead of its time, making hilarious racial and political commentary, and all credit goes to the mind (and hand) of McGruder.