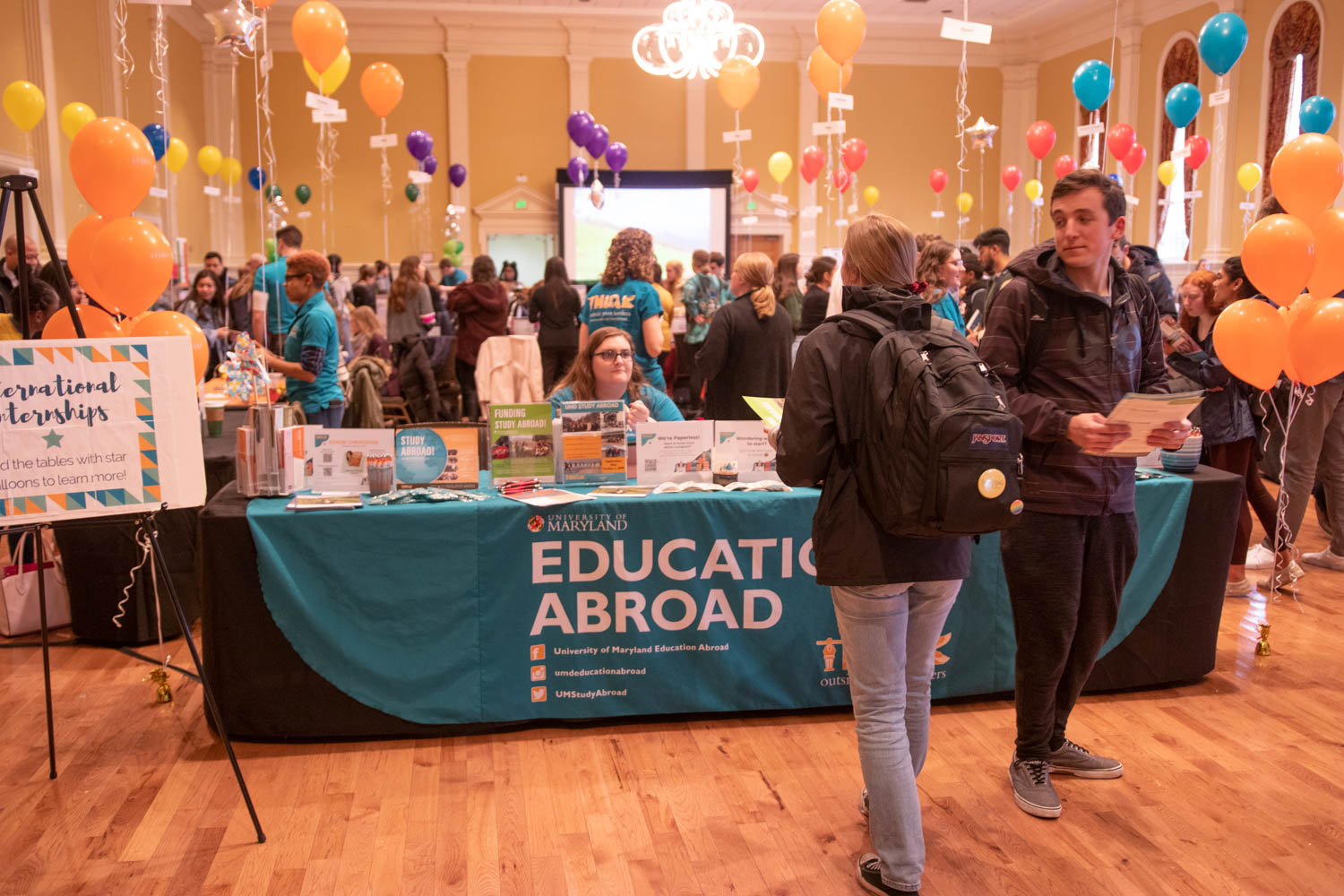 The Study Abroad Fair was held in the Stamp Ballroom on Feb. 5, 2020. (Richard Moglen/The Diamondback)

Lily Nguyen had dreamed of studying abroad since middle school. And when she came to the University of Maryland, she knew where she wanted to go: South Korea.

She was enthralled with the country’s culture, and since her sophomore year, she looked forward to exploring it and practicing its language. She even took a year and a half of Korean classes at this university.

But though Nguyen — who arrived in Korea Feb. 21 — had anticipated studying at Yonsei University for more than four months, she was only able to remain in South Korea for four days.

“Students in these programs will be receiving guidance immediately, directly from the Education Abroad office, regarding return to the U.S. and possible online study options,” a campuswide email about Italy study abroad trips read. “As most students will be completing their work online, we are requesting that they return to their homes away from campus and follow CDC guidelines to self-quarantine for 14 days and seek medical support and advice as needed.”

Students who have had to cut their trips short say the semester ahead is filled with uncertainty. While circumstances differ for each program, some students missed the opportunity to register for on-campus classes, leaving their college careers in flux.

And the unexpected blow has prompted disappointment.

“My mom, she never studied abroad, and she always regretted it. So she told me, ‘No matter what, when you’re in college, you’re going to study abroad, I will let this happen for you,’” Nguyen said. “And then, as soon as I get there, I have to come back.”

At a University Senate meeting Tuesday, university President Wallace Loh said 136 students have been brought back to the U.S. as a result of the virus.

The COVID-19 virus, which emerged in eastern China, has infected over 90,000 people in more than 70 countries. As of Wednesday, there had been 5,328 confirmed cases in South Korea and at least 32 deaths. The country is second only to China in its number of cases, and it’s followed by Italy and Iran.

Nguyen and other students in her program were originally told that Yonsei would allow them to take courses online. However, she later found out that wasn’t the case.

So instead, she sees few options: Find somewhere else to take online classes — which is “up in the air” — take the classes at this university over the summer or graduate a semester later than planned.

“I’m not hearing any other alternatives from my adviser,” said Nguyen, a junior economics and studio art major. “It really all just crumbled apart.”

Chloe Dinman was about seven weeks into her abroad program in Florence, Italy, when she found out she had to come home. It didn’t come as a complete surprise — she said she’d already packed her bags just in case.

“We’re all just sitting here in a foreign country anxiously waiting,” she said.

Dinman will be able to finish the program by taking online classes in the U.S., but she’s still losing money. The university offered students a $500 refund to cover changing flights, but there are other expenses — housing and planned trips — that aren’t covered, Dinman said.

“I was gonna take this time to kind of, grow and expand and learn. And I feel like that’s been completely taken away from me,” she said. “We were all definitely extremely angry and very upset.”

Dinman flew back to the U.S. Wednesday, and she is quarantining herself for 14 days. This university has advised any students whose programs were canceled to stay away from campus for two weeks.

Students on other trips were given the option to come back to the U.S. and register for classes on this campus. One of those was Derek Schoenberger, who was four weeks into his program in Singapore when he decided to come home.

Schoenberger, a junior mechanical engineering major, said he might be out more than $2,000 — which he’d spent on flights and housing — but he was appreciative that this university allowed him to come home.

“There are parts of me that wish I was still there. I think coming back was the right choice,” he said. “I’m definitely glad I had four weeks to experience everything. It just makes me want to go back in the future.”

Meanwhile, the university announced that any countries that reach warning Level 3 will have their study abroad programs immediately suspended.

Japan, for example, has been assigned a Level 2 designation, which advises travelers to “practice enhanced precautions.” Seori Stephens is planning on studying at Kobe University in Japan.

Stephens’ program begins April 1, but she understands that it may be suspended by then. She’s always wanted to study in Japan — it’s where she was born, and her grandparents live there.

In the past few weeks, Stephens has been checking Japan’s threat level every day. Even if she can go, the situation in Japan is not ideal, she said — streets may be emptier than usual and more people are wearing masks.

“It’s been pretty stressful,” the junior environmental science and policy major said. “I was really excited to become fluent in Japanese and speak to people and explore the city. So I’d be really disappointed if I couldn’t do those things.”

Dinman understands these measures are necessary to control the virus, but she said the cancellation has taken a toll on her, and wished this university would offer her more support.

“I know they’re not going to,” the junior American studies and public policy major said. “They were kind of just like ‘you need to come back, but you can’t be on Maryland’s campus.’ They didn’t really seem to care about us at all.”

Even though Dinman is now back in the U.S., she hopes to recreate her abroad experience here. She wants to travel the country, but she understands that may be difficult given how much money she lost.

“This was kind of my semester to get away from campus,” she said. “If I do have these two months, I might as well use them to continue to try learning and growing.”