Since opening in 2016, this UMD center has helped 160 human trafficking survivors 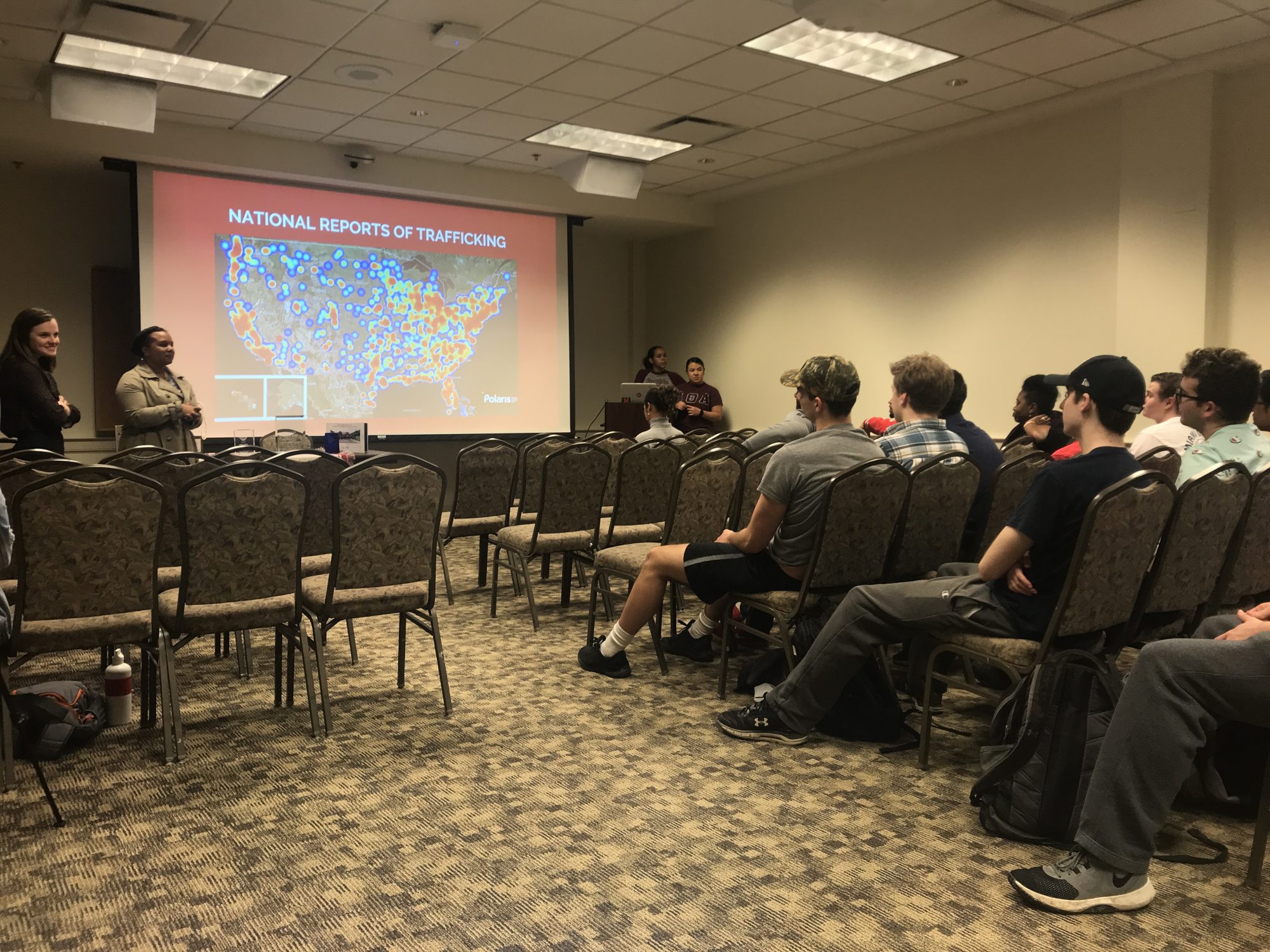 Ellie Lewis Park and Marciel Rojas-Rosario represent the SAFE Center for Human Trafficking at the University of Maryland. They discussed the issue March 4 during a presentation. (Mary Dimitrov/The Diamondback)

The communications and outreach coordinator for SAFE Center for Human Trafficking Survivors asked her audience Wednesday what they knew about human trafficking. Ellie Lewis Park was met with a sea of blank stares.

The SAFE Center — an acronym for support, advocacy, freedom and empowerment — aims to change that reaction through campus events, like the Stop the Traffick event, that educate students and encourage them to get involved in preventing human trafficking. Park and the SAFE Center’s case manager, Marciel Rojas-Rosario, presented to 30 students who attended the event in Stamp Student Union, most of whom were members of Greek life.

Founded in May 2016 as part of an iniative between the University of Maryland and University of Maryland, Baltimore, the SAFE Center has about 15 employees that provide case management, mental health therapy, legal services, economic empowerment and crisis intervention to survivors of human trafficking free of charge.

Although the center’s physical location is undisclosed for safety reasons, it operates as a nine-to-five service center, and is part of this university’s public health school. The center also provides off-site assistance if transportation is an issue.

The presentation shared that, since its opening, the center has served over 160 human trafficking survivors from the United States, the Philippines, Honduras, Mexico, El Salvador, Bolivia, Ethiopia, Guatemala, Nigeria and other countries. Of these survivors, 93 percent are female and seven percent are male.

Survivors are referred to the center by law enforcement, other service providers like schools and the National Human Trafficking Hotline, which is the reason community awareness is important, Park said.

“We want you to feel equipped to make a report if you see something,” Rojas-Rosario said.

Vulnerable populations include addicts, documented and undocumented immigrants and runaways.

“There are very clear systematic inequalities and systems of oppression and discrimination that are fueling trafficking and allowing traffickers to target certain populations and go unpunished,” Park said. “These populations are already being marginalized by our society. They are going unnoticed and they do not feel that they have a voice to come forward and ask for help.”

It is essential to acknowledge the existence of both labor and sexual trafficking to identify and report human trafficking, said Rojas-Rosario.

“Just because it’s not being reported doesn’t mean it’s not happening,” Park said.

“That’s something we’re working on with our research team,” Park said.

However, Washington, D.C., faces its own unique problem with labor trafficking because many diplomats and politicians bring their own staff with them, said Rojas-Rosario.

“When someone is still getting paid but still being trafficked, it’s difficult to identify,” she said.

Presentations like Stop the Traffick are common for the SAFE Center, and its team has provided more than 80 training sessions to the Maryland and Washington, D.C., area to increase trafficking awareness.

“We are interested in making sure students are aware that trafficking is happening, but also that they know their potential discipline might play a role in serving survivors as well as preventing trafficking from happening in the first place,” Park said. “We do a lot with the community on campus to make sure they’re aware of the resource and the issue generally. The event tonight is an extension of that mission.”

The SAFE Center has presented in courses at this university that relate to trafficking and for campus organizations such as Preventing Sexual Assault or Lambda Theta Alpha Latin Sorority, which sponsored Stop the Traffick by providing the space for the event.

“Our purpose as a sorority is to provide social, cultural and political educational programs for the campus, so all our events are mindful of the benefit of campus,” said Joelle Latorre, the sorority’s event co-chair. “Is it something that people can learn from? Is it something that is fun or touches on issues that are going on?”

To educate students, Rojas-Rosario defined human trafficking as “the criminal exploitation for profit of women and girls, and men and boys for commercial sex and forced labor.”

“These are forms of manipulation that often go undetected by the victims themselves before it’s too late,” Park said. “They might not be able to identify that what they are experiencing is trafficking because so much of the common language around trafficking surrounds those force terms.”

Park and Rojas-Rosario encouraged the audience to report any cases of trafficking to the center and to educate their peers on the topic.

“I feel like I am more likely to report a victim of trafficking now because they gave very specific examples of things that could be indicators of some type of trafficking and who is likely to be trafficked,” sophomore math and physics major Michael Thompson said.