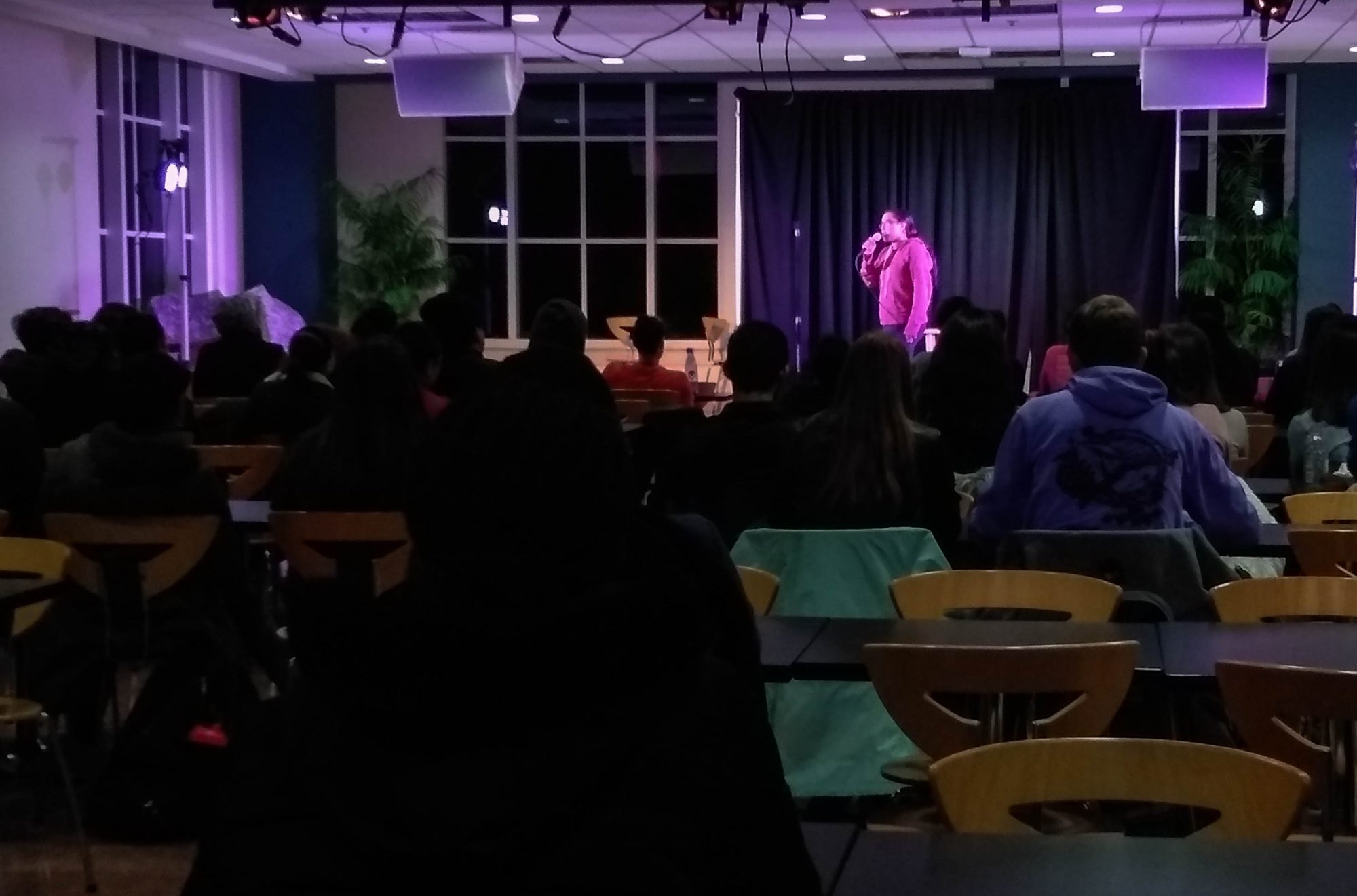 During Rachel Niswander’s first driving lesson, she took a sharp right-hand turn over a concrete median, popped both tires on the same side of her car and ended up crying in a boat yard while her instructor called AAA.

While the sophomore math major isn’t the best at driving, she was a lot more successful at making people laugh on Friday.

“Can someone give me a ride home?” Niswander asked when she was brought on stage as the winner, referencing back to her set, which consisted mostly of her memorable driving experience.

To win, Niswander competed against six other University of Maryland students in front of five judges and about 60 attendees in Stamp’s Baltimore Room.

Topics ranged from junior Sara Nahusenay drawing a pentagram in red icing during her Catholic school’s gingerbread-house-making contest, to junior incoming SEE Comedy Director Sammy Garcia — a moderator in between the students’ comedy sets — joking how the characters on Disney’s Paw Patrol seemed more concerned about the environment than most politicians.

Garcia served as one of the judges, along with Yoad Merin, the incoming SEE president, and three other directors on the SEE Board who volunteered to judge the competition.

“We didn’t necessarily need people who had a ton of experience in comedy. It’s just people who wanted to come out, enjoyed it and could commit to both days,” Merin said.

Fourteen contestants who were chosen on a first-come, first-serve basis competed in the first round of the competition on Feb. 21, before the final six were selected by the judges for the second round.

The only difference between rounds was that the set time increased from three to five minutes in the first round, and then to seven to 10 minutes in the second round.

Niswander never performed more than a six-minute set before Friday, so she added more details, practiced timing and performed in front of friends.

For both rounds, the judges evaluated contestants based on the same three components: material, delivery and crowd interaction and response.

“They’re all really different styles of comedy, and it was hard for us to find reasons for people not to win, so we had to find distinguishing reasons that they should win,” Merin said. “It was a really hard decision, but I think that Rachel’s story is really strong and we saw the crowd got really into it.”

Niswander said the set is typical of what she does in her routines, including acting out different characters in her stories with unique voices and mannerisms, while still trying to make it personal to herself and her experience as a college student.

“I went back to the reserves of my memory to find the most humiliating sort of things that I know I laugh at myself about,” Niswander said. “I was thinking what’s something other people might laugh at and I thought ‘that time I wrecked the car.’”

Niswander will perform a similar set when she opens for Byer.

“I definitely wasn’t expecting this,” Niswander said. “I’ll be nervous for sure, but I think practicing my set more, figuring out where I can add in some more jokes or tweak some little things — just anything to make it better and feel confident going out on the stage.”