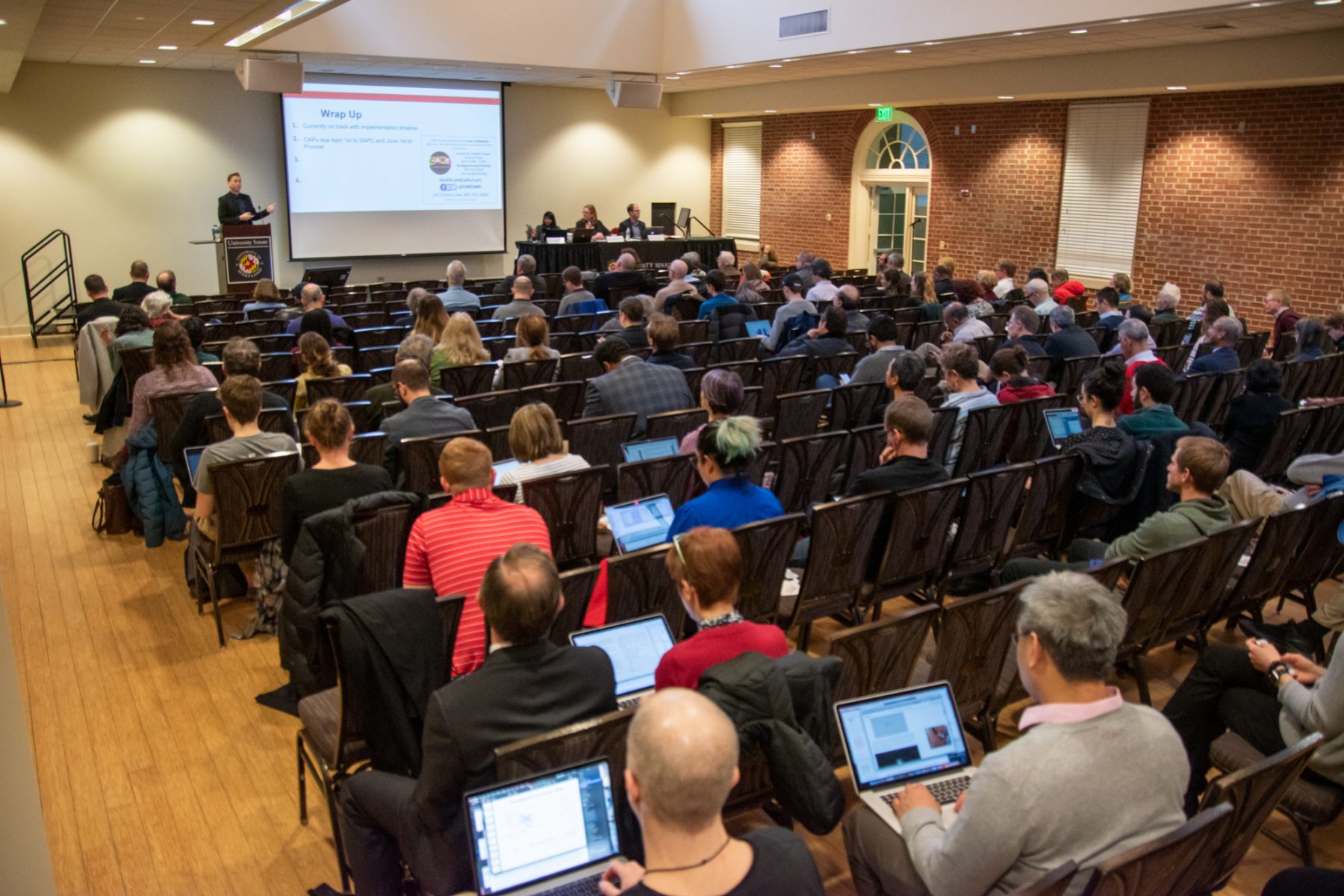 The University Senate meeting in the Atrium of Stamp Student Union on Feb. 5, 2020. (Joe Ryan/The Diamondback)

The University of Maryland Senate is considering a bill that would make all faculty and staff subject to criminal background checks before employment — a substantial shift from what is mandated by law.

Under current policy, the university only requires criminal background checks when federal or state laws demand them, such as for those working in child care or whose jobs involve transporting hazardous materials. This leaves thousands of faculty, staff and student employees who have not been background checked, according to the bill.

“The issue we’re trying to address is safety,” said John Bertot, associate provost for the faculty affairs office and a sponsor of the bill. “We have a number of initiatives with the police department and others that focus on the safety of the campus community, and a background check would be one more piece.”

The bill would centralize criminal background checks under two offices: the Office of Faculty Affairs and University Human Resources. Any criminal convictions would show up on the check, but arrests or citations that didn’t lead to convictions wouldn’t.

Ten out of the 12 schools in the University System of Maryland perform background checks on all or some specific categories of employment, according to results of a survey conducted by this university’s human resources department. Volunteers at some of these schools might also be subjected to background checks.

Under university policy, the school is allowed to perform any background checks “that assist the University in meeting its commitments to keep our campus safe for students, staff, faculty, and the public,” according to the proposal.

The bill, submitted in March of last year, is up for a decision in both the Faculty and Staff Affairs committees on March 30. Then, if it’s approved by both committees and the senate office, it will be sent for a vote to the entire body.

Nick Thompson, an administrative assistant for the mechanical engineering department, never had a criminal background check done on him when the university hired him. He doesn’t believe they’re necessary for his level of work.

The background check policy wouldn’t apply to student employees, Bertot said, because despite being employed by the university, they’re “students first.”

“It’ll catch bad actors, but because it’s relying on a structure that has a known bias,” Sauter said.

In 2016, 27 percent of people arrested in the U.S. were black — double the share black people make up of the country’s population, according to the Sentencing Project. And, on average, black Americans are more likely than whites to be convicted once charged with a crime. The U.S. Equal Employment Opportunity Commission maintains that results of criminal background checks cannot be used to discriminate against candidates.

“It is this moralized judgment that is masquerading as objective,” Sauter said.

Bertot, however, maintained that any criminal background check would be conducted in a holistic manner. Plus, he said, the staffers responsible for reviewing them would consult with campus experts when analyzing the check’s results — bringing in outside perspectives to determine whether an infraction should cost a candidate a job.

“Implementing such checks would provide the campus community with an additional level of safety,” Bertot said.