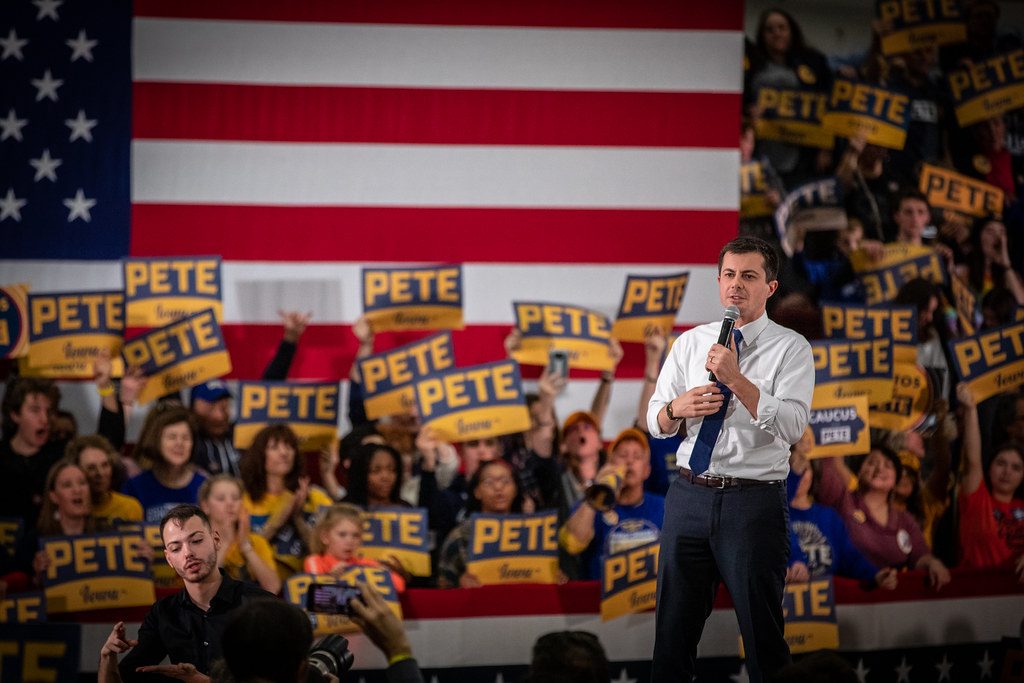 Democratic presidential candidate Pete Buttigieg, who had a strong showing at the Iowa caucuses. Photo via Flickr.

“Medicare for All Who Want It,” Democratic presidential candidate Pete Buttigieg’s sham of a health care plan, is bad for plenty of reasons. But perhaps chief among them is Buttigieg’s insistence that it’s a better choice for union workers than Medicare for All.

The policy proposal touts that those who aren’t happy with their employer-provided or individual health care can choose to “opt in to an affordable, comprehensive public alternative.” A key part of the plan is that often-relied-upon, vague concept of “choice.” Buttigieg has tweeted that “trusting [people] to make the choice that’s right for them isn’t just the right thing to do; it’s how we win.” And, a page on his website titled “Pete Trusts You” — a favor I can’t return, given Buttigieg’s own reneging on Medicare for All — claims his plan will “preserve Americans’ ability to choose what’s best for themselves and their families.” Sure, Pete.

Buttigieg’s dependence on the concept of “choice” in American healthcare, a system already rife with complexities and moral issues, doesn’t really cut it when it comes to organized labor’s health care. Buttigieg, and other conservative-lites, generally say that union workers fought for their health care, and should be allowed the opportunity to keep it. That line of thinking goes something like this: If you trust and respect organized labor, you should be fine with unionized workers’ keeping the employer-provided health care plans they’ve spent a long time bargaining for. Why should the government take good healthcare away from people who tirelessly worked for it?

The problem is precisely that: Unions have to fight for healthcare in the first place. It’s not unreasonable to want to keep what you’ve fought for, but you shouldn’t have to keep fighting for the same thing, over and over again.

Take the Culinary Workers Union Local 226, a Nevada-based political powerhouse of a union, with more than 60,000 members in hotels and casinos across the state. It provides health insurance for more than 130,000 people. The union tweeted a flyer summarizing the Democratic candidates’ stances on some issues, including health care. It implied that Buttigieg’s and others’ plans would “protect Culinary Healthcare” while Bernie Sanders’ and Elizabeth Warren’s plans would “end” or “replace” the union’s existing health care.

After backlash over the criticism of Sanders’ and Warren’s more progressive Medicare for All proposals, the Culinary’s secretary and treasurer, Geoconda Argüello-Kline, put out a statement attesting to the union’s wins for the “lives of 800,000 hospitality workers in 85 years” and doubling down on “the right to choose to keep the healthcare Culinary Union members have built, sacrificed for, and went on strike for 6 years, 4 months and 10 days to protect.”

For what it’s worth, the Culinary Union’s health care plan isn’t that great. Health premiums alone take up at least 20 percent of the average union member’s pay, and there’s still a range of copays even for in-network providers. The fact that the union has fought for still-less-than-ideal health care — has gone on strike for it, even! — means it has spent less of its time and collective bargaining power on other wins for its members.

One major labor critique of Sanders’ and Warren’s Medicare for All plans has been that unions “negotiated health-care coverage under the current system, in some cases ceding salary in exchange for those benefits.” No one should have to forgo salary increases for better health care. Why not both, instead of this ridiculous choice? Why should workers spend years fighting, only to have to take marginal wins on health care, when so much more energy could be spent on a whole host of economic justice reforms, such as higher wages, better retirement plans, better paid leave policies and safer working conditions?

Medicare for All Who Want It leaves health care on the table as a bargaining chip for employers such as General Motors, which cut health insurance for its 48,000 employees who went on strike with the United Auto Workers in September. It’s a misleading attempt to use unions, which are literally forms of worker-based solidarity, to divide voters in the name of so-called “choice” and “freedom.”

Medicare for All, on the other hand, is the policy to support if you truly care about workers. Unions would have more bargaining power if they didn’t have to spend it all on employer-provided health insurance. It’s a plan that would lead to 13 percent savings in national healthcare expenditure and save more than 68,000 lives. It’s not bad politics or policy to want to give workers a real choice — between Buttigieg’s illusion, which decades of labor versus employer bargaining shows us doesn’t work, and a future where workers can fight for all they deserve.