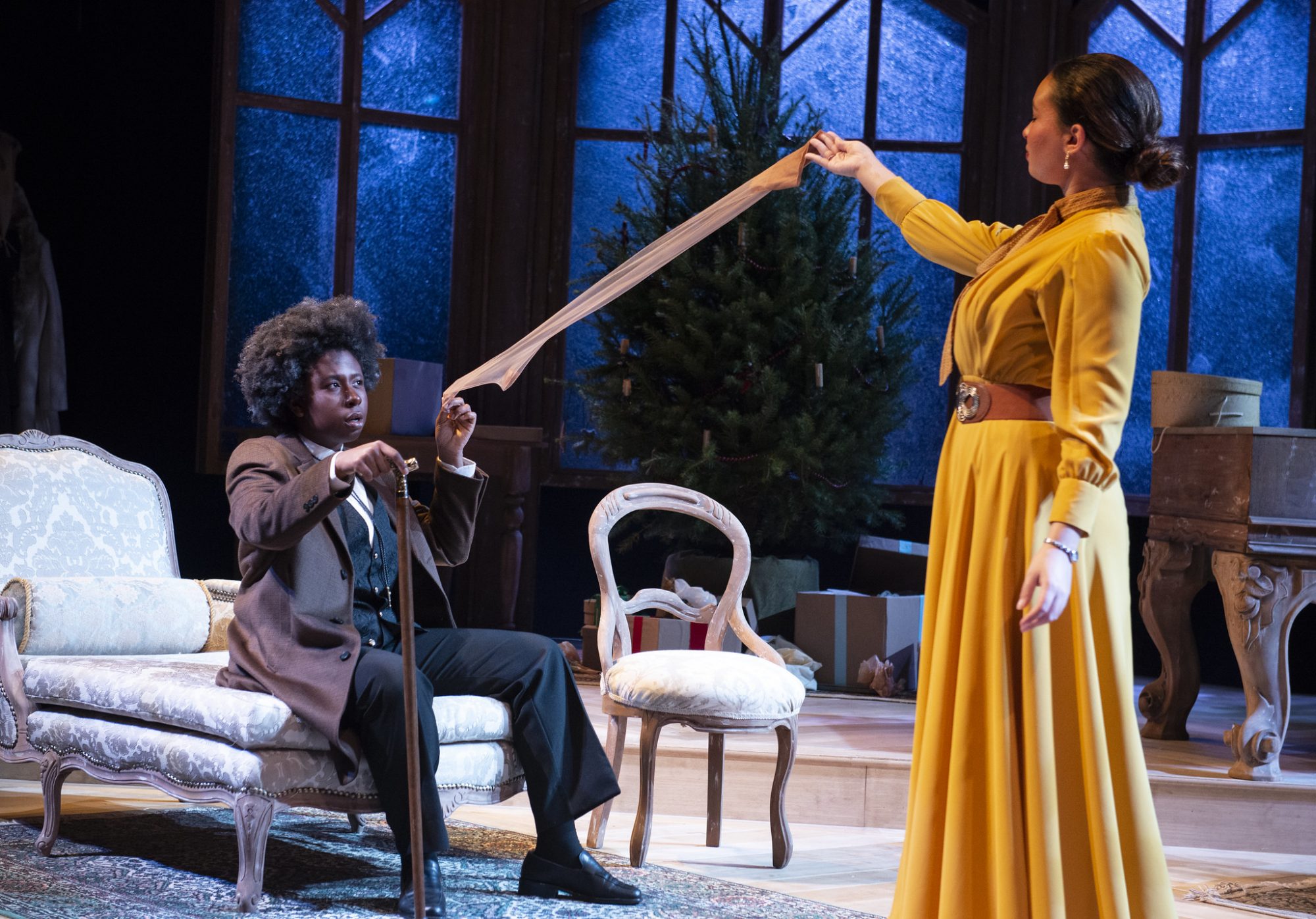 Nora shows Dr. Rank the silk stockings she will wear in her Tarantella performance at the Christmas Eve costume party. (Photo courtesy of David Andrews)

By Brendan Miller
For The Diamondback

“A Doll House,” performed at The Clarice Smith Performing Arts Center this past weekend, takes a look at societal inequalities placed on women and calls on the audience to question existing imbalances that still persist.

“I believe we need this play now, more than ever,” director Kathryn Chase Bryer wrote in the director’s note of the show’s playbill.

The all-women cast for the show — which was produced by the theatre, dance and performance studies school — brought the 19th-century play by social revolutionist Henrik Ibsen to a modern stage, in which male characters were played by the opposite sex.

“It’s an interesting play,” said John Schalow, a Prince George’s County resident. “I found the genders distracting, but I understand why.”

The stage was decorated to resemble the look of a 19th century Norwegian home. Wooden furniture and floors, suspended chandeliers and stained-glass windows brought the set back in time.

“I thought it was really interesting,” said senior anthropology and English major Cameryn Cole. “The actresses make good use out of a small space and the stage feels much larger.”

Ibsen’s play not only illustrated the everyday struggles women endured during this time period, but how people’s actions were often not in accordance with their personal feelings.

“People who live together, who might not be completely honest with each other — it’s a timeless issue,” Schalow said.

The lead character, Nora, struggles with understanding who she really is while dealing with the choices she makes to please her husband and others in her life. Between keeping a marriage-threatening lie from her husband — struggling with who she truly loves — and trying to please everyone close to her, Nora’s personal problems slowly eat away at her happiness.

“It really starts a conversation about how women are treated in society and how women are both equal and as powerful as men are,” junior theatre major Elijah Williams said.

The first and second acts were full of suspense, keeping the audience anxious for the play’s conclusion, while the second act featured an energetic choreographed dance from senior theatre major Des’ree Brown, who played Nora.

“In the age of Me Too, the story is certainly relevant,” Bryer wrote in the director’s note, “but more than a play about women’s rights, this is a play about relationships, specifically of marriage and the masks that we as humans continue to wear despite our love for another person.”