Homeless people shouldn’t be a cosmetic problem for D.C. 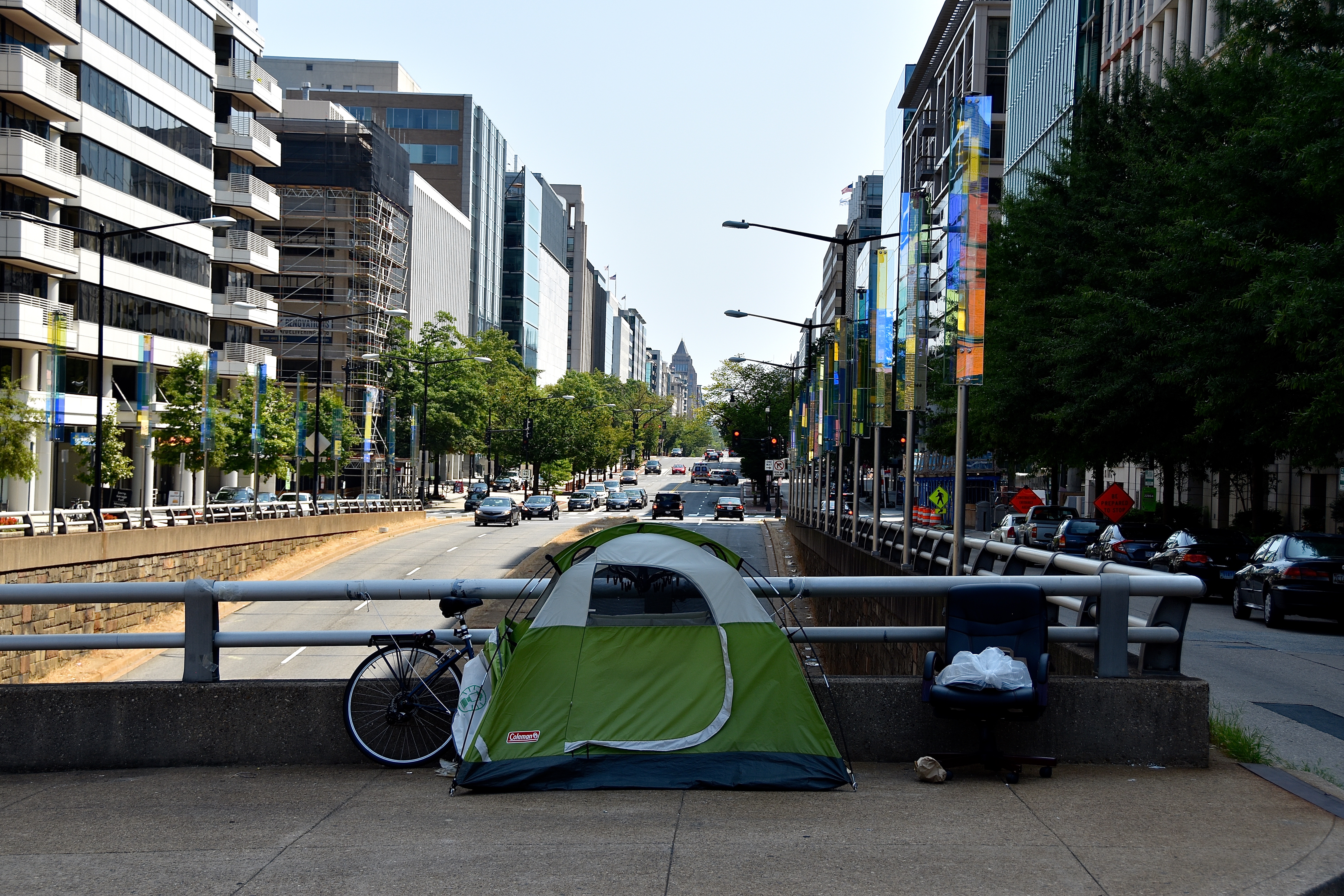 A tent on a sidewalk in Washington, D.C. (Photo courtesy of Peter Dewit)

Washington, D.C., has a homelessness problem. Sure, you say, most major U.S. cities do. But the nation’s capital has America’s highest rate of homelessness per capita. And 66 percent of the city’s homeless individuals were D.C. residents prior to their homelessness, fallen prey to a city that is experiencing the highest intensity of gentrification in the country.

Just last month, a long-standing homeless encampment in an underpass near the NoMa-Gallaudet U Metro stop was cleared. The camp was steps away from a new REI store selling expensive camping tents, in a neighborhood full of new luxury apartments that could go for about $2,000 a month. As D.C. expands to attract more high-income residents, rent and property taxes balloon, and many are forced out of their homes into surrounding areas — or onto the streets.

While the city has made strides to reduce the homeless population, many of its efforts appear more focused on making homeless people harder to see than offering long-term solutions. Clearing encampments, implementing hostile architecture and removing benches does nothing to address the lack of affordable housing that is increasingly plaguing the city. Rather, these temporary aesthetic solutions further displace the homeless and seek to bury an issue that will only worsen the more we literally sweep homeless people aside.

Homelessness is a notoriously widespread and complex issue. In the NoMa encampment specifically, 80 percent of residents reported having a diagnosed mental illness, and 52 percent reported problems with drug abuse. Many residents, when faced with the choice to camp on the street or sleep in a shelter, choose the former due to concerns over privacy and separation from their family members.

Safety is also a factor. Last year, a homeless man was beaten to death by a visitor at a shelter in Southeast D.C. While it’s easy to rebut that life on the streets can’t be much safer, it’s natural for people to gravitate toward arrangements that give more stability than a temporary shelter — and that don’t remove them from an area they’ve grown accustomed to calling home. This speaks to the futility of clearing encampments: If you displace the homeless without giving them stable alternatives for shelter, they’ll still be homeless, just on a different street.

In both Washington, D.C., and many cities across the globe, officials have implemented hostile architecture to mitigate this eyesore of underserved people in “up-and-coming” areas. Often masked as beautification, hostile architecture includes designs like slanted benches to keep people from lying down, or spikes under bridges to prevent people from taking up residence. Its goal isn’t to reduce homelessness, but to make homeless people invisible in areas that are reserved for upper-class people. In Washington, D.C., benches with dividers and bars or benches with slanted or winding surfaces are a way to discourage prolonged use. While not necessarily in the realm of hostile architecture, bench-removal in areas homeless people frequent is another facet of bench warfare against the homeless.

What the periodic dismantling of encampments, the investment in hostile architecture and the removal of benches have in common is that they all treat homelessness as an aesthetic problem. Homeless people damage the image of a city that bends over backwards to attract the mythical “creative class.” Current measures come at the expense of long-term and low-income residents who either move out or are forced onto the streets. D.C. may have made strides to improve services offered to the homeless, but as long as it participates in efforts to conceal homelessness from its wealthy residents, the city cannot develop any long-term solutions to the problem.