It wasn’t supposed to come down to the free-throw line and a game-saving block from forward Jalen Smith.

No. 9 Maryland men’s basketball entered Tuesday’s game against Nebraska as lofty double-digit favorites. The Terps were riding a six-game winning streak, while the Cornhuskers had suffered eight consecutive losses. Coach Mark Turgeon’s squad sits atop the Big Ten, while Fred Hoiberg’s team sits just one prong above the conference cellar.

The Maryland starters may have expected their nights would end early, resting on the bench as the reserves played out the last minutes of a comfortable win. Instead, it was a night marred by frustration for the Terps, one that’s only redeeming quality was the result — a 72-70 victory.

“It’s not the so-called ‘big game,’ but we’ve got to look at it like that,” guard Anthony Cowan said. “We’ve got to approach the game like it’s our championship every game, and we didn’t do that tonight.”

Despite its record, Hoiberg’s team had already shown a penchant for an upset. The Cornhuskers came into Tuesday’s matchup with victories over Iowa and Purdue.

Nebraska continued to chip away at the Terps’ second-half lead. And as the Cornhuskers rallied, Maryland’s energy levels dipped, sending the game to a dramatic conclusion.

“I just can’t even tell you how long a season is and how hard it is in the Big Ten,” Turgeon said. “If you’re going to have a flat game, have it at home against a team that’s won two [league games] and figure out how to win it.”

[Read more: With Anthony Cowan on the sideline, Maryland basketball showed it can hold its own]

When both teams returned to their respective locker rooms after Maryland’s narrow victory, there were two different atmospheres.

Inside the Nebraska locker room, Hoiberg, the first-year Cornhuskers coach, tried to focus on the positives — his young squad consisting of eight transfers and six freshmen took the No. 9 Terps down to the wire.

“Like I told them in the locker room, we just went toe-to-toe with the No. 9 team in the country, who’s got the best record in the best league in the country right now,” Hoiberg said. “A lot of positives tonight for our team.”

Meanwhile, the mood in the nearby Maryland locker room was decidedly bittersweet — delighted to pick up its 20th victory and maintain sole possession of first place in the Big Ten, but annoyed with a largely uninspired display.

“It was a down locker room,” Smith said. “It’s still a win. In the Big Ten, every win is important. But, yeah, we know that we can play better than what we played, and that’s just our main emphasis.” 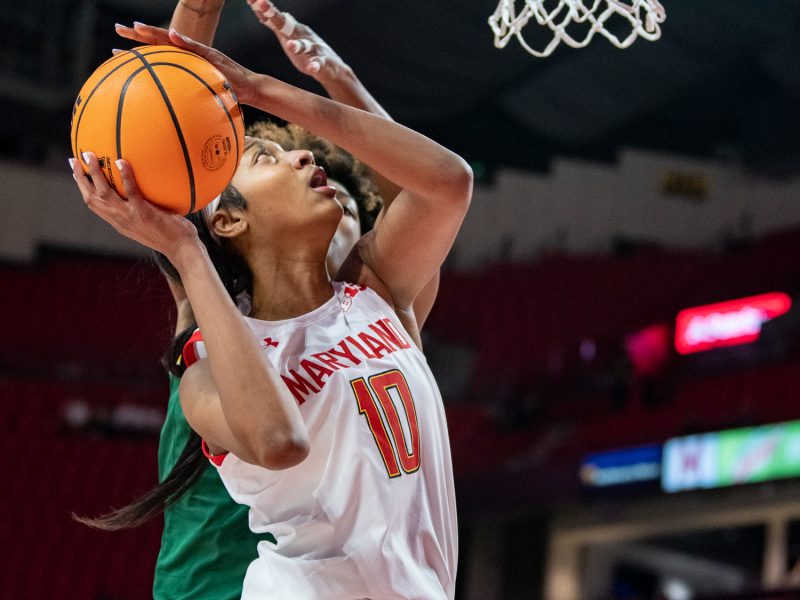