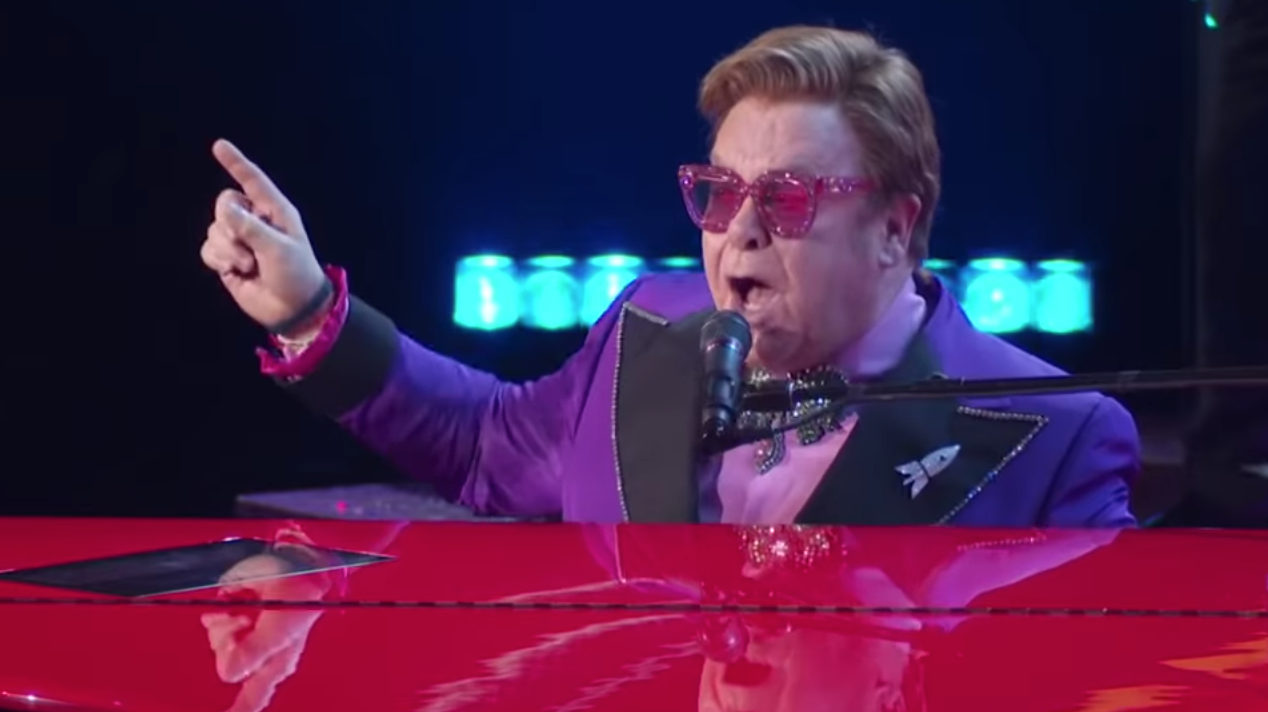 Elton John performing at the 2020 Academy Awards (Photo via YouTube.)

The 92nd Academy Awards were filled with live musical performances from a wide array of stars, such as Janelle Monae, Eminem and Billie Eilish. And each tune nominated for best original song got a chance to perform in the Dolby Theatre — only upping the anticipation to learn who would come out victorious.

But before we came to that fateful moment when the winner was declared, I compiled my rankings of all five performances from best to worst. Here’s my take on who I thought would take home the Oscar.

Though I haven’t seen Harriet, this performance by Cynthia Erivo gave me chills. It was a beautiful setup — Erivo stood alone on stage with a circle of glowing lanterns around her. And when the singing began, her rich, deep tone was a powerful start to the song. Interwoven into the melody was the sharp sound of metal hitting metal, pulling me into the music as it painted a picture of slavery and the pursuit of freedom described in the lyrics.

The stage then lit up in tune with the chorus and a choir appears in neutral-toned outfits. They took steps around the stage, bouncing ever so slightly to emphasize the lyrics they were singing. The addition of other voices somehow made Erivo’s voice stand out even more. Everything melded together perfectly to create a feeling of eruption, as if something was about to burst, right there on stage. Out of all five songs and performances, I truly think this one was the best and most meaningful.

When this performance started, with the “oo’s,” I couldn’t believe what I was hearing. It sounded ridiculous. But then Idina Menzel came out on stage and it changed the entire vibe. However, the song in and of itself wasn’t the best thing I’ve ever heard. When you have a hit as world-changing as “Let It Go,” it’s almost impossible to top that.

However, what made this performance stand out was the addition of all the women who sang in other languages. Women joined together taking turns singing in Thai, German, Danish, Spanish, Japanese, Norwegian, Castilian, Russian and Polish. It was very reminiscent of the 15th anniversary Wicked television special where each pair of Elphabas and Glindas came out and sang part of “For Good.”

When this performance began, my first thought was “Oh, this is actually Elton John.” I’m not sure if it was just me, but for some reason I thought Taron Egerton would sing at the Oscars. Regardless, I didn’t think this was Oscar-winning, compared to “Stand Up.”

The best part of the performance, icon Elton John aside, was the stage decor. It was set up somewhat as an ode to John, with a very psychedelic/disco feel. The main attraction was these huge, pink, star-shaped sunglasses sitting center stage, with John playing the piano in front of them.

Chrissy Metz walked onto the stage in a beautiful, dark-colored gown. I had no idea she could sing, so when she hit the first major note of the ballad — written by Dianne Warren for Breakthrough — I was astonished.

Once the chorus started, the lights came up from behind and illuminated a line of performers, singing with passion. And I love a good choir as much as the next person — it’s always a power move, as heard in “Stand Up” — but in this case, it somewhat overpowered her. At certain points, I couldn’t hear her over their voices, when all I wanted was to get transported by her voice. The best part of this performance was that it ended right as it was starting to get boring.

[Read more: Review: ‘Acid for the Children’ gives a vulnerable glimpse at a rockstar’s upbringing]

5. “I Can’t Let You Throw Yourself Away”

Written and performed by the all-star Randy Newman for Toy Story 4, this song shockingly lacked any performance value at all. Newman sat at the piano and sang his heart out with his classically raspy sound, but that’s really all this amounted to. Newman couldn’t work sitting alone at a piano the way Elton John could.

Even the stage design was poor. There were 3D cloud puffs placed around the stage and the backdrop was Toy-Story sky blue with that same shaped cloud, in a repeating pattern, like a 2006 computer screensaver.

When Elton John won the Oscar, I was a little surprised. The actual performance was fine — he sang one of his hits and did a great job doing it. The song brought viewers back to a different time, when John was new on the scene, while simultaneously lacking the innovation that it once had. In an award cycle where biopics were the hottest commodity in film, it felt overbearing that this won best original song.

For me, “Stand Up” was the clear winner. You could hear the passion in Erivo’s voice from the moment she began. This was something she put her entire heart and soul into, and it showed.