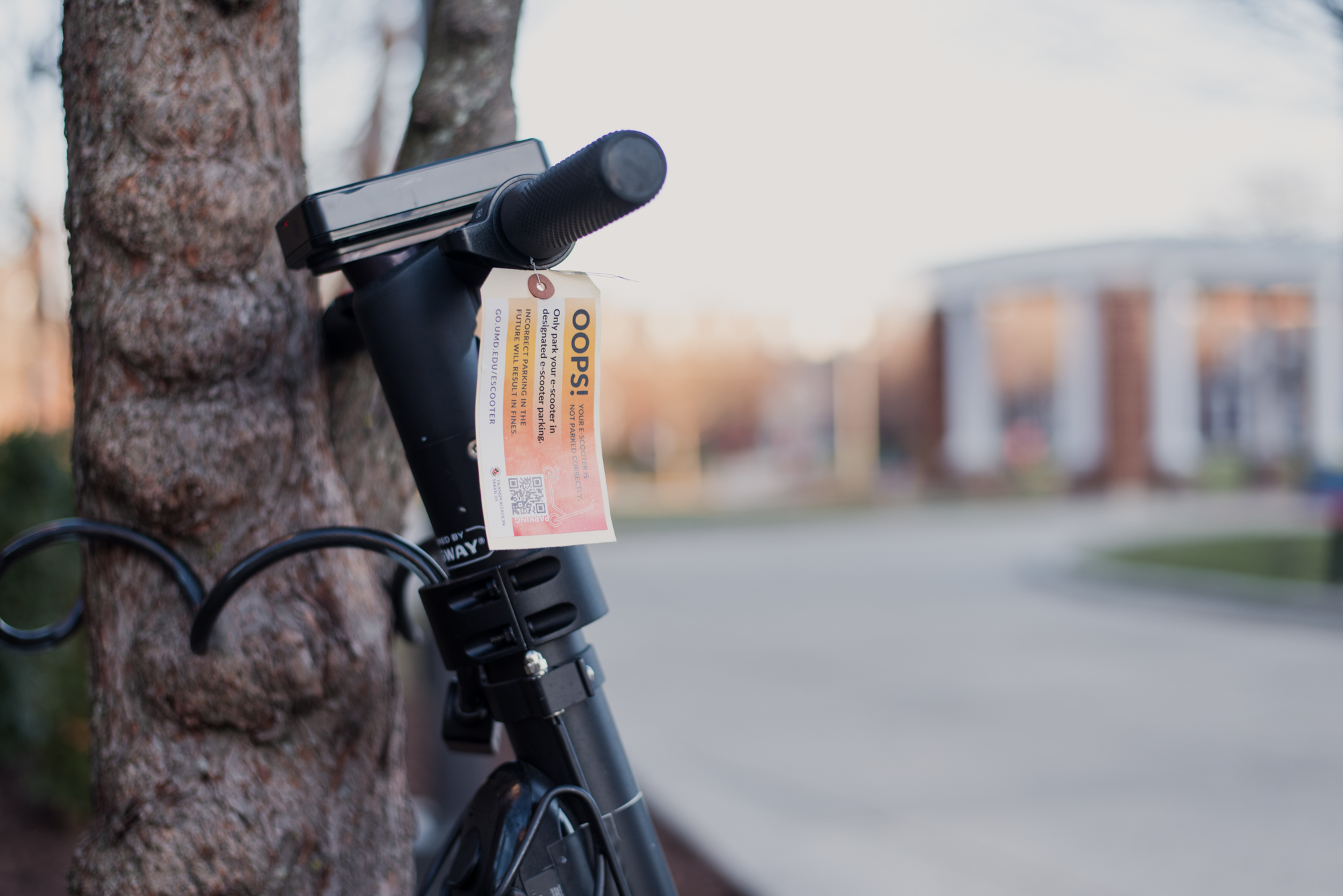 A warning tag was attached to an incorrectly parked scooter on Washington Quad by University of Maryland Department of Transportation. (Gabby Baniqued/The Diamondback)

The 27 e-scooter parking sites on campus — which the university created after the Department of Transportation Services rolled out new safety regulations — do not feature racks or poles students can use to physically lock their scooters in place. This has raised criticism that the new rules are incompatible with scooter brands that don’t lock remotely or via an app, such as Gotrax or Ninebot.

Last semester, students often stored their scooters inside their dorms or in bike rooms inside of their residence halls. While the community living standards outlined in the Department of Resident Life’s Community Living Handbook had previously banned this practice, the policy wasn’t actively enforced until this semester.

However, before this semester, students haven’t been formally penalized when scooters were found in the dorm. Over the break, RAs began documenting any instances where scooters were found, Kiras said. Now, under the new regulations, scooters parked outside of designated parking locations are subject to impoundment, relocation or fines.

The university also began enforcing traffic violations on scooters riding in sidewalks on Feb. 3, according to a campuswide email from DOTS. Now, they “must be operated on the road and follow all traffic laws,” the email read.

“The foundation of our program and the values we hold dear is safety and we are committed to providing a safe environment,” Kiras said, adding that banning scooters from residence halls falls in line with recommendations from the Fire Marshall’s office.

Parhum Ghassemi, a sophomore environmental science and policy major at this university, expressed his concerns on the updated scooter policy in a letter to university President Wallace Loh, writing that prohibiting scooters in dorms would make it difficult for students to charge and store them safely.

“The new scooter policies are not the right way to deal with scooters,” wrote Ghassemi, who owns a Gotrax scooter. “I understand how important safety is, but some of these new policies actually make scooter riding less safe.”

Even though Morgan Craver rents a scooter from Bird — a company that allows users to lock their devices remotely — she expressed similar concerns as Ghassemi. Craver, a junior astronomy major, explained that the Bird app recommends that users lock their scooters.