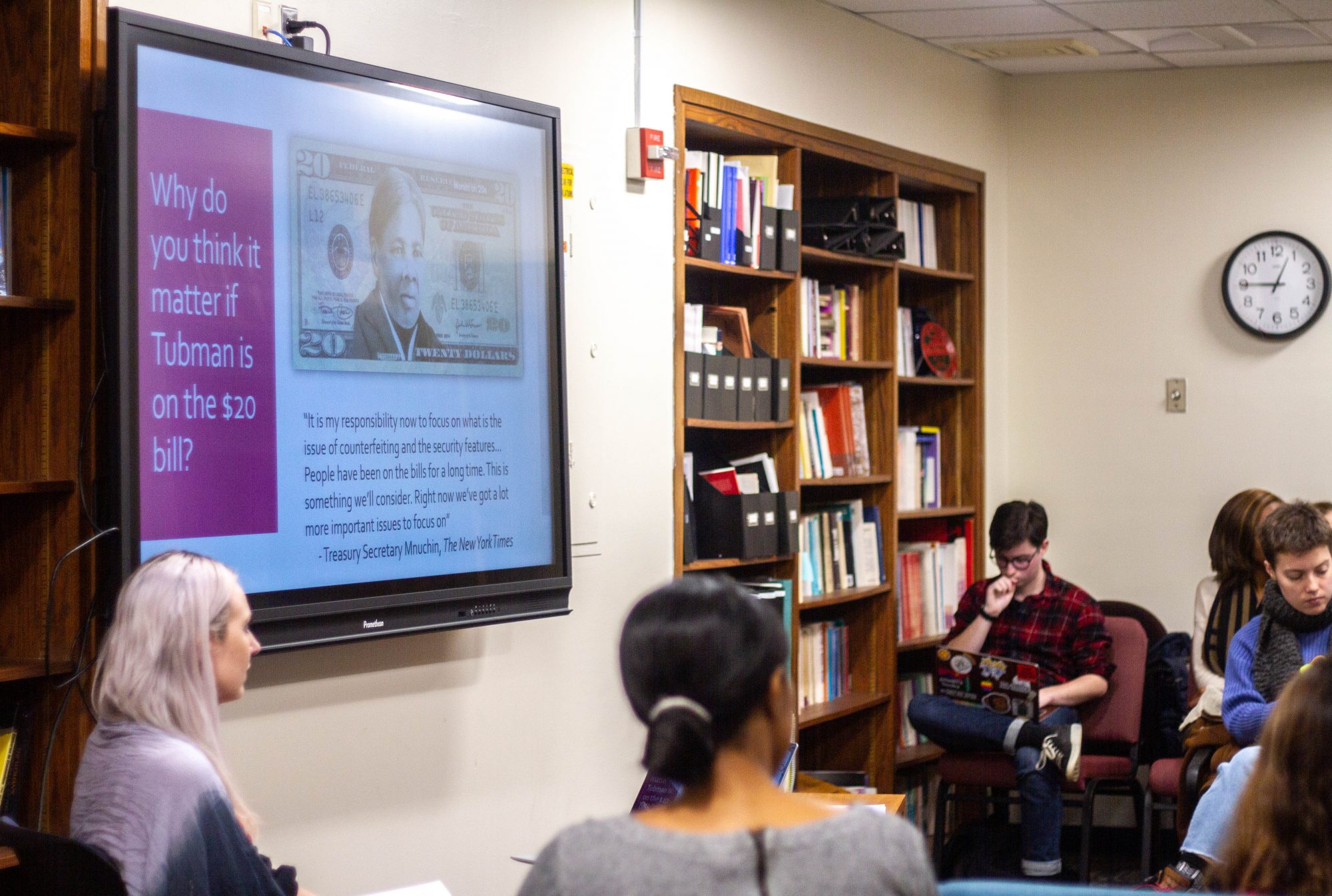 Students engage in a discussion regarding whether Harriet Tubman should be on the $20 bill instead of Andrew Jackson. (Julia Nikhinson/The Diamondback)

By Percy Langston
For The Diamondback

The life and legacy of Harriet Tubman was the focus of a monthly information session the University of Maryland’s women’s studies department hosted Wednesday in celebration of Black History Month.

In this month’s session of Social Justice Hangouts, students were encouraged to consider how Tubman’s legacy can inspire work toward equity and racial justice in today’s society.

“Justice acknowledges that there is inequality,” junior computer science major Yashashri Pendse said. “You have to play off of that inequality in order to finally get to a place in the future where people do feel equal through affirmative action.”

Attendees expressed their admiration of Tubman, particularly when learning about her work rescuing enslaved people from Maryland’s Eastern Shore, as well as her service for the Union during the Civil War.

“There is nothing more fearless than embracing the life and advocacy of a fearless black woman,” said Jessica Lee Mathiason, a faculty member in the university’s women’s studies department, in a statement.

The discussion turned to the possibility of putting Harriet Tubman’s image on a $20 bill, an Obama-era proposal that’s seen delays. Many voiced support for the initiative, criticizing President Donald Trump’s 2019 assertion that removing Andrew Jackson from the bill represented “pure political correctness.”

Other participants considered putting Tubman on currency a “symbolic” act of social justice, rather than one to create meaningful change.

As the discussion broadened to contemporary issues of injustice, many students shared personal experiences. Some spoke about gentrification and economic inequality, while others raised issues of representation in areas such as education.

Amy Rivera, a freshman criminology and criminal justice and government and politics major, described the experience of having her first Latina professor as one that was pivotal when choosing her major. Rivera had never seen a Latina working professionally in her chosen field before.

“That was really important,” she said. “It’s not that you don’t believe you can. It’s just hard to imagine yourself there.”

The question of Tubman’s legacy is strongly felt within this university’s women’s studies department, which proposed changing its name to the Harriet Tubman Department of Women, Gender and Sexuality studies in 2019.

Zambrana said professor Elsa Barkley-Brown created the hangouts. Its purpose is twofold: to educate undergraduates on issues of inequality, and to provide a space for underserved students to discuss and make sense of the world around them.

“Listening is a big part of the work,” Pendse added. “There is a community for every single one of us to listen to.”