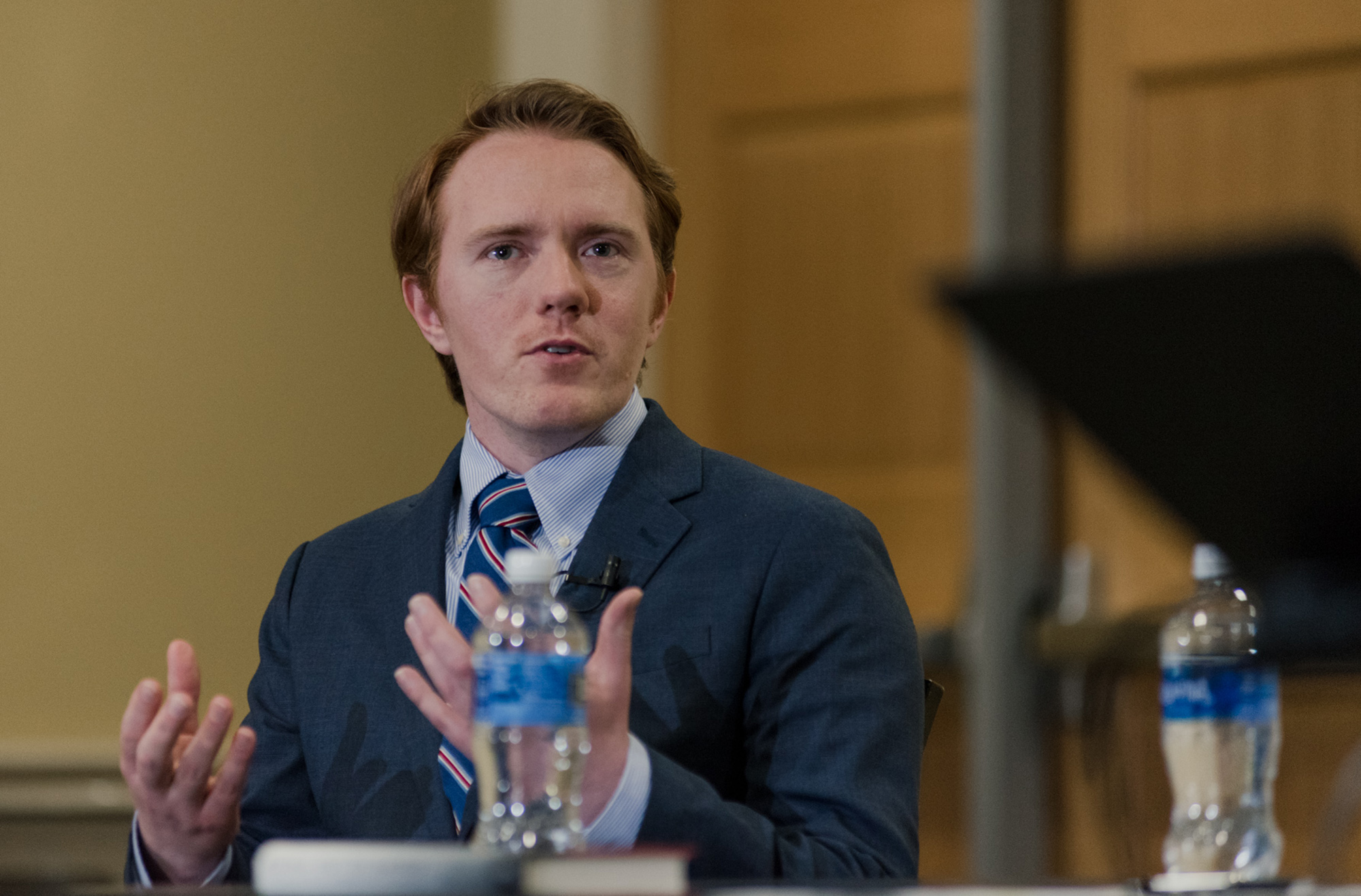 Derek Black discusses his condemnation of white nationalist ideology in an event hosted by the Bahai Chair, the Critical Race Initiative and the College of Behavioral and Social Sciences at the Stamp Student Union on Feb. 4, 2020. (Gabby Baniqued/The Diamondback)

Derek Black enrolled at the New College of Florida, a public liberal arts college, for the same reason many other students do: to get a good education with low in-state tuition.

On the surface, he seemed like any other 21-year-old on the campus. He was interested in history, lived in dorms and quickly formed friendships with his peers.

But unlike most students on his campus, Black was a white nationalist, hailing from the leading family in the movement.

“When I showed up at college, it was not new to me that people were opposed to racism and white supremacy,” Black said. “But I had never heard it before from anyone who I cared about.”

“It’s not like my family didn’t watch the same TV shows and the same movies as everyone else,” Black said. “Most people who are involved in nationalism … they’ve listened to the same music, they do the same thing. They just have a different filter for how they interpret everything that happens to the world.”

More than 150 people attended the event in the Stamp Student Union’s Grand Ballroom Lounge, sponsored by the Critical Race Initiative and the Baha’i Chair for World Peace, two programs housed by the behavioral and social sciences college.

“Today’s conversation really helped us to get a glimpse into that world and to understand it better from a more factual basis rather than just false assumptions,” said Hoda Mahmoudi, who holds the Baha’i Chair for World Peace.

Black’s godfather, David Duke, was once married to his mother and is his half-sister’s father. Black’s father founded Stormfront — the first online white power community — and at a young age, Black gave media interviews, spoke publicly and ran a radio show supporting his family’s ideology.

“It’s the worldview that my family had spent decades building by the time that I was born in 1989,” Black said. “Like when I was four years old, there were leaders of the white nationalist movement coming over to the house for Christmas parties to discuss conferences.”

After befriending students of various religious and ethnic backgrounds, and listening to different points of view, Black said he realized his family’s beliefs were not only inaccurate, but dangerous. While he never advocated violence, he realized how his former ideology validates violence in many extremists’ minds. He cites the major change in community as a large reason for his dramatic worldview shift.

“To have individual change in mind, facts will not do, but you cannot give them a book and change their mind,” Black said. “You must have them connected to you through some kind of community.”

Rebecca Shankman, a junior criminology and criminal justice and sociology major, moderated the event and had the idea of inviting Black after reading Rising Out of Hatred: The Awakening of a Former White Nationalist, a 2018 book by Washington Post reporter Eli Saslow that chronicles Black’s experience.

Shankman said she reached out to one of her professors, Rashawn Ray, to organize the event.

“I think it’s a really important conversation to have as college students, as people prepping for the 2020 election, and as someone living in America today,” Shankman said.

White nationalism, which Black publicly condemned in a 2013 letter to the Southern Poverty Law Center, has a goal of incrementally making people identify with more explicitly racist views, he said. While they may have to deal with condemnation from mainstream sources, many can find resonance somewhere, he said.

During his discussion with Shankman, Black explained how conservative politicians today use white nationalist talking points, such as linking gun violence to certain ethnic groups.

“Their goal is to produce material, to constantly refine their message, to figure out ways to reach people who are more subtly in agreement with what they’re saying, to find ways to say — don’t you think gun violence in cities is because of the people, and who do you think lives in those cities?” Black said.

After leaving the movement, Black tried to remain silent, believing he did too much harm by speaking publicly. But he then realized he must actively work to fight oppression through dialogue.

“Things don’t change unless we all push back on them,” Black said.