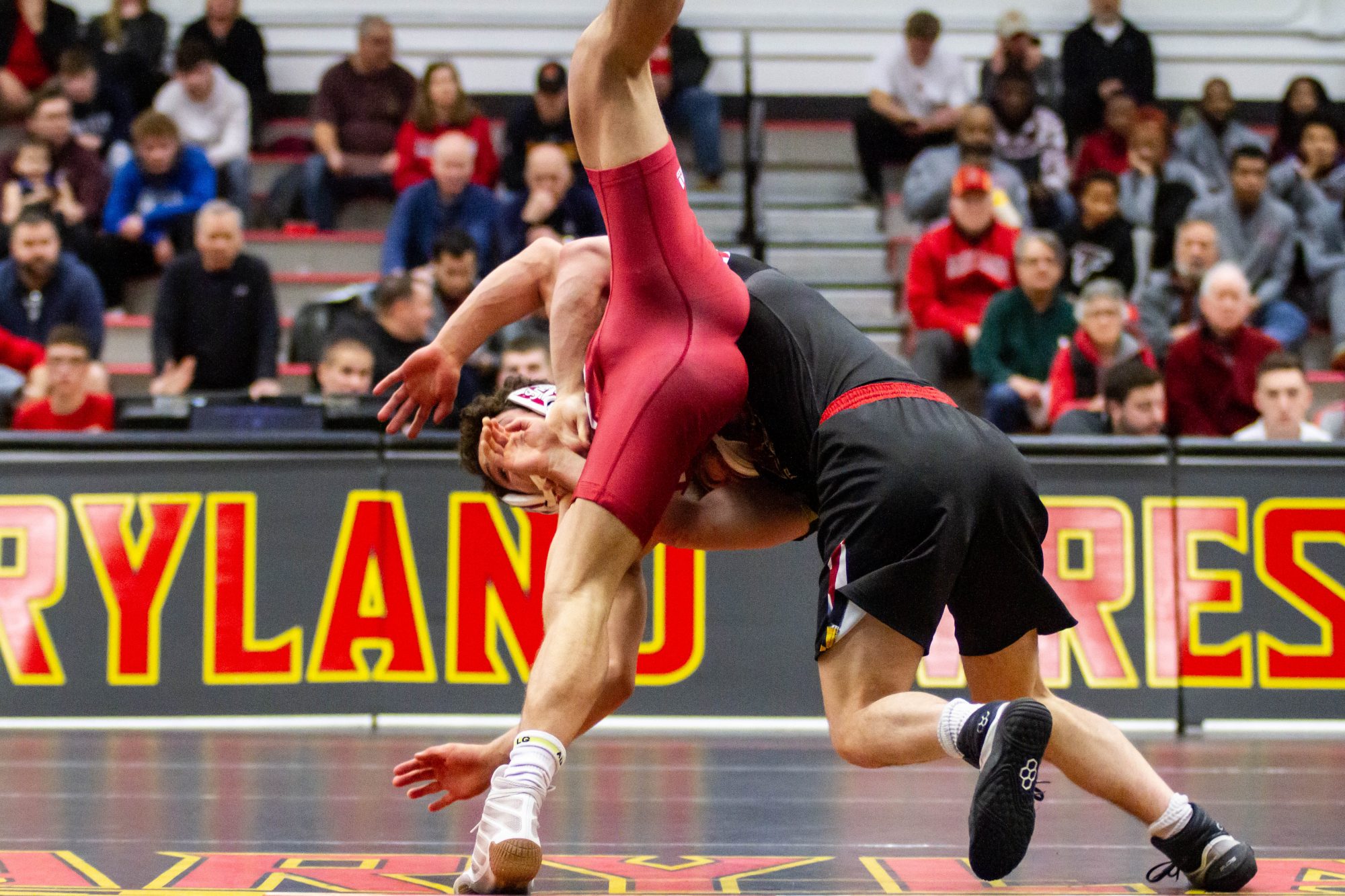 Starting off a dual with a win has been a rarity for Maryland wrestling this season, but against No. 2 Penn State, the Terps bucked that trend.

Brandon Cray has been the Terps’ opener at 125 all season, and he faced Brandon Meredith to start Sunday’s match. The redshirt senior notched a takedown and landed an impressive reversal in the second period with two back points to take a 7-5 lead.

That four-point swing was enough to secure an eventual 8-7 decision — his first Big Ten dual win of the season — to give Maryland a 3-0 lead, but it was short-lived as the Nittany Lions dominated the rest of the dual, winning 40-3.

Penn State featured five ranked wrestlers, including four ranked in the top three and two at the top of their respective weight classes.

Maryland’s best shot at taking any points in the dual was in the lightweights, where three Nittany Lions were unranked. The Terps got the victory at 125 and looked to secure points at 149 and 157, too.

For the second time this weekend, Michael Doetsch wasn’t featured in the starting lineup as Ryan Garlitz took his place. Garlitz had one of the closer bout losses in the dual, losing a 9-0 major decision to Jarod Verkleeren.

Following him was Jahi Jones, who faced Bo Pipher, a junior who entered Sunday with a below-.500 record. With the home crowd at State College behind him, though, Pipher shut out Jones with an escape in the second period and a takedown, winning a 3-0 decision.

With Penn State taking a 17-3 lead into intermission and some of its heaviest hitters coming up, the Terps’ chances to cut into the lead grew slim.

No. 1 Vincenzo Joseph and No. 1 Mark Hall were up next for the Nittany Lions, and they made their presence known as each pinned their opponent early on in their bouts. Hall beat 174-pounder Philip Spadafora in less than a minute, putting Penn State ahead 29-3.

Maryland had opportunities to secure points at 184 and 197, where the Nittany Lions featured unranked wrestlers, but coach Alex Clemsen’s team failed to capitalize.

The Terps had two close bouts with Kyle Jasenski and Niko Cappello, separated by four points, but in each, Maryland came up just short. Cappello had the closer of the two, down 3-1 with 30 seconds remaining in the third period.

He got an escape to cut the lead to one, needing a takedown to win the bout and give the Terps three more team points before the match finished up.

Cappello took a shot down low, but Austin Hoopes absorbed the blow and fought it off at neutral, keeping the bout 3-2 as time expired.

It was an improvement from two years previous where the Terps lost 47-3 on the main floor at Xfinity Center, but the result remained the same, yet another defeat in a season filled with hardship.