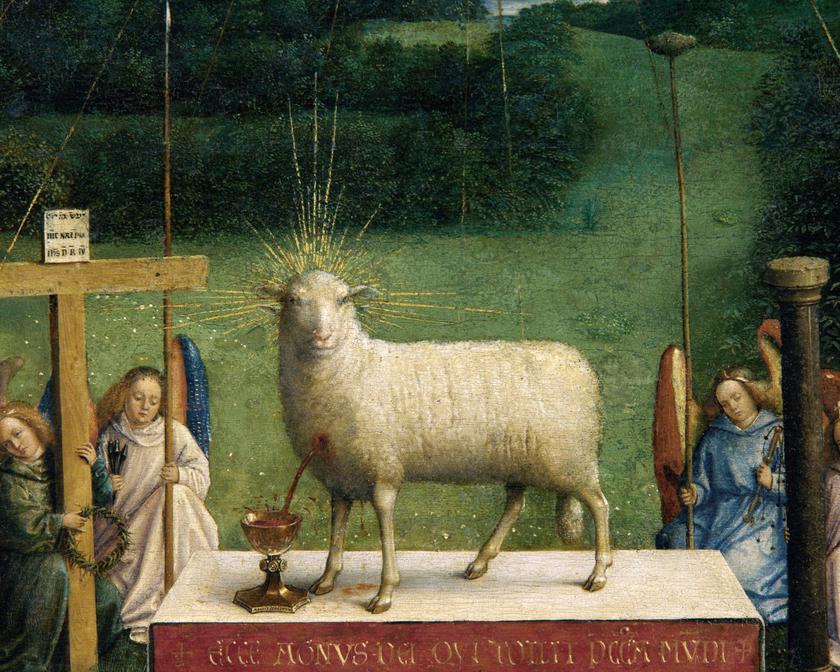 The Lamb of God in the Ghent Altarpiece prior to restoration. (Photo courtesy of Wikimedia Commons)

The central panel of the Ghent Altarpiece — a famous 15th century piece of Christian iconography — recently underwent restoration, removing layers of overpaint by a different artist than the original. And it churned up something sinister. The Lamb of God’s face at the center of the painting came off to reveal intense yellow eyes staring at the viewer and an overall more visceral, cartoonish visage. Rather than maintaining a depiction of gentleness and soft features, this painting now contains an expression of the uncanny and the “nightmarish.”

The viral shock expressed by viewers of the painting significantly blurred the boundary between high and low art. That’s what’s important about debates around art restoration: Whatever the outcome of the restoration effort, the authority of authenticity is challenged.

Calling something high art makes an object irreproachable, thus removing any obligation of it to be accessible. That’s the kind of art that has no use because we are only told what it should be. The original artist of the Ghent altarpiece saw Jesus as an intense and stern figure; a century later came another artist’s insistence that the Lamb of God is demure and knowing. Religion undergoes constant reinterpretation to be resonant and acceptable to different people as well as shed characteristics maladaptive to modern life, and it’s not sacrilegious for canonical art to do the same.

Moreover, the authenticity of art shouldn’t matter because we have to move beyond original intents to understand old works anyway. The act of critiquing and explaining art — whether by writing essays or Facebook posts — is already removing the art from its original context even if it codifies a high art meaning. Restoration work tries to reveal the original painting by removing wear and tarnished pigments, but hesitancy to paint over an image to restore features or simply the limits of the field mean we can never recapture a painting as it was fresh. Artifacts of age and history are inextricably part of experiencing art.

And though the Lamb of God is now ugly, the significance of the overpaint is not removed from history or scholarly study. It cannot be cheapened just because it was discovered to be inauthentic. There is no inherent value to authenticity because it’s not tied to meaning.

One of the most famous art restoration efforts of the modern era was in 2012, when Cecilia Giménez painted over Ecce Homo and turned a fresco of Jesus into a vaguely simian effigy. What was so beautiful about her “ruining” the painting is that it elevated an insignificant work into a lucrative tourist attraction; the original is now discussed and defended more than it ever was when intact. Though the object is destroyed, its cultural value is retrospectively elevated. This is perhaps the sincerest way to honor an artist; they are regarded not for the monetary value of possessing their art, but instead for having been unique, precious because of personal sentiments.

Physical reinterpretation of art is the most aggressive way of engaging with it, but it sends a strong message. There is no object so important that it is beyond human judgment. Perhaps it is, above all, a virtuous reminder that religion is not about the worship of things but abstractions, that we should champion the amorphous over the fixed, and that just because something is old doesn’t mean it’s not too ugly to tweet about.