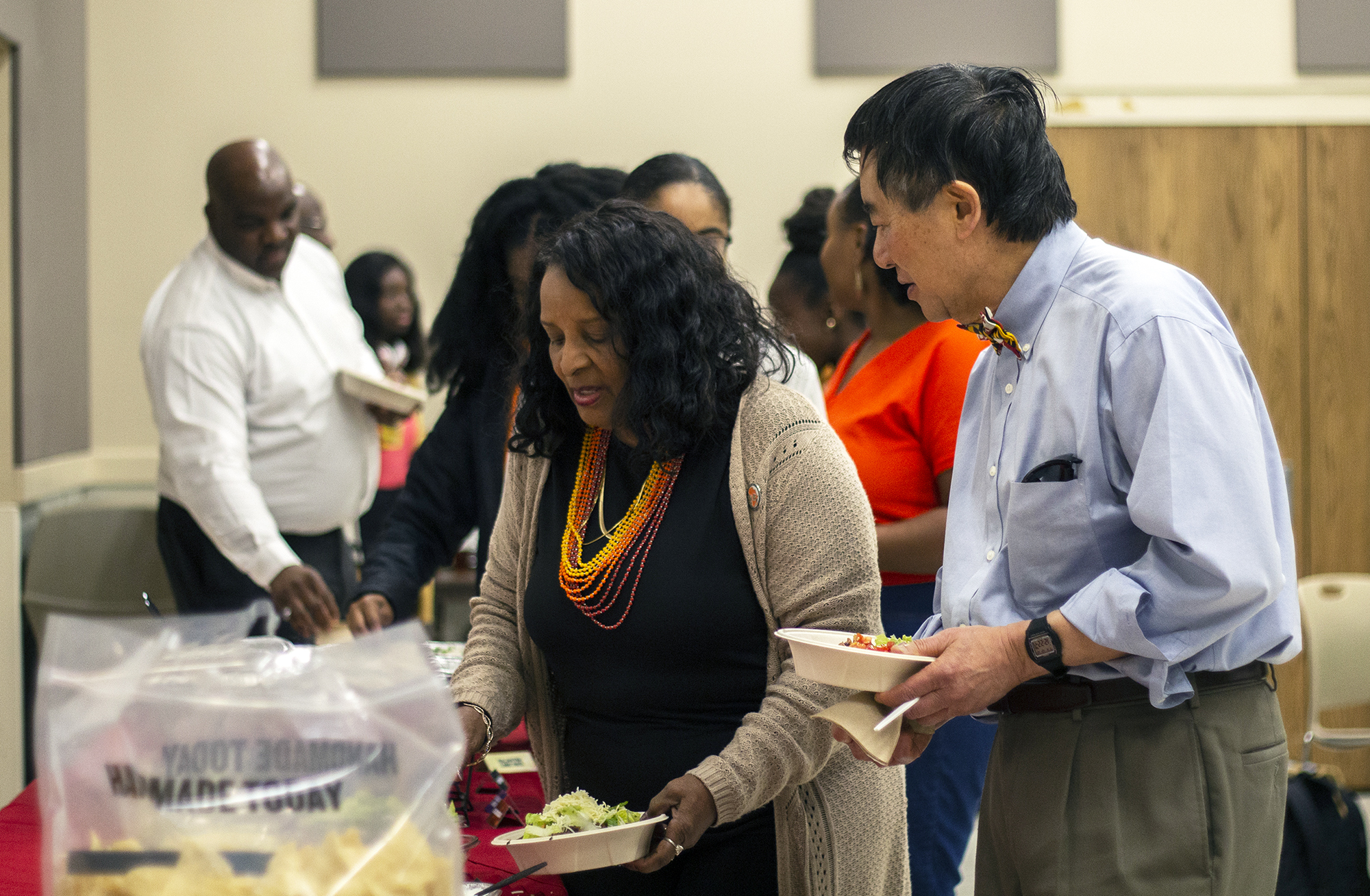 A kaleidoscope of orange brushed through the Nyumburu Cultural Center’s multipurpose room Thursday afternoon with flashes of neon glowing from a hat here, a hoodie there. Orange beamed from sweatshirts, blouses, a tie, a necklace.

The event celebrated what would have been 2nd Lt. Richard Collins’ 26th birthday, and organizers, in a show of solidarity, asked attendees to dress in orange — Collins’ favorite color, said Elonna Jones, president of this university’s NAACP chapter.

As the trial for the former University of Maryland student charged in Collins’ killing moves forward, members of the university community came together not only to memorialize his life, but to celebrate it.

“We thought it was very important, especially in light of the trial that just started, to be able for us to come together as a campus community — to not forget what happened, but also to be able to move forward and support one another,” said Jones, who had a pale orange crystal dangling from her neck, meant to channel positivity.

In May 2017, Collins was fatally stabbed near the Montgomery Hall campus bus stop. Sean Urbanski, a former student at this university, is facing hate crime and murder charges in his death.

Urbanski was originally scheduled to stand trial in January 2018, but a flurry of motions from prosecutors and defense attorneys lead his trial to be pushed back four times.

The criminal justice system does take time, Black Student Union President Misha Bucknor noted. She stressed the importance of keeping the incident on the “forefront of people’s minds” and of being there for the Collins family.

“It’s a hard situation, and I can only imagine because it’s hard on students,” she said. “We wanted to be able to do something, no matter how small, to show that we care, we feel their pain.”

Bucknor and Jones worked together to organize the event, and the university’s Multicultural Involvement Community Advocacy office offered funding for food. Before the around 30 attendees lined up to pile Qdoba into their bowls, the Nyumburu Center’s director led the room in a blessing.

In the prayer, Ronald Zeigler asked for tranquility on the campus between now and the beginning of the next semester.

At the lunch, university President Wallace Loh greeted the students and passed around his signature golden turtle pins. He said that he had heard of the event around an hour before it started, and decided to stop by to show support for students — adding that it was “so important” that they had organized the gathering to remember and honor Collins.

Loh also reiterated his pledge to the room that Collins’ life would be memorialized on campus.

“I want to promise you that his memory will never be forgotten, that this university will honor him in a permanent way,” Loh said at the event.

Some of the assembled students, though, expressed frustration with what they saw as the university’s reluctance to spread awareness about Collins’ death.

Mark Lockwood came to campus to start his doctorate in American Studies in fall 2017. But he didn’t learn of what had happened at the bus stop — or of the noose that had been found hanging in a fraternity house about a month before Collins was killed — until the following semester. He said he broke down crying when he heard.

“It was just so much going on that I was unaware of prior to coming here,” he said. “You get here and you’re not necessarily departmentally covered from it, but administratively, these are things that aren’t talked about.”

Isha Kamara, African-American studies major, said she was a sophomore when Collins was killed. She emphasized that his death followed a wave of hate bias incidents — and she feels it was preventable.

In December 2016, posters advertising white supremacy were found posted around this university’s campus. And Kamara said remembered protests after the noose was found in Phi Kappa Tau’s kitchen, just a few weeks before Collins was killed. She said students wanted the administration to crack down on the incidents and demonstrate that they would not be tolerated — but were dissatisfied by the university’s response.

“We are thinking of the Collins family as the trial progresses,” a university spokesperson wrote in an email.

Still, Kamara said, it should fall to the university to inform students about Collins’ case.

“So things like this don’t happen again,” Kamara said.

Urbanski’s trial is set to continue on Monday, after being put on hold from Thursday to Friday for Collins’ birthday. The NAACP and the BSU are planning to organize a group to meet students from Bowie State University at the Prince George’s County Circuit Court in a show of solidarity and support for Collins’ family.

Sharon Kimemia, a senior criminology and criminal justice major, said she will try to go to the courthouse Monday. When hate exists, she said, it’s important to be united. Kimemia said Collins’ death has not broken the campus community — they are going to keep fighting.