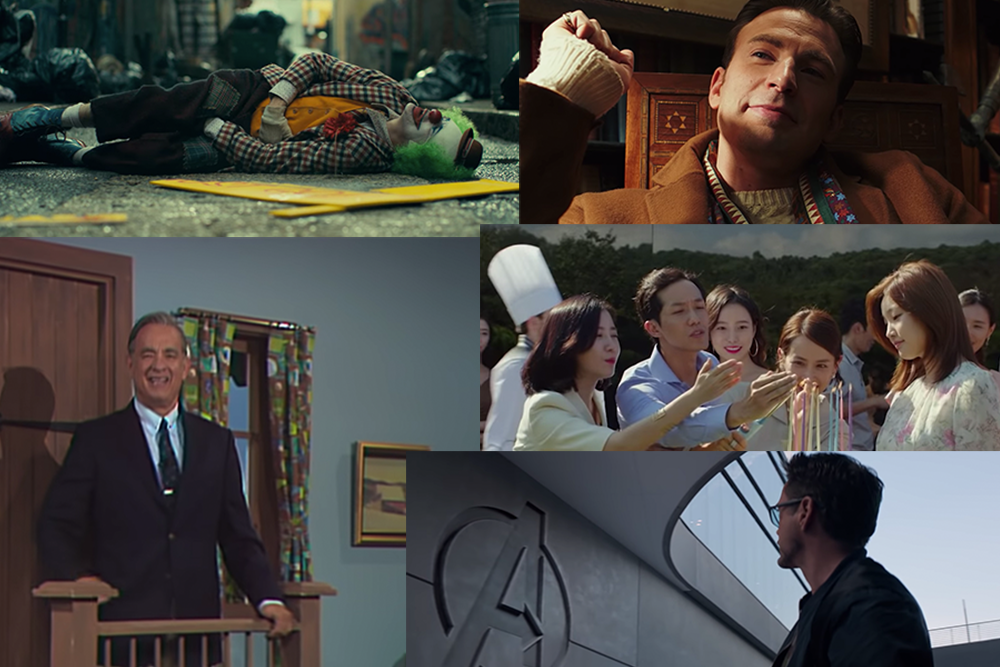 'A Beautiful Day in the Neighborhood,' 'Knives Out' and 'Parasite' are among The Diamondback's best movies of 2019 (Photos via YouTube).

Rian Johnson’s star-studded Knives Out pitches itself as a modern take on the classic whodunit. It doesn’t disappoint. It’s like an Agatha Christie novel, if Poirot had Daniel Craig’s piercing blue eyes and questionable southern accent and Hastings was a young Latinx nurse (Ana de Armas) with a smartphone and a Pinocchio-esque reaction to lying.

The movie follows the melodramatic Thrombeys, a dysfunctional family made rich by the writing career of its patriarch, Harlan Thrombey (Christopher Plummer), who’s found dead within the film’s first few scenes. Police quickly rule his demise a suicide — but is it?

Every Thrombey is a suspect, and nobody is ruled out until the final act. The movie presents an entrancing murder-mystery puzzle, while using its main characters to issue some not-so-subtle criticism of racism and xenophobia. A great watch for cinephiles and casual viewers alike, Knives Out really hit its mark.

Whether you’re an avid fan or absolutely despise the franchise, you have to admit that Avengers: Endgame delivered on what it promised audiences. The cast itself was enough to drop your jaw, let alone the fact that Marvel finally wasn’t too wimpy to pull the plug on some big names.

The franchise’s female faces stopped feeling like token sidekicks, and the writers weren’t scared to play around with new tropes, such as adding a couple of pounds to Thor. The explosive combination of loyalty and sacrifice left viewers feeling a sort of nostalgic emptiness, waiting to see where the universe would pick up from there.

Joker starring Joaquin Phoenix was one of 2019’s greatest cinematic works. Phoenix dove into this role headfirst, fully immersing himself in a new persona. The storyline draws from current events, with selfish politicians and a societal stigma around mental illness.

Director and producer Todd Phillips creates a world filled with doom. Though hyperbolic, Joker sheds light on the grim alienation of today’s society. Phillips gives us an origin story for real-life villains, showing they aren’t created in a vacuum but are born out of circumstance.

A Beautiful Day in the Neighborhood

I didn’t walk into a movie about Mr. Rogers expecting it to be one of the best movies of the year. I thought it was going to be a cute, lighthearted and biographical account of one of my childhood heroes. Instead, A Beautiful Day in the Neighborhood is a moving story about how difficult it can be to accept love from others and take care of your own soul. I started crying about 15 minutes in and didn’t stop until the credits.

Beautiful Day taught me that Mr. Rogers’ messages for children still apply — if not more so — in adulthood. This film shows the protagonist, a journalist writing a magazine profile on Mr. Rogers, learning that he needs to take care of his inner child in order to fully love his family. And in turn, I learned that I can live like Mr. Rogers by practicing happiness every day until it becomes part of my character.

In the golden age of a Marvel- and Disney-dominated world, it feels like little room exists for stories that are masterful in subtlety and restraint. Parasite, directed by Bong Joon-ho, is a dramatic dark comedy that paints the complex and painful picture of poverty, class and the lengths people will go to escape destitution.

In a masterful social commentary, Joon-ho created a film that presents, from its core to its outer shell, the rottenness of modern capitalism and employs beautiful cinematography, a stellar cast and writing that is so rich, you will need time to digest it.