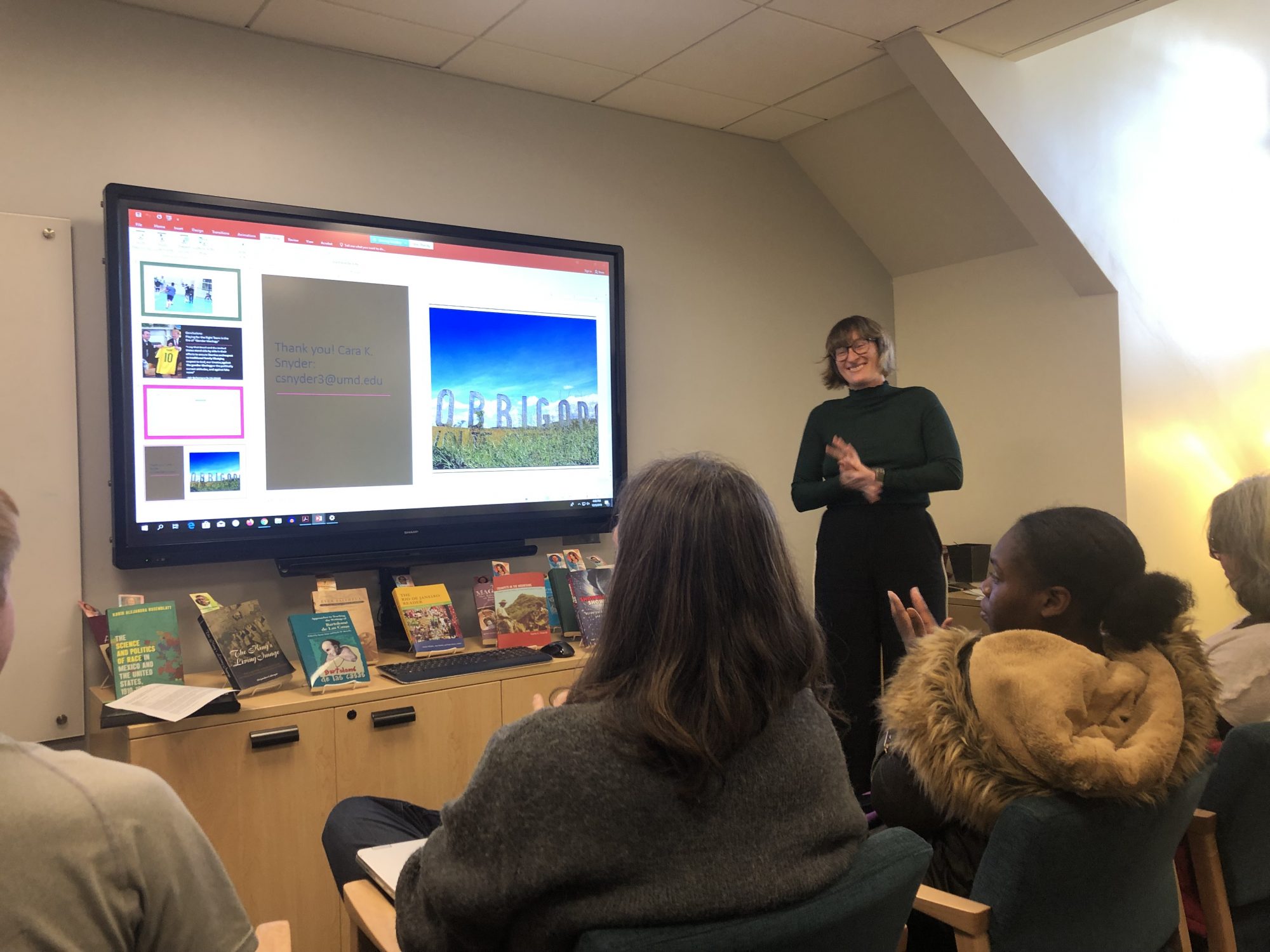 Cara Snyder thanks the students and faculty who attended her presentation in H.J. Patterson Hall on Dec. 6, 2019. (Jonathan Tercasio/For The Diamondback)

By Jonathan Tercasio
For The Diamondback

At a talk at the University of Maryland on Thursday, a postdoctoral associate highlighted how women and LGBT athletes playing soccer in Brazil — a country where the sport is tied to male identity — is inherently political.

Cara Snyder, who works in the Latin American Studies Center at this university, examined the struggle of Brazilian women and transgender soccer teams to become more widely recognized, looking at various case studies such as the first LGBT and transgender teams formed in Brazil. Nationhood and identity are bound up in soccer, or “futebol,” in Brazil — a country she said is “known for violent disciplining of gender nonconformity.”

“Soccer was a way to establish masculine identity,” Snyder said, after citing the ban on women’s soccer in Brazil, which lasted about 40 years.

During the ban, she said, many people used pseudoscience to contend soccer endangered the reproductive capabilities of women.

Luisa Torres, a University of Delaware doctoral student who attended, is working on her own dissertation about women using soccer as a political space for protests.

In 2017, Snyder studied as a Fulbright scholar in Brazil, where she began to research the emergence of transgender soccer teams. There, she met Raphael Martins — the founder and captain of Meninos Bons de Bola, Brazil’s first transgender men’s soccer team.

Martins was assaulted because of his transgender status, Snyder said, highlighting the daily violence nonconforming people face. In a one-year period, at least 167 transgender people were killed in Brazil, according to data from a project from Transgender Europe, a network of organizations to support people of various gender identities, making it the most dangerous country to be transgender.

Menino Bons de Bola serves as an important case study because it calls attention to the techniques used by marginalized sports teams to gain visibility, Snyder said. And as a result, their self-formation and media portrayal became intertwined.

“I wasn’t aware of a trans population in sports,” freshman American studies major Josh Schlachter said. “It was interesting to see that kind of representation.”

Throughout her research, Snyder said she discovered the team’s presence on the internet revealed the possibilities and perils of online visibility.

At first, the team sought lots of media coverage — but now they are more selective, Snyder said, adding that they’ve developed much more cultivated, personal networks through platforms like WhatsApp to protect themselves.

“Once you release your stories in these certain venues, you no longer have control over them,” Snyder said. “Transphobic comments are unfortunately a part of the MBB’s online experience.”

Forming a team generates a particular kind of coherence, and gender coherence is key to transgender politics, Snyder said.