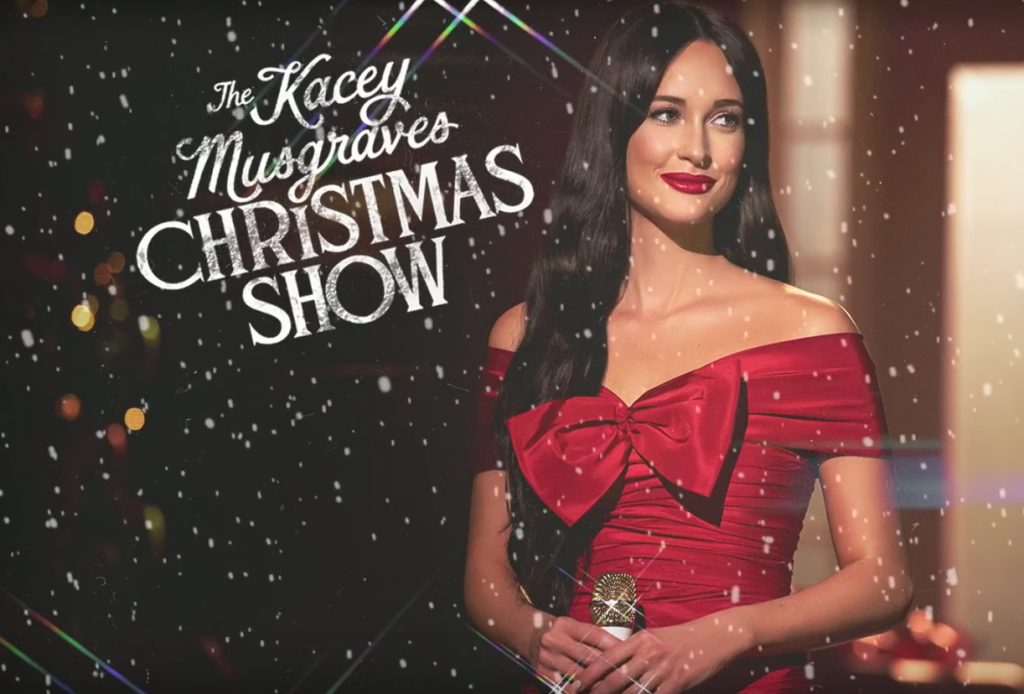 'The Kacey Musgraves Christmas Show' is available on Amazon Prime (Photo via YouTube.)

Call me Scrooge, but Christmas just hasn’t hit the same over the past few years.

Yes, it’s a great excuse to relax from the tribulations of the 9-to-5 world, spend time with your loved ones and maybe get some cool presents — but it just doesn’t feel as special as it did when we were kids.

Well, guess what. My country queen, Kacey Musgraves, has solved that problem entirely, and I’m about ready to deck some halls, jingle some bells and buy a reindeer costume to wear for the rest of December.

With her covers of Christmas classics as well as her original holiday songs , Kacey was also able to sprinkle some jokes in here and there, ticking all the boxes.

Here’s a list of the five biggest reasons you should make sure to watch this special (at least once):

From choking on fake snow with James Corden to re-enacting the iconic note card scene from Love Actually with Kendall Jenner, Kacey had an A-list line-up of stars to prance around with for the 45-minute special.

Her duet with Lana Del Rey, “I’ll Be Home For Christmas,” literally gave me chills — and made me wonder why Lana doesn’t have a Christmas album of her own.

But the highlight was when Kacey’s own nana made an appearance to remind us all what Christmas is really about.

While Kacey nailed the classic hits such as “Have Yourself a Merry Little Christmas” and “Let it Snow” with her typical twangy vibrato, her original Christmas songs were what truly stood out.

Her Troye Sivan duet “Glittery” is peak Christmas vibes. Her glittery pink get-up and his glittery green suit looked ethereal as white lights spun around the room, a perfect complement to their smooth vocals on the heartfelt ballad.

She also catered to the holiday skeptics of the world with “Christmas Makes Me Cry.” It was a fresh perspective, considering the saturation of overly-joyous, uber-festive songs that you normally hear this time of year.

Speaking of overly-joyous and uber-festive, she closed out the show with “Ribbons and Bows,” which just made you want to get up and dance with her. This one might even be as iconic as Mariah Carey’s “All I Want For Christmas Is You.” There, I said it! Sue me.

3. Dan Levy as the narrator

The Schitt’s Creek star is the perfect antithesis to Kacey’s eagerness to ring in the holiday, with his snide, sarcastic comments poking fun at the season.

Used for a laugh or two between numbers in a hilarious elf costume, he refuses to let up on our country star. You get the whole gist of his schtick when he says, “And so even though Kacey had made virtually no progress with her Christmas preparations, she did somehow manage to find time for another song.”

Levy keeps the special from giving off the appearance of taking itself too seriously.

I’d be lying if I said I didn’t audibly gasp at multiple of Kacey’s iconic fits Kacey. The half-lace, half-fringe jumpsuit she sported for her duet with Camila Cabello literally took me out and resurrected me.

Thankfully, the jumpsuit shenanigans weren’t over, as she closed the show in a gold, spangly one.

Not to mention, she looked better in an oversized reindeer sweater and red leggings than I will look in any piece of clothing ever in my life. Damn you, Kacey.

Kacey doesn’t have an over-the-top personality, nor is she the world’s best dancer. That makes her so great is just how cheery and genuine she is. Her humor is subtle, but you can’t help but laugh with her, like in her goofy banter with six-bearded-white-men-that-all-look-like-the-same-person band.

When she winks at the camera, or even just points to it, I can’t help but quake just a smidge.

So now, Kacey has not only made me see country music in a new light, but Christmas in a cheerier light as well.

[Read more: Review: BROCKHAMPTON is completely uncategorizable and I love it]