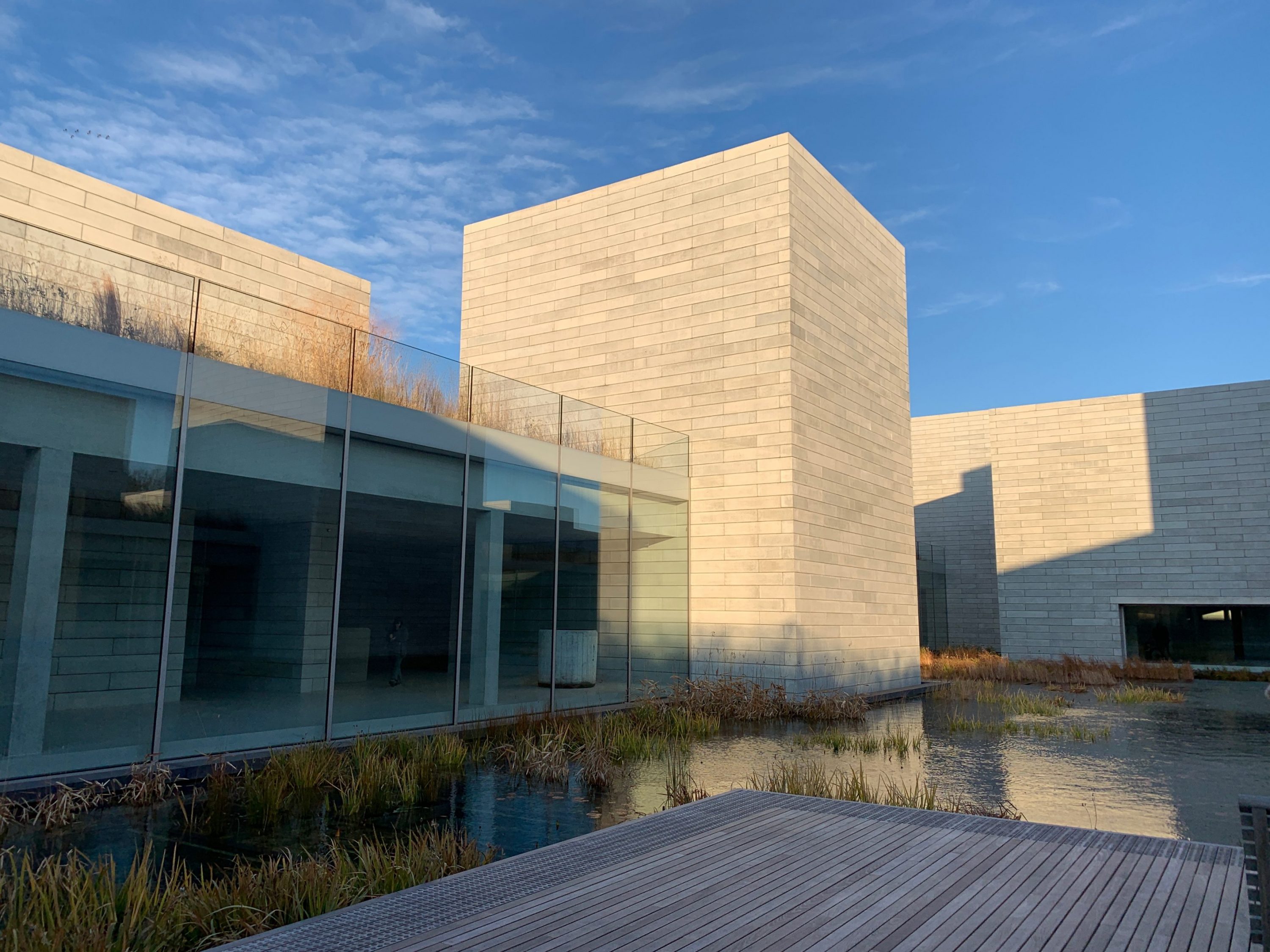 The serene architecture and landscaping at Glenstone offer a quiet place for reflection (Audrey Decker/For The Diamondback).

Art exhibits change year to year, but the art museums I visit in my standard Washington, D.C., loop remain consistent. I would like to think of myself as in the know about the DMV art scene, but I only recently heard about Glenstone — an art museum in the area that is not in the city.

Glenstone was originally established in 2006, and it’s expanded several times since. The largest expansion — in 2018 — included additional galleries and 130 acres of landscape. The private museum is located in a beautiful part of Potomac, Maryland, fairly close to College Park, so I was surprised I hadn’t heard about it until this fall.

When I searched its website, I was informed that Glenstone is viewed “not only as a place, but a state of mind created by the energy of architecture, the power of art, and the restorative qualities of nature.” At first, this statement struck me as a little pompous, and that feeling only grew as I drove into Glenstone. The approach was understated, but it looked like I was entering the private mansion of someone rich and famous. The entrance way was made of stacked stone with white lettering and funneled visitors into a long driveway.

The visitors’ center was a minimalist’s dream: modern, clean surfaces with floor-to-ceiling windows that let in as much natural light as possible.

You begin your journey through Glenstone on a trail, walking from exhibit to exhibit. Even inside the buildings, there was so much room between each work of art. I loved how the visitor had to go to the art, rather than all of the art being in one place like regular museums. It created a sense of discovery; the art wasn’t spoon-fed.

Along the trail, everything was a surprise. The first bend in the path opened up to a huge field, with a giant fuzzy, green dinosaur-looking head by Jeff Koons at the top of the hill. Moments of art and architecture stuck out of a serene landscape

After the enormous head, the trail led to a zig-zag boardwalk path through the forest. The forest had small, rustic cottages along the way. The first cottage opened up to a cracked boulder made out of local clay and human hair to bind the sculpture together. The artist wanted to create something that eventually would fall apart and become part of nature again.

The second cottage was empty, but the ceilings and walls were made from the same cracked clay. As I understand, the cottages were about the natural progression of time. The last cottage had nothing in it, like the second, but the back wall had fewer layers, going deeper and deeper into the earth. It was an interesting exploration of using natural materials within a natural environment, combining landscape and art.

Walking outside on the trail was refreshing, and since there was art to see along the way, it also felt purposeful. The architecture of the “pavilions,” the main location for the indoor art, was breathtaking. Modern and austere concrete structures jutted upwards. The stark geometry of the architecture was juxtaposed against the organic, undulating landscape, each made more beautiful by the other.

Most museums have a certain hush to them, but Glenstone was especially quiet. Since the ticket system only lets a certain number of people in at a time, the spaces were fairly empty and peaceful. Keeping the private museum as lowkey as possible adds to its “hidden gem” quality. Glenstone is completely free and open to the public, but you need to get tickets in advance. February tickets will be released on Dec. 1.

There was an incredible amount of art inside the pavilions, enough to visit Glenstone for a second day. Jackson Pollock, one of my favorite painters, has a painting featured, as well as some other renowned mid-century artists. The gallery spaces were underground and without windows but the connecting passages had floor to ceiling glass overlooking a courtyard pond. This created a tranquil view, once again juxtaposing interior/exterior, nature/man-made, solid/transparent, above/below.

No pictures were allowed inside of the buildings, only outside, which made me sad at first because there were so many photo-worthy moments. But looking back on my visit, it made the experience unique — individual to each guest. If you need a break from D.C. museums, request tickets to Glenstone. While it didn’t “restore” all of my woes, there is always room for more quiet contemplation in our lives.

CORRECTION: Due to a reporting error, a previous version of this story stated Glenstone would release February, March and April tickets on Dec. 1. It only released February tickets. The story also stated that Jackson Pollock has multiple paintings featured in the museum. There is only one. This story has been updated.