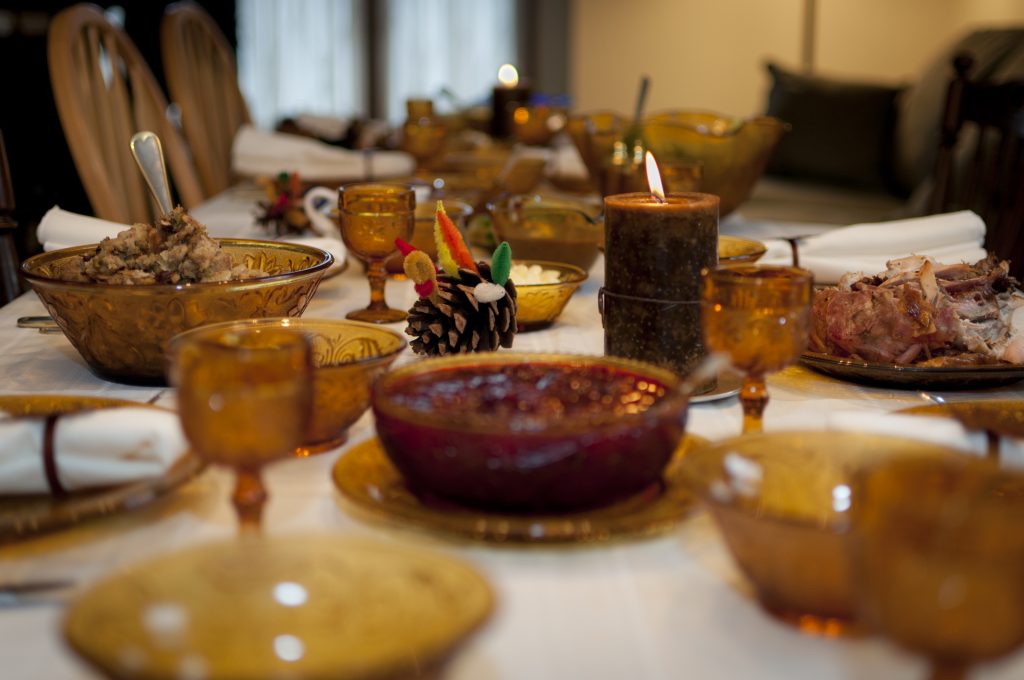 A Thanksgiving table spread. Photo courtesy of vxla via Flickr.

American Thanksgivings are a huge deal. People travel long distances to see their families, cook up feasts for hours and watch football and parades.

While I welcome time off from school to be with family, my relationship with Thanksgiving has been awkward, primarily because of my cultural background. My mom is from Italy and so are my dad’s parents. I was raised mostly by my mom, so I grew up distinctly —frustratingly — Italian. I lived in two worlds, blending seamlessly into both, but never feeling fully at home in either one.

That’s why Thanksgiving has always felt like a time of cognitive dissonance. I knew what I was supposed to do, but the holiday didn’t feel mine. Now that I’m older, I realize that Thanksgiving feels a lot like a metaphor for the changing face of assimilation in this country. This holiday encapsulates the struggles immigrants face to belong in America while seeking to preserve their own ways of life.

For most of my childhood, Thanksgiving was this distinctly American day that required an hourslong drive to my paternal grandparents in New Jersey. When I was there, I felt deeply out of place. Everything from the food to the football felt foreign and distant, and I hated myself for feeling that way. I hated myself for wanting to feel like this holiday was mine too and that I belonged at the table.

This feeling wasn’t helped by the fact that my American family hasn’t been welcoming to my mom. Despite her being from the same ethnic background, my dad’s side of the family never fully accepted her. As I grew up less assimilated and my sister more Americanized, I noticed the preferences given to my sister whereas I met with criticism for being too much like my mom. My mom and her pride in being Italian weren’t welcome because she didn’t bend as easily as my grandparents and their families did when they arrived in the U.S. And I, a child by all means “made in America,” was irritatingly foreign and ethnically confused.

For my grandparents, assimilation meant being invisible. They grew up in a time much more hostile to Italian immigrants. They were shamed into forgetting their language and pressured into putting their lives on the line for a country that made them feel unwelcome just years before. Now, they’ll admit the sacrifice was worth it. Given what they suffered in Italy, I know that they are better off here despite all the pain they faced while immigrating. So, for my grandparents, refusing to fully adopt a harmless “all-American” culture was an insult to the hardships they endured.

Many immigrant families in this country face a similar situation. Groups that immigrated a few generations ago and their descendants chastise us for wanting to hold onto our language and culture. things were hard for them, so why should they be easy for us? Why should we sacrifice so little to gain so much? The thing is, it’s still hard.

This omnipresent feeling of being unwelcome unimaginably wears us down. We still have to justify our existence and prove our loyalty to a country we love but that we often feel doesn’t love us back. As a daughter of immigrants, I feel like I have to choose between belonging to those I was born to and belonging to the country in which I was born. So Thanksgiving, this deeply American holiday, becomes a focal point of the assimilation question. Do we, like my grandparents, bury everything and celebrate like our neighbors? Do we make this holiday our own? Do we chase after a sense of belonging from those who may never give it to us, or do we create belonging ourselves?

This year, my Thanksgiving will not be assimilated. I’ll eat what I want from both cultures, because even though I’m different, home can still be here. I’ll celebrate not living in fear, but I won’t forget those who still are forced to hide because of their immigrant status, or who are deemed threats because of their ethnicity or religion. On this most American holiday of all, I’ll be thankful for immigrants like my mom who, by refusing to be invisible, make the rest of us feel seen.