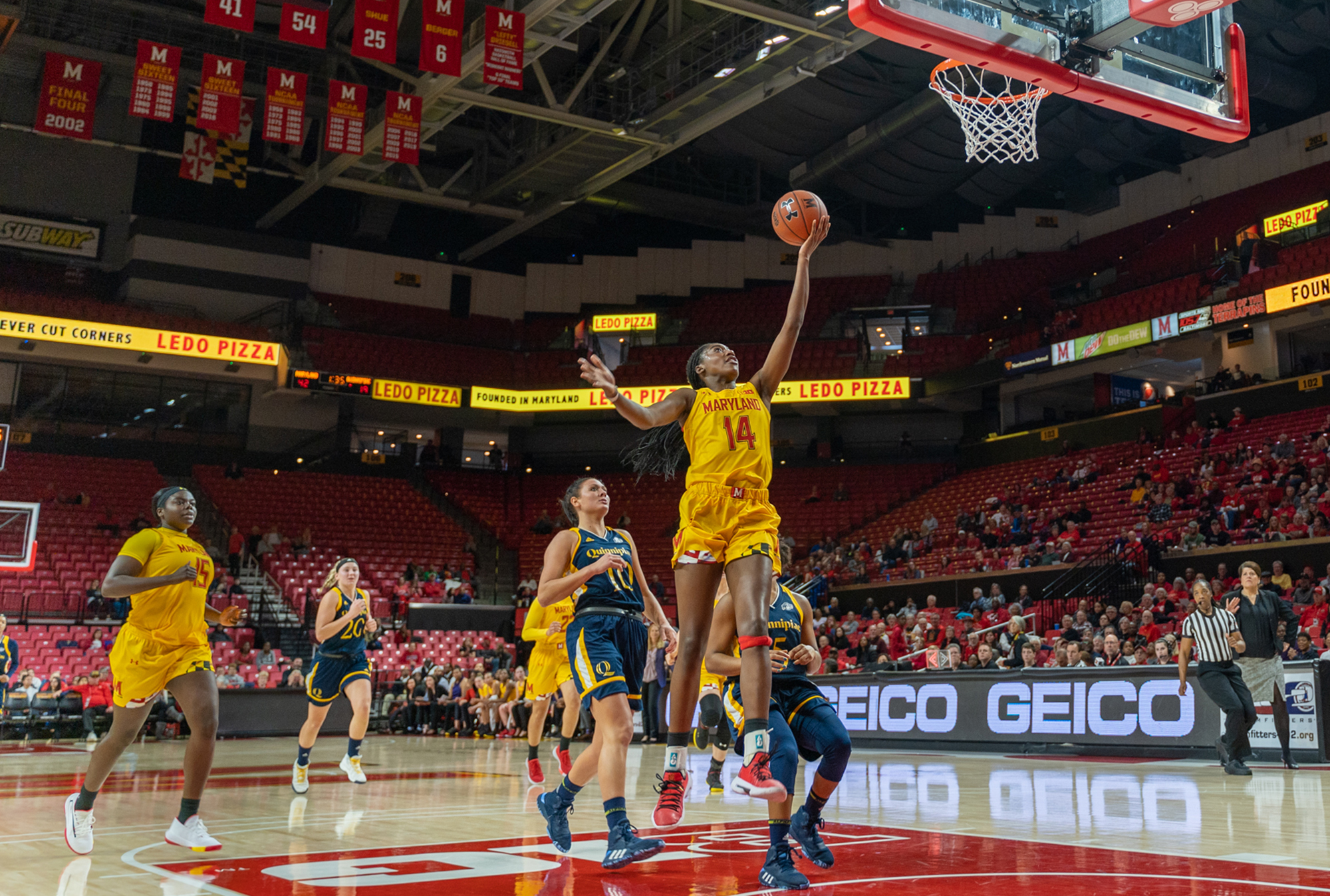 Maryland women’s basketball already held a commanding 21-point lead as the second half started Sunday, but coach Brenda Frese sought to put the game away. So with a full-court trapping defense, the Terps turned their contest with Quinnipiac into a no-doubter.

Frese wants her team to create offense from defense whenever possible, employing full-court pressure that aims to force turnovers for leaking Maryland guards to take advantage of. And with two fastbreak layups to open the third quarter — spelling the start of a 33-4 barrage in the period — the transition style ended the Bobcats’ chances.

The Terps executed their fast-paced strategy to perfection Sunday in a 107-52 win over Quinnipiac, marking the team’s second triple-digit scoring effort this season. Freshmen guards Ashley Owusu and Diamond Miller led the way with career-highs in points, part of a balanced offensive performance that saw six players reach double-digits.

“I thought it was a really inspired game by our team. … I just thought you saw from the minute of the tip it was a balanced attack on both ends,” Frese said. “[It was] probably one of our most complete games. Really excited to be able to see how far we’ve grown as a team on both ends of the floor.”

The Terps jumped on the Bobcats early, locking down on defense and turning rebounds into nine fastbreak points in the opening quarter. Owusu led the charge, showcasing her deceptive handles en route to easy layups or feeds to cutting teammates.

Maryland had arguably its best defensive start of the season, holding Quinnipiac to just seven points on 17.6 percent shooting and rendering it scoreless for a five-minute stretch. The team’s full-court trap didn’t initially produce many steals, but the halfcourt defense allowed few open looks and forced numerous contested 3-pointers.

Some contested shots started to fall for the Bobcats as they outscored the Terps 12-11 and grabbed three more rebounds in the first half of the second frame, with most of the damage coming while forward Kaila Charles sat with two early fouls.

A timeout from Frese got her players back into attack mode, and forward Shakira Austin began to impose her will soon after. She finished with 16 points and a pair of steals in the half, missing just one of her eight shots.

“We definitely realized from the jump they don’t have the height to be able to stop us inside, and coach is always enforcing we’re going to start going inside-out,” Austin said. “I think that helped us the first half a lot, and in the second half everybody else was able to get their shot and be able to ease it out because of the great first half.”

Charles fueled her team to a dominant defensive effort in the third period, holding the Bobcats to just four points on 1-for-8 shooting and forcing 12 turnovers through the team’s press. Even with a commanding lead, the senior forward continued to dive for loose balls and fight for offensive rebounds that helped derail any chance of a Quinnipiac comeback.

It was yet another game for Charles in which scoring wasn’t her biggest impact. The preseason All-American was the team’s fourth-leading scorer coming into the game, averaging 11.7 points per game, often taking a step back and allowing her teammates their chance to shine.

After averaging 17.5 points per game over the last two seasons, she says she’s embracing her role as one of Maryland’s all-around assets, hoping to provide consistent play in all facets that her teammates can follow.

“I’m just doing whatever the team needs me to do,” Charles said. “Getting more rebounds, getting steals, more assists, just being an overall player so I can make impacts even if my shot is not going in.”

Shooting became Maryland’s strength in the fourth, with guards Taylor Mikesell and Sara Vujacic each hitting a pair of 3-pointers. The hot-hand was spread throughout the team, as the offensive onslaught in the second half propelled the Terps to a 55-point win, their second-largest victory of the season, on 59.7 percent shooting.

It was Maryland’s most consistent display of defense and rebounding through its six games, two of the biggest points of emphasis for Frese this offseason.

“I thought [the defensive effort] was sensational. I thought the tone was set when we started,” Frese said. “They came out, the energy was sensational and I thought even when we ascended to our depth there was never a let-off. That’s the kind of pride we have to be able to take.”