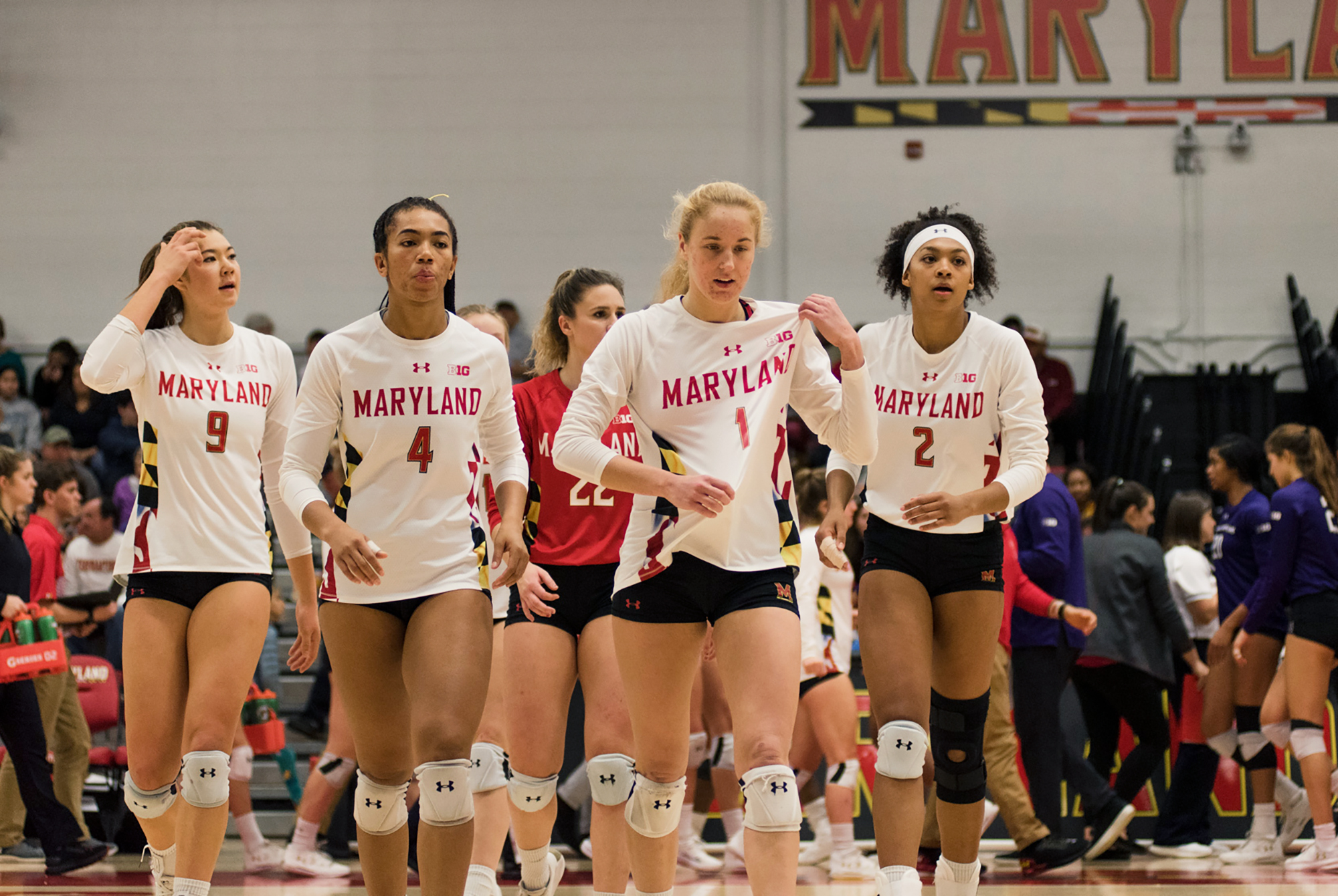 After Maryland volleyball quickly fell behind 4-0 in the fifth set against Northwestern, coach Adam Hughes elected to take a timeout, imploring his team to continue battling down the stretch.

The first four sets had been back and forth, with both teams flashing firepower. Out of the timeout, the remainder of the fifth set was no different, but Hughes’ squad had dug itself too deep a hole and dropped the frame, 15-8.

The Terps’ offense got off to a hot start with a convincing first-set win Sunday. But as the match progressed, offensive inconsistencies cropped up that a hot Northwestern team took advantage of, topping Maryland in five sets Sunday on Senior Day (25-17, 27-29, 17-25, 25-22, 15-8).

“They made a couple big plays to put the pressure back on us,” Hughes said. “Eventually in the fifth, we never found enough time to get back into it.”

The Terps were again without libero Allegra Rivas, the only player averaging more than three digs per set for the team.

Northwestern entered College Park coming off a straight-set victory at Ohio State, a team fighting to make the NCAA tournament. But in the early going against Maryland, the Wildcats still looked like the underdogs.

“I thought we were in a pretty good spot in the first set,” Hughes said.

A 5-0 run capped by a kill from outside hitter Rebekah Rath — who finished with 12 kills and a .150 hitting percentage — put the Terps in good position to steal set one from the Wildcats.

Rath’s put-away gave her team a 10-7 advantage, and it prompted Northwestern coach Shane Davis to take his first timeout. Maryland remained aggressive on offense until the end, and it took the set, 25-17.

The Wildcats turned things around in the second frame, however. They began challenging Maryland’s first touch, and they jumped out to a 3-0 lead in the set.

The Terps found their groove from behind the endline, and two straight service aces from middle blocker Katie Myers put them up by five in the frame. Hughes’ squad dominated the service game in the first two sets; it tallied eight service aces while Northwestern notched just one.

But serves didn’t matter toward the end of the second set, and Maryland allowed Northwestern to sneak away with a 29-27 win.

“Our serve and pass started to let us down,” setter Taylor Smith said. “The first touch and their service pressure was a lot.”

The offense that propelled Maryland in the first set and a half disappeared completely in the third. The team was out of rhythm for most of the frame, and they lost it by a score of 25-17.

Rath and Myers led the attack in the fourth set. As the Terps fought to push the match to a fifth frame, the duo combined for 30 kills, with middle blocker Jada Gardner adding another 13 put-aways. The trio helped keep the team’s hitting percentage at .213 while Northwestern attacked at a .243 clip.

In the final set, the Wildcats put together a 5-0 edge and continued from there to go up 8-2, forcing Hughes to call his second timeout. The squads traded points, but Northwestern’s large advantage allowed it to pull out a five-set match win, spoiling Maryland’s hopes of concluding its home finale on a positive note.

“We knew it would be a tough match,” Hughes said. “Neither of our records really indicated how good we are. I think the conference is just challenging.”