Maryland volleyball struggles without Allegra Rivas, falls in straight sets to No. 25 Illinois 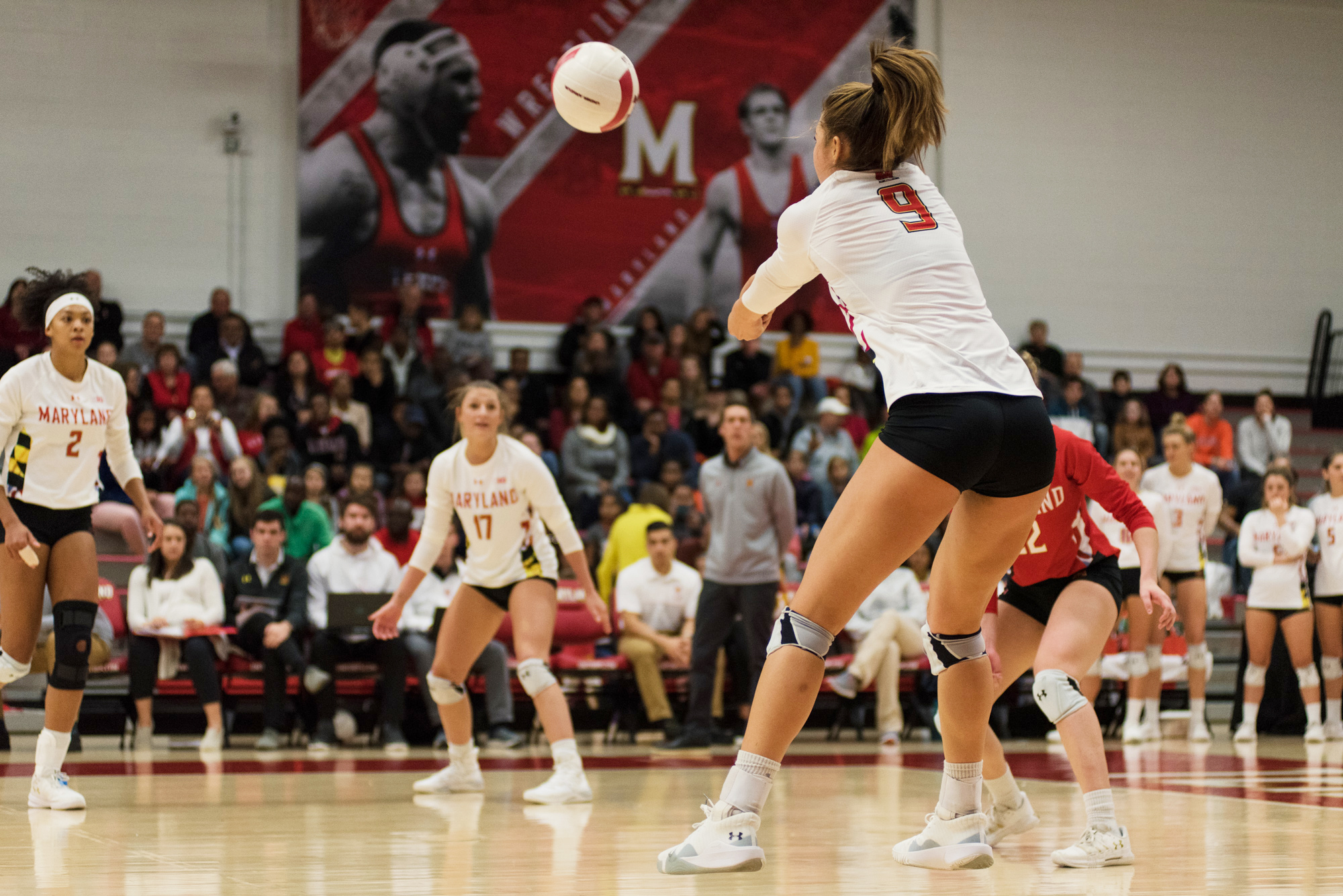 In the back row of Maryland volleyball’s serve receive, outside hitter Erika Pritchard sank to her knees in an attempt to return a delivery from Illinois defensive specialist Taylor Kuper. Pritchard deflected the serve far out of bounds, prompting coach Adam Hughes to take his first timeout of the third set.

Out of the break, Pritchard replicated the miscue, putting the Terps in a five-point hole they would never recover from.

Hughes’ squad was without starting libero Allegra Rivas for the first time this season, and the back-row defense struggled in her absence. Illinois’ offensive attack proved to be too much for the depleted Maryland defense, and the Fighting Illini left with a straight-set win Friday night (25-23, 25-19, 25-19).

“Obviously, we were disappointed in the result,” Hughes said. “I liked our effort, but I don’t think we were clean enough in the serve and pass component of the game.”

Defensive specialist Maddie Naumann got her first career start in Rivas’ place. Rivas came into the match leading the team in digs, posting 413 on the season, while Naumann had just one coming into the matchup.

While Naumann couldn’t mirror Rivas’ usual dominance, the 5-foot-9 transfer from Miami finished the match with nine digs, tied for the team lead with setter Nicole Alford. Though Naumann didn’t shine at libero, Hughes admired her ability to step up.

“I’m extremely proud of Maddie,” Hughes said. “We put her in a really tough spot, and she went about her business in the right way.”

The Terps entered Friday’s bout determined to get coach Adam Hughes his second-ever victory over a ranked team, and they put up a fight in the first set.

The offensive numbers were spread evenly for Maryland early on. Outside hitter Rebekah Rath finished the first frame with five kills while outside hitter Erika Pritchard had three putaways going into set two.

Still, the Terps relinquished a five-point lead in the set, ultimately falling as Illinois imposed its will.

“They were really tough on serves,” Alford said. “We just didn’t have the opportunities that they did. That’s something we’ll take a look at before Sunday.”

After nearly coming out on top in the 25-23 first set defeat, Hughes’ squad fell behind quickly in set two, but a 5-0 run — capped by a Rath kill — brought the Terps back into it. Later in the set, the back-row defense let Maryland down.

Nine of Illinois’s final 13 points in the second set came off kills, including four from outside hitter Jacqueline Quade, who went home with a game-high 15 kills on a night where she hit just .089. Still, Quade had an easy time getting the ball down on Maryland’s back-row defense, propelling her squad to the 3-0 win.

The Terps will again be without their starting libero again on Sunday as they face Northwestern in their final home match of the season. But they remain confident, having played — and beaten — the Wildcats earlier in the year.

“There are some things that Illinois does differently than Northwestern,” Hughes said. “The good thing is we’ve seen Northwestern before.”