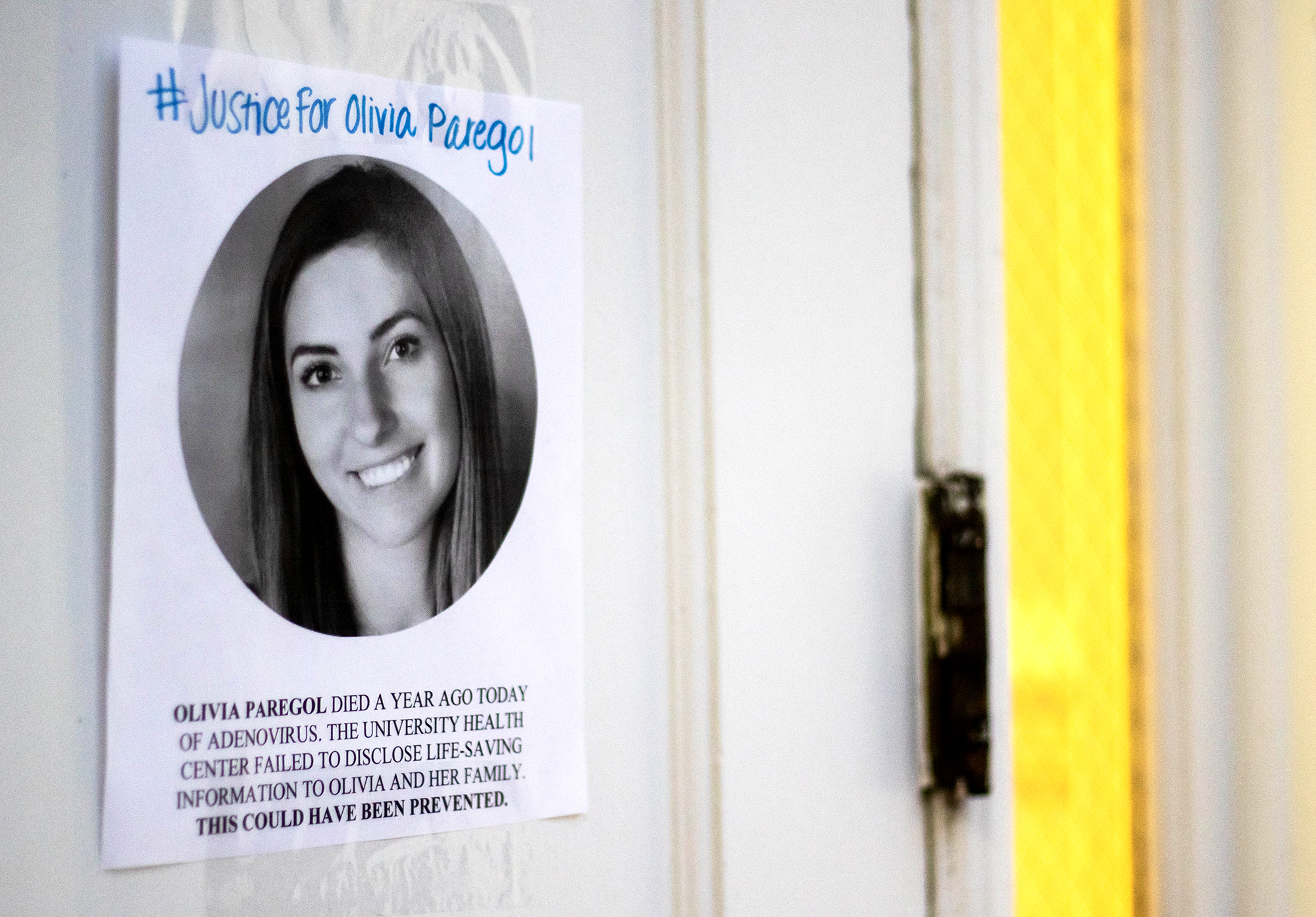 A 'Justice for Olivia Paregol' flyer hangs on the door of Taliaferro Hall. Paregol, a University of Maryland student, died of adenovirus-related complications on Nov. 18, 2018. (Julia Nikhinson/The Diamondback)

The moon shone down on Riley Whelan as she walked around the University of Maryland on Sunday night. She glanced up at it, thinking about what her friend Olivia Paregol would have done if she were there.

“She was obsessed with the sky,” the sophomore communication major said. “She would just stop and stare at the moon, and we would be like, ‘Olivia, come on!’”

On the eve of the first anniversary of her death, a group of Paregol’s friends — still hurting from the loss and aiming to call attention to the circumstances that surrounded it — trekked through the cold to post flyers on doors and windows across the campus.

“Olivia Paregol died a year ago today of adenovirus,” the sheets of paper read. Then, in bold: “This could have been prevented.”

Paregol, a freshman criminology and criminal justice major, died from pneumonia last November after contracting a serious strain of adenovirus, which afflicted more than 40 students in an outbreak last academic year.

The university didn’t alert the campus until 18 days after it first knew of the outbreak. Paregol’s family didn’t know she could have had the virus until her father called then-University Health Center director David McBride, looking for answers.

Paregol’s doctors switched course after that phone call, the Washington Post reported in May, but it was too late. She died five days later.

“We’re still angry,” Whelan said. “And we still think about it.”

The group hung nearly 100 posters on dorms and academic buildings. Some of them, including one on the door of the health center, were quickly removed.

Any flyers that were posted in buildings the student affairs department manages, including dorms, the health center and Stamp Student Union, were moved to nearby bulletin boards in accordance with university policy.

The flyers, Whelan added, were the group’s way of encouraging students to become familiar with the events that led up to Paregol’s death, which she believes many still don’t understand.

That was reaffirmed for Rachel Jessee, a sophomore government and politics major, after she hung signs outside of McKeldin Library. She said she was approached by students who wanted to learn more about Paregol and how she died.

Paregol lived in Elkton Hall, the dorm hit hardest by an outbreak of mold last fall. Experts say mold doesn’t cause adenovirus, though it can result in respiratory irritation and increase susceptibility to a viral infection. Ian Paregol, Olivia’s father, has expressed concern that the mold in her dorm worsened her condition.

Paregol had been taking medication for Crohn’s disease, weakening her immune system and making her more prone to contracting the virus, which typically isn’t serious for people with healthy immune systems. The university considered — but ultimately decided against — notifying students in Elkton and those with compromised immune systems about the virus, the Post reported.

Gov. Larry Hogan called for an investigation into the university’s response to adenovirus in May, prompting the University System of Maryland to assemble a panel dedicated to the issue. Its findings, released in a 141-page document last week, said the university didn’t break any protocols, but that communication between departments was lacking.

“Why didn’t they contact Olivia or my family and tell us there was an adenovirus outbreak?” he asked in an interview with The Diamondback last week. “That’s still not answered.”

Sarah Hauk, a close friend of Olivia Paregol’s who had also hung posters, said the release of the report so close to the anniversary of her death felt “a little careless.” She was sitting in English class when she saw it had been finished and said it “sent [her] into this spiral.”

Whelan and her friends had been considering different ways to honor the anniversary of Paregol’s death, but the report spurred them to take public action.

“It just fueled the fire,” she said.

Olivia’s friends visited her grave on Monday, and — “by the grace of God,” Hauk said — ran into Olivia’s mother. They told her about their posters, and Ian Paregol said the family treasured the gesture.

“We greatly appreciate it to keep this issue alive, because we know that report has issues,” Ian Paregol said.

A campus email sent Nov. 13 with the report’s results also touched upon the anniversary of Paregol’s death, with the university offering “condolences to her parents, family and friends.” University spokesperson Natifia Mullings wrote in a statement that the Division of Student Affairs is working to plan a memorial service close to the end of the academic year “to honor students who have passed away.”

But the university did not release any statements on the anniversary — something that angered her friends, who said she deserves more public acknowledgment.

“I don’t know how someone can get up and go to work on that day, and not think about how it affects her friends and family,” Hauk said. “It’s an everyday thing for us.”

Before the group gathered to hang the posters around the campus, they met for a more private celebration of Paregol’s life at Whelan and Hauk’s apartment. They shared pizza and traded some of their favorite memories of “Liv,” a young woman they say was quick to make friends and had an unparalleled spirit.

It’s a memorial Ian Paregol said his daughter would have loved.

“Olivia would not want to be, necessarily, the center of attention. And she would be much more at home just kind of sitting around and telling stories and eating pizza,” he said. “That’s definitely what she would want.”