No. 9 Maryland women’s basketball spreads the wealth in 88-54 win over George Washington 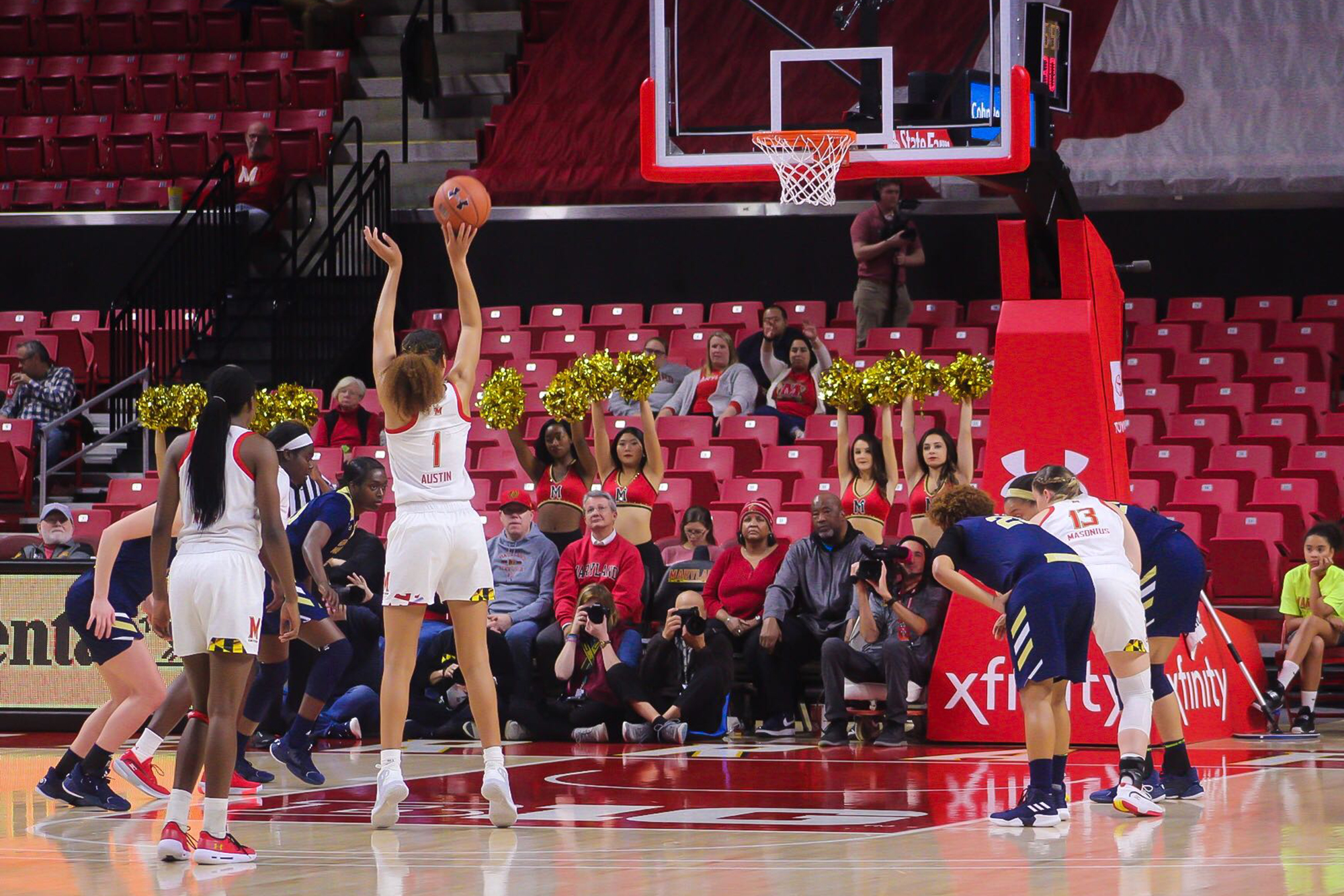 Rather than finding offense for herself, forward Shakira Austin kicked out to the corner for Ashley Owusu. The guard pump-faked, freezing her defender long enough to swing the ball to guard Taylor Mikesell for the open 3-pointer.

Ball movement was the focus from then on as the Maryland women’s basketball team tallied 23 assists on 33 field goals in an 88-54 win over George Washington on Wednesday night.

Mikesell led her team with 19 points and hit five triples for the second consecutive contest, benefitting from Maryland’s commitment to playing offense inside-out and turning defensive stops into quick scores.

“I liked how we set the tone early, especially with our defense,” coach Brenda Frese said. “[Taylor has] been ready from the tip … she’s really locked-in in the last two-to-three weeks defensively. Her game has become really well-rounded and just makes us a better team.”

Maryland hit the ground running with Owusu finding guard Mikesell on a cross-court pass for an open midrange jumper in the game’s opening seconds, the first of Owusu’s six first-half assists.

After forcing a shot-clock violation on George Washington’s first offensive possession, forward Kaila Charles swished a pull-up jumper from the left elbow to put the Terps firmly in control early.

Getting Austin the ball on the block was the game plan in the halfcourt, allowing her to assess how the defense reacted to her inside presence. She would then either use her size to get an easy layup or find open shooters if their matchup came to help.

The strategy worked all night as the 6-foot-5 sophomore dished out four assists, tying her career-high for the second consecutive game after having no more than two in any prior game. She was a force on the other end, too, masking defensive lapses with four blocks and four steals.

“I could swear I had more than four [assists], but it’s just knowing where the help comes from and being patient with the ball,” Austin said. “The shooters stay out on the wing and they know that the [defenders] are going to collapse on me, so I just find them.”

The team started the second frame much the same, employing its full-court trapping defense and running well in transition. But the Colonials’ 10-2 run midway through the quarter exploited Maryland’s waning focus and cut the deficit to 12.

With her team losing the rebound battle by 10 after George Washington caught fire, Frese called a 30-second timeout that recalibrated and revitalized the Terps. Back-to-back 3-pointers from Mikesell and forward Faith Masonius sparked an 11-0 sequence soon after that helped stretch the lead to 22 by halftime.

“Rebounding is still an area of concern. I think from our end [there’s] obviously not as many [offensive] boards for us to go get because we’re shooting it at such a high rate, so not a concern there,” Frese said. “But obviously on the defensive end that’s a discipline to a mentality to box out … the next area for us to be well-rounded is on the rebounding end.”

The Terps came out of the break ready to run away with the game, displaying more determination on the glass and a desire to get to the free-throw line, hitting 6-of-8 attempts in the frame.

Maryland continued to share the ball well and consistently made the extra pass, forgoing good shots for great ones en route to a 54.1 shooting percentage in the contest. Owusu and Austin set the offensive tone, Mikesell shot lights out and the Terps never looked back.

While she scored a season-low eight points, Owusu tied her career-high with nine assists and pushed the tempo all night. Austin, who played with Owusu before coming to Maryland, said she’s glad her chemistry with the point guard translated to the collegiate level and is helping the offense thrive.

Forward Blair Watson put the game out of reach with consecutive makes from behind the arc in the opening minutes of the fourth quarter. The team cruised to a 34-point victory from then on, with guard Diamond Miller notching five points, two blocks and a steal in the game’s final minutes.

“It’s something we’ve really spent a lot of time talking about, what our identity is going to be. That our offense can’t be that if our shots aren’t falling then we can’t play defense, it’s got to be wired the other way around,” Frese said. “We’ve definitely bought into that. I think you’re able to see the mentality from the defensive end that they’re really starting to set the tone with.”