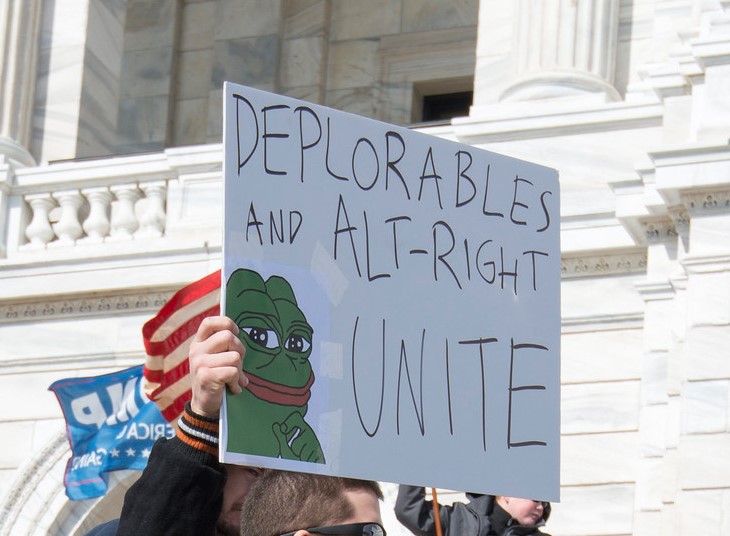 Protester at a Trump rally holding a sign with Pepe the Frog on it. Photo courtesy of Fibonacci Blue.

There’s a certain tension I’ve noticed in some of my classes when someone references a generational joke or meme in general discussion.

Last week, while discussing a poem about the apocalypse, a few students explained the phrase “yeeting into the void” to my professor in order to relate to the poem’s neutrality about the end of times. I found myself embarrassed for a minute, worried my professor would see it as a trivial connection. But he affirmed it was a good comparison, and spent the rest of class (hilariously) discussing the potential comforts of “yeeting one’s self into the void.”

I’ve been thinking about the broader applications of Gen Z and millennial memes and humor a lot. Others have, too. Over the last few years, several op-eds have been written about it: some critical, but others understand humor plays a big role in younger generations’ media consumption and communication. It’s been called “shocking,” “absurdist” and “dark,” but the recent injection of our generation’s humor into my class discussion has made me consider its role in academia, political conversations — and, further, its worthiness to exist in these spaces.

One recent meme that’s been circulating on social media has also made a noticeable impact on the real world: the “OK, Boomer” meme. The phrase is often used to shut down members of the baby-boom generation in a simple and unarguable manner, invalidating any point in an argument by invoking their age as a disqualifier to participate. It’s gained attention from a recent New York Times article proclaiming the joke as the “end of friendly generational relations,” and its use by New Zealand lawmaker Chlöe Swarbrick during a parliament session. It’s also attracted criticism — one conservative radio host called it the “n-word” of ageism.

The “OK, Boomer” meme is only the most recent crossover between young people’s online humor into broader conversations about political and social issues. After memes comparing Chinese president Xi Jinping and Winnie the Pooh began circulating, censors in the country banned any images of the cartoon character. The Anti-Defamation League has categorized multiple popular memes, such as “Pepe the Frog” and the OK hand gesture, as official hate symbols because white supremacists used them online. Even our president posted a clip from a Nickelback song, which has been used as a meme in the past, to criticize Joe Biden’s potential involvement with Ukranian gas executives.

The reach of this phrase and other memes demonstrates the broader cultural impact our generation’s humor can have, as well as its deeper roots in generational anxieties and trauma. The “OK, Boomer” meme could just be read as young people mindlessly getting a dig at older generations — or, it could reflect our generation trying to cope with the rising costs of living and education, a potential recession and the climate crisis. Some view these stressors, especially climate change, as direct results of  baby boomers’ actions. The phrase “OK, Boomer” is a rhetorical attempt to reflect that belief.

The idea of humor as a coping mechanism isn’t new, but the implications of anxiously telling jokes at an awkward house party are widely different than those of a widespread, generational pattern of expression. Considering memes as a representation of generational anxiety and as a rhetorical tool could help to understand the mindsets and philosophies dominant in our generation. Understanding how, as a whole, young people are feeling and thinking about big social issues could create new conversations in academia, activism, government, economics and more.

Gen Z and millennial humor — and the time young people spend online participating in it — is not wasteful or meaningless. While not every meme or joke will provide us with an earth-shattering glimpse into young people’s minds and opinions, this form of communication is useful as a whole, both on and offline.