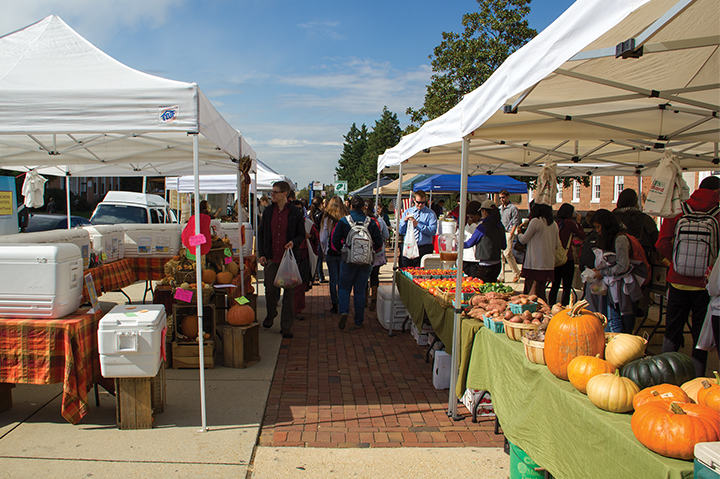 The Maryland Farmer's market comes to campus every Wednesday in front of Cole Field House (File Photo/ The Diamondback).

When the Farmers Market at Maryland moved to Tawes Plaza Garden, I was thrilled. Back then, as a student without a car, my most viable grocery option was Target Express, which offered a measly selection of produce and a weirdly large variety of cheese. The farmers market gave me the option of eating a range of fruits and veggies, while also supporting local and sustainable agriculture.

The market was located between the University of Maryland campus and some of the neighboring residential areas, in the parking lot behind City Hall. In the last few months, the market was down to two vendors, both of which were losing money due to the steadily decreasing vendor and customer attendance. While it would be easy to treat this as a sign that students and city residents are not investing in sustainable agriculture, it actually signifies the opposite.

College Park isn’t really a food desert anymore; with the Whole Foods in Riverdale, the opening of Lidl and the growing farmers market on campus, people in College Park have access to a wider range of foods and groceries. The vendors who sold goods at the Downtown Farmers Market still have the option to sell locally — the market was basically equidistant from two other farmers markets in College Park.

If anything, College Park residents are investing in sustainable and local agriculture more than ever. Including the Downtown market, the city of College Park has four different farmers markets, each catering to a different neighborhood. It sounds counterintuitive, but the fact that the Downtown market in particular has tapered off demonstrates that the other three have been providing growing access to the same kinds of goods and services in other parts of the city.

According to NPR, the frequent closings of farmers markets is due to oversaturation. The number of farmers markets in the U.S. has been rapidly increasing, with over 8,600 open in 2019. Those involved in farmers markets across the nation seem to agree that these markets serve a purpose — providing much needed access to fresh food.

Too many markets in one city eliminates this need, to the extent of oversaturation. Diane Eggert, executive director of the Farmers Market Federation of NY aptly explains “We don’t need more markets — we need stronger and more viable markets.”

There’s no debating the necessity and value of farmers markets. They certainly aid food deserts, and those that accept Supplemental Nutrition Assistance Program benefits are also filling critical nutritional gaps in low-income communities.

But having an excess of markets doesn’t benefit anyone. It’s important to know when it’s time for a market to close and recognize that closure might not be a bad thing. While it’s unfortunate that the Downtown Farmers Market may not reopen, it did a good job of filling a food void that the city has finally grown to address on its own.