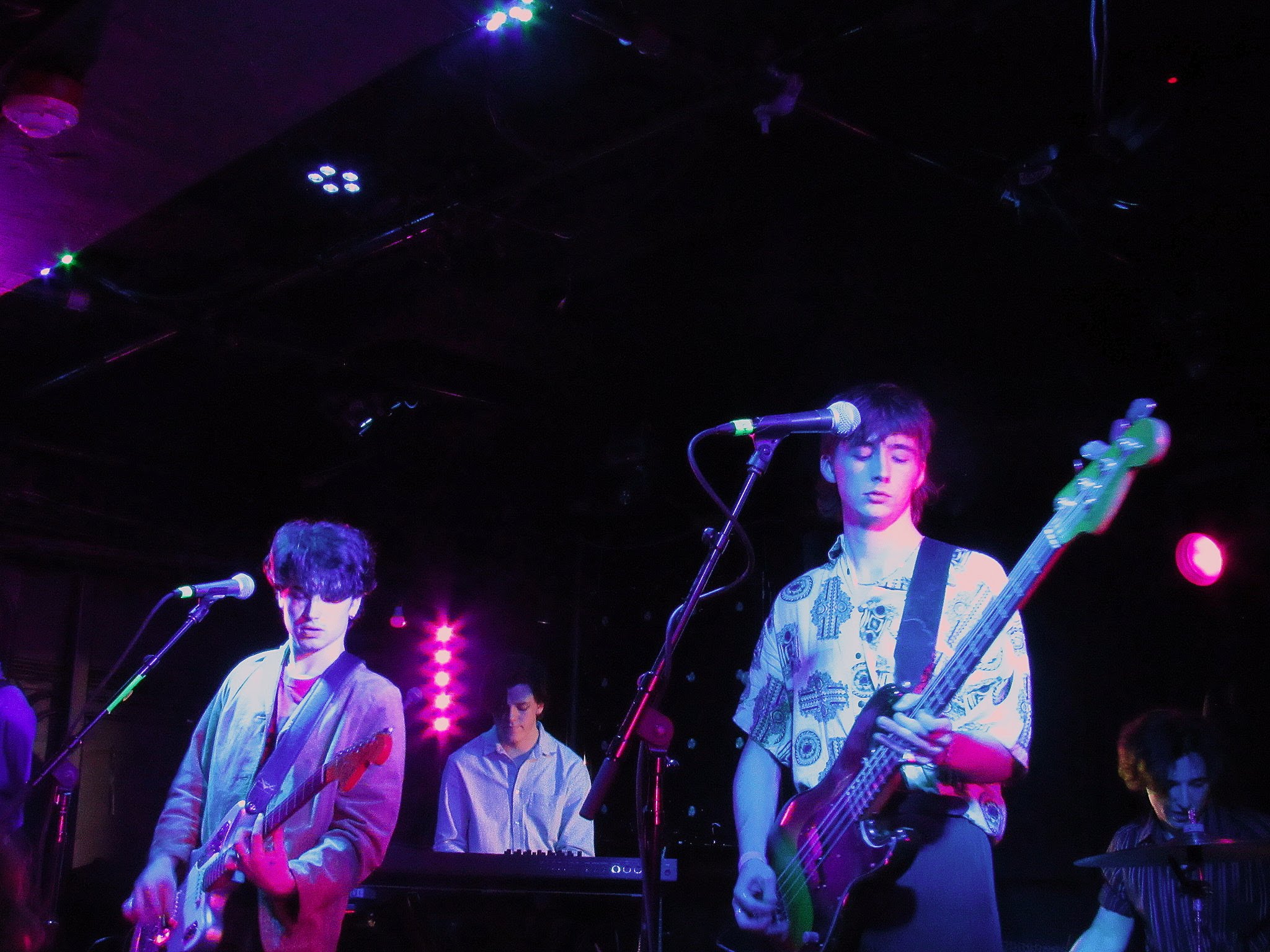 Inhaler performing at the Rock and Roll Hotel (Joy Saha/For The Diamondback.)

As someone who’s a fanatic for all things indie pop and alternative rock, I felt quite ashamed I hadn’t heard about or listened to Inhaler sooner. Watching the band perform at the Rock & Roll Hotel in Washington, D.C., on Tuesday night was an out-of-body experience.

Inhaler is a four-person Irish band made up of Elijah Hewson — who also happens to be Bono’s son — Josh Jenkinson, Ryan McMahon and Robert Keating. And although the quartet is technically a boy band, calling them one sounds sinful and a bit insulting. Their sound and signature style are nothing like the sappy and superficial tunes most short-lived boy bands produce. The talent they exude is also far greater than any mainstream boy band even possesses.

I came to the concert eagerly anticipating Blossoms’ performance. I’ve been a fan of the English rock band’s music for a while, and I frequently jam out to their tunes “Charlemagne,” “Honey Sweet” and “Cut Me and I’ll Bleed.” However, I left the night with a new appreciation for Inhaler and a strong desire to update my playlists with their music.

Upon entering the small-yet-cozy venue, I was met with a semi-packed room filled with concertgoers of all ages. There were plenty of 20- and 30-something fans, and halfway through Blossoms’ act, I ran into two younglings wearing Blossoms t-shirts.

I stood near the corner of the stage surrounded by people sporting multiple tattoos, classic Doc Martens or leather jackets. Many were busy chatting with their friends and sipping drinks as they waited for the show to start. With my primitive camera slung around my neck and both my hands bearing the large black Sharpie “X” of shame, I oddly felt at one with the audience in my notorious Tumblr girl outfit of high-waisted mom jeans and black high-top Chuck Taylors.

Inhaler took the stage around 8:30 p.m., and I swear, once they started playing their first song, I felt my whole body vibrate as if each note and chord being strummed were pulsating through my entire body. Maybe that sensation came from the fact that I was standing inches away from the loud speakers, but it enhanced the whole concert experience for me.

The aggressiveness of the guitars and drums during certain moments of the show served as nice embellishments when paired with Hewson’s raspy vocals. The audience members easily reciprocated the vibrant energy the band put into performing each song.

All around me, concertgoers were screaming and throwing their hands up high. I watched as a girl in front of me feverishly took off her jacket and started dancing like no one was watching. The pot-bellied man who kept elbowing me from behind was flush from singing and dancing throughout the act. Sure he was annoying, but at least he was enjoying the show.

Between snapping photos and updating my Snapchat story, I found myself dancing along to the music, even though I didn’t know any of the words. A small part of me wanted to snap as many pictures and videos as I could in order to hold onto certain memories. But I realized that the best way to savor this performance was to just live it in the moment.

I’m not sure what it is about listening to bands perform live that makes their music so much more enjoyable, but Inhaler’s performance was certainly one for the books. Sure, I can listen to their songs on repeat when I’m walking to and from class, but it’s not the same without the enthusiastic fans screaming in the background or the spontaneous guitar riffs and floor-shaking drum solos.

During my ride back to campus, I found myself recreating the entire performance to my Uber driver and encouraging him to give the band a listen. He said he most definitely would.

Inhaler is currently on tour with Blossoms until Nov. 14. Their last performance in the States will be in Los Angeles and although I may never have the chance to see them live again, at least I have those photos and videos to relive my concert experience.