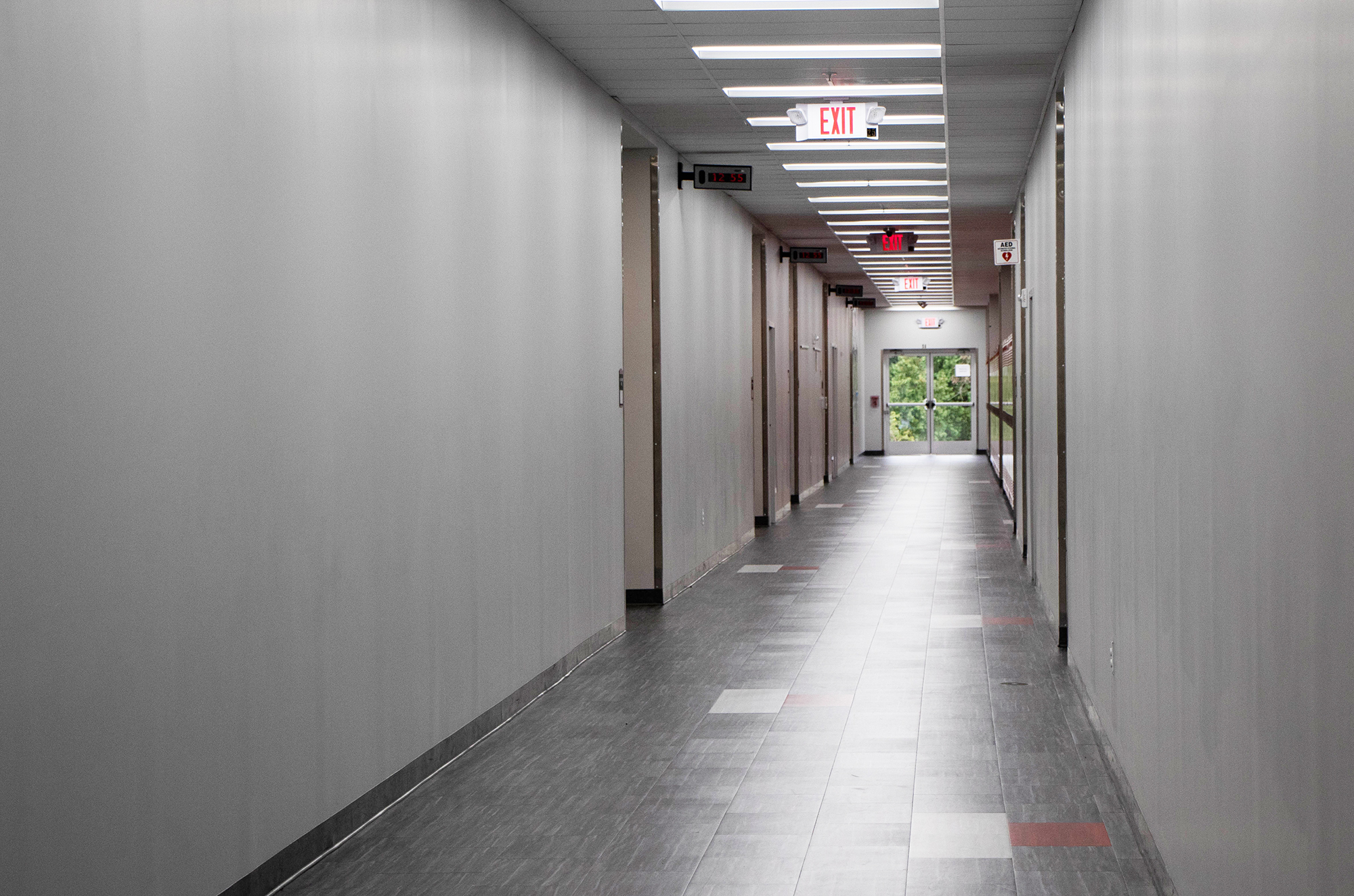 One of the hallways of College Park Academy. (Julia Nikhinson/The Diamondback)

When Gov. Larry Hogan visited College Park Academy in January, Dylan Burns remembered feeling frustrated. As Hogan arrived to discuss a proposed boost in funding for charter school construction, Burns — then a student at the academy — recalled a poster covering up a hole in the school’s drywall. It was a problem that had become somewhat commonplace in the building, which was built in 2017.

Burns said he wishes he had approached Hogan, who has praised the academy as the future for charter schools in the state.

“It was being touted as this big new shiny toy, but then you press the button and the toy breaks,” said Burns, who graduated in the spring.

Experts say the building was intentionally designed to be a flexible space — where walls could be removed, for example. But former students say the building’s construction reflects poorly on the budding charter school.

As of last school year, the academy was patching holes in the wall about once a month, said Duane Arbogast, the school’s interim executive director.

When students opened doors too quickly, doorstops were of little help, and ultimately had to be reinforced. Dents and holes have also popped up as students, jostled in crowded hallways, have bumped into walls.

The walls, which are made of 5/8-inch drywall, weren’t built with concrete blocks, and are not considered high-impact. Officials, such as Arbogast, say that’s because it’s meant to be a “flex space.”

“The designers purposefully designed it so that if there was no longer a school there, and it returned to mixed use, the idea is that it would be a successful space, so that the adjustment would not be too costly,” Arbogast said.

The academy’s building was constructed by St. John Properties, a company owned by university alumnus Edward St. John, who donated $10 million for the construction of the Edward St. John Learning and Teaching Center back in 2011.

At the dedication for College Park Academy, St. John boasted about the speed and low cost of the school’s construction.

The construction company built the facility in under a year, he said, adding the average cost for a school built by the state is about $20 million, but it took St. John Properties about $10.2 million.

“You all got this school for about fifty cents on the dollar,” he told the crowd.

St. John Properties deferred to the College Park Academy for comment on this story.

The walls weren’t the only problem students noticed once the building opened. A sink in the building started falling off of a wall after students leaned on it, for example. But those are the sorts of kinks that require ironing out when a new building opens, said Carlo Colella, the university’s administration and finance vice president and a member of the board of directors for the College Park Academy.

“You try to address that during design and construction and then when you actually occupy the space, sometimes you need additional treatment,” he said.

Still, Kiah Patterson, who graduated from the academy in the spring and now attends Hollins University in Virginia, called the setup “discouraging.”

“It was kind of murmured around our school that like, ‘Oh, this building is an office building. Or it was quickly put up so that if this school fails, it can be easily transferred into an office building,’” she said.

The building was originally a beacon of hope for the middle and high school, which was initially run out of a church in nearby Hyattsville. It was billed as a space customized for the students there, who complete a unique mix of online and in-person courses.

But its construction quickly became an object of scorn for some students. Burns mounted a campaign to become the secretary of the academy’s student government focused almost entirely on the issues associated with the walls — and won.

“Any time I attacked the walls, I got applause,” he said.

He crafted a petition calling the walls “substandard” and arguing that they “present a very real risk to the health and wellbeing of students and faculty,” which gathered more than 400 signatures from the student body of 612.

Samantha Lawson, a recent graduate of the school who now attends Howard Community College, said she once saw two friends jokingly shoving each other in the school. When one of them tripped, his elbow hit a wall in the building, causing a dent, she said. Another time, a friend of hers swung open a door, only to have it puncture the drywall.

Plus, the way the walls are built can make the building noisy at times, she said.

“If people are taking the SAT,” Lawson said, “basically the entire school has to be quiet.”

In the Independent Learning Center, a quiet study space for students, activities from the gym next door are often problematic, Burns said.

“If you’re in the rooms that are adjacent to the gym, any impact to the walls in the gym makes the walls kind of vibrate,” he said. “If you wanted to study quietly you kind of had to blast music and ignore your desk vibrating.”

Ralph Bennet, a professor of architecture at the University of Maryland, said the walls in the building are more typical of light-use commercial spaces. Schools, meanwhile, are typically heavy-use — which is why they “ideally” should have concrete walls.

Concrete would likely have been more expensive, though, he said.

“I suspect this is a question of economy,” Bennet said. “It’s not a scandal, I think, and it’s easily repaired.”

Administrators opted to place noise reduction panels in the cafeteria, for instance, strengthened doorstops and decided to minimize the number of rolling chairs, which were also bumping into the walls and leaving marks.

[Read more: Your guide to the candidates in College Park’s 2019 election]

University President Wallace Loh, who serves as chairman of the academy’s board of directors, said the school’s unique focus on technology and online learning means it makes sense for it to be designed differently.

“Is this a valid concern that the walls are thin?” he said. “Well, yes, but that was the way it was designed.”

The Children’s Guild, the group that manages the school, plans to paint murals over many of the walls in the building to deter students from hitting the walls in any manner.

“When the walls are connoting messages, when the walls have value, it actually changes behavior,” said Arbogast, who is also the Guild’s chief of strategy and innovation. “There is an appreciation of what’s on the walls and consequently less chance for people to bump into walls or destroy walls — either purposefully or accidentally.”

It’s a plan that the Guild has enacted at some of its other schools, including the Monarch Academy in Glen Burnie, where vibrant, professional paintings adorn many of the walls.

The displays in College Park Academy may also include panels for displaying student work, Arbogast said, which would, in turn, enhance the structural integrity of the walls. In the past, this artistic work has cost the Guild about $5 per square foot of building space. In total, the building is more than 50,000 square feet.

Academy officials have yet to decide precisely how much of the building would be painted or what designs would be included. Several focus groups have been convened to assess questions like these, Arbogast said.

Charter schools in Prince George’s County receive just over $11,000 per pupil, according to a county budget document. The funding for the mural would come out of this budget, Arbogast said, although it could be spread out over a number of years.

Last legislative session in Annapolis, Gov. Hogan proposed a bill that would establish a fund for charter schools. It would have awarded the schools an additional $1,600 per student annually but it stalled in committee.

Hogan was discussing this plan when he visited the school back in January.

Meanwhile, even though Burns said he appreciates the plan for a mural, he thinks it’s unlikely to address the problem at hand.

“Nobody’s bumping into these walls or destroying them on purpose. Same with the sinks,” Burns said. “If we get these beautiful murals … and then some kid bumps into them and destroys them all, then not only does that suck because that’s going to be a real bummer seeing somebody’s art destroyed, it’s also tons of money wasted.”