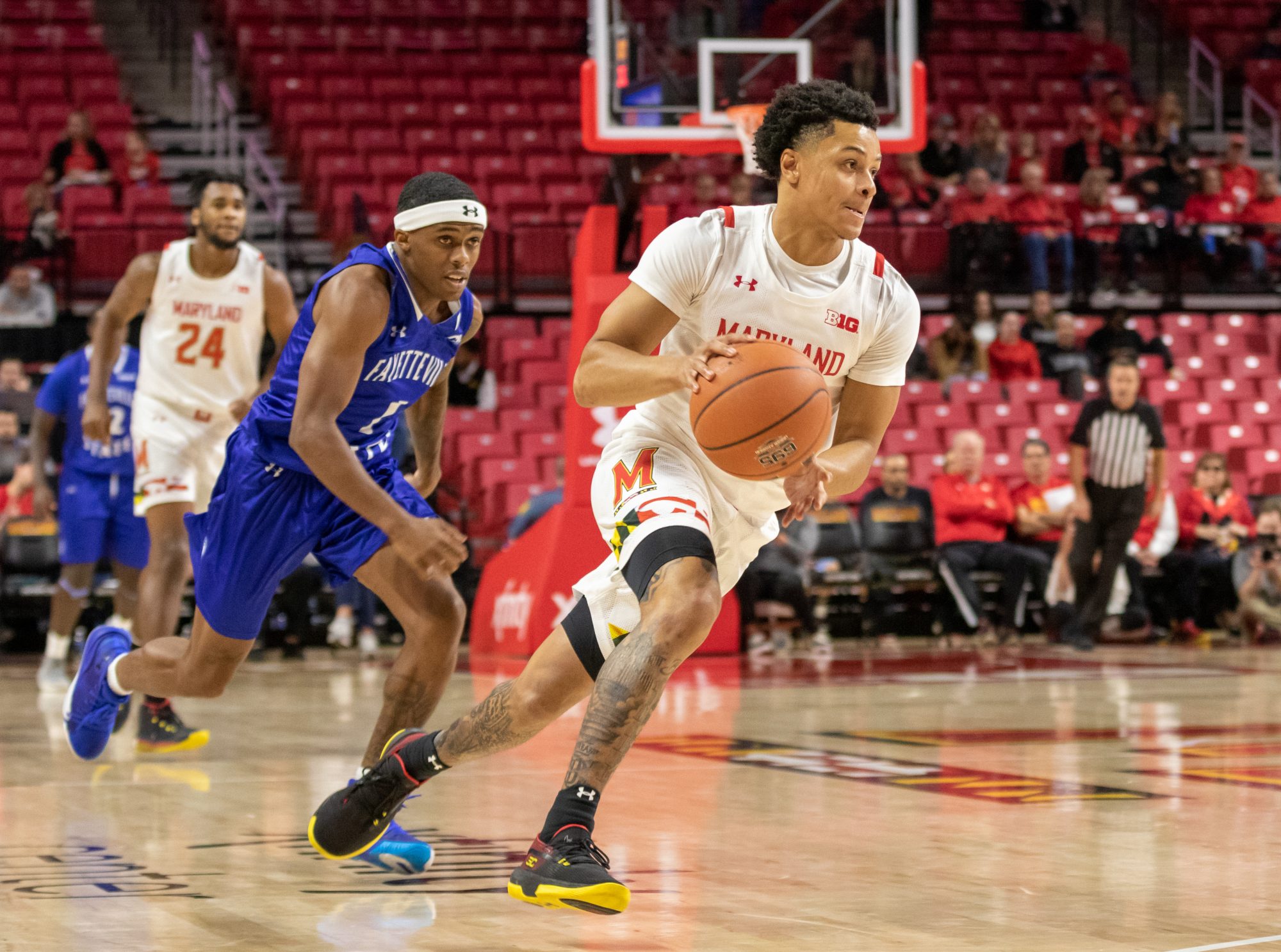 Eight minutes into No. 7 Maryland men’s basketball’s exhibition game against Fayetteville State, the Broncos cut the Terps’ lead to 16-15. Following the under-12 media timeout, guard Anthony Cowan made a pair of free throws, and Maryland broke out its press.

The press immediately paid dividends. Cowan intercepted a pass and took it the other way for a transition layup that started a 19-4 run and allowed the Terps to run away with the exhibition game on Friday night at the Xfinity Center, 76-43.

Here are three takeaways from the team’s tune-up ahead of the regular season.

Shortly after last season ended, Wiggins met with coach Mark Turgeon. The message was simple: Wiggins had to raise his game to thrive in a larger role.

“Aaron, if you play like you did as a freshman as a sophomore, then we aren’t going to get any better,” Turgeon recalled after last Sunday’s open practice.

Wiggins took that message to heart, and worked tirelessly to improve. During the summer, there were times when Wiggins was in the gym four times in a day.

The routine was ball-handling in the morning, then practice with the team, a session in the weight room and shootaround at night.

“With the way we ended last season, and wanting to be a big part of the team and have a really positive impact, just wanted to work hard and get better as an individual,” Wiggins said following the team’s open practice on Oct. 27. “And I knew it would transfer, and on the court the team would be a little better.”

Turgeon said the offense will go through the sophomore guard more often this season. And in Friday night’s exhibition game, Wiggins showcased his expanded skillset. He showed an increased propensity to put the ball on the floor and create — after he was largely a catch-and-shoot perimeter player last season — and finished with nine points.

Freshman class shows its potential and the depth it has added

In the span of just over a minute, forward Makhi Mitchell displayed the impact his size and length can have on the defensive end of the floor.

Fayetteville State guard Jalen Seegars attempted an entry pass to the post, but Mitchell stepped in front to nab the steal. Moments later, Mitchell swatted a shot away. The freshman forward also finished with eight rebounds in 16 minutes of action.

“I thought Makhi was great tonight,” Turgeon said. “Defensively, he gave us a big lift.”

Forward Donta Scott was the most impressive freshman on the offensive end, as he showed the ability to get out in transition and shoot the ball from the perimeter. Scott had two breakaway dunks in transition, and converted 2-of-4 3-pointers to finish with 10 points.

Those two freshmen were among the first players off the bench in the exhibition victory. Turgeon has lauded this team’s depth, even saying this may be the deepest team he’s ever coached. The pair of freshman forwards showed the impact they’re capable of having on both ends of the floor on Friday night.

Free-throw shooting will need to be addressed

Early in the second half, forward Jalen Smith had just missed his fourth free throw of the game. As the shot rimmed out, the sophomore shrugged, perplexed by another missed opportunity from the free-throw line.

The struggles weren’t limited to Smith. Guard Anthony Cowan missed three free throws, and guards Darryl Morsell and Serrel Smith both missed a pair. In all, the Terps finished 16-for-30 from the charity stripe.

For a team with aspirations of a deep run in the NCAA tournament, free-throw shooting will be imperative in tight games.

Turgeon estimated the team has collectively shot around 24,000 free throws since the school year began, and converted 86 percent of those shots. So he was justifiably disappointed with the 53.3 percent clip on Friday night.

The team will look to shore that area up in practice before the regular season officially gets underway on Tuesday night against Holy Cross.

“[Turgeon] said we’re just going to shoot more free throws,” Wiggins said. “Individually, he pushes us, he tells us, we need to get at least 250 free throws [per week] up on our own outside of practice. … Tonight it didn’t seem to show.”