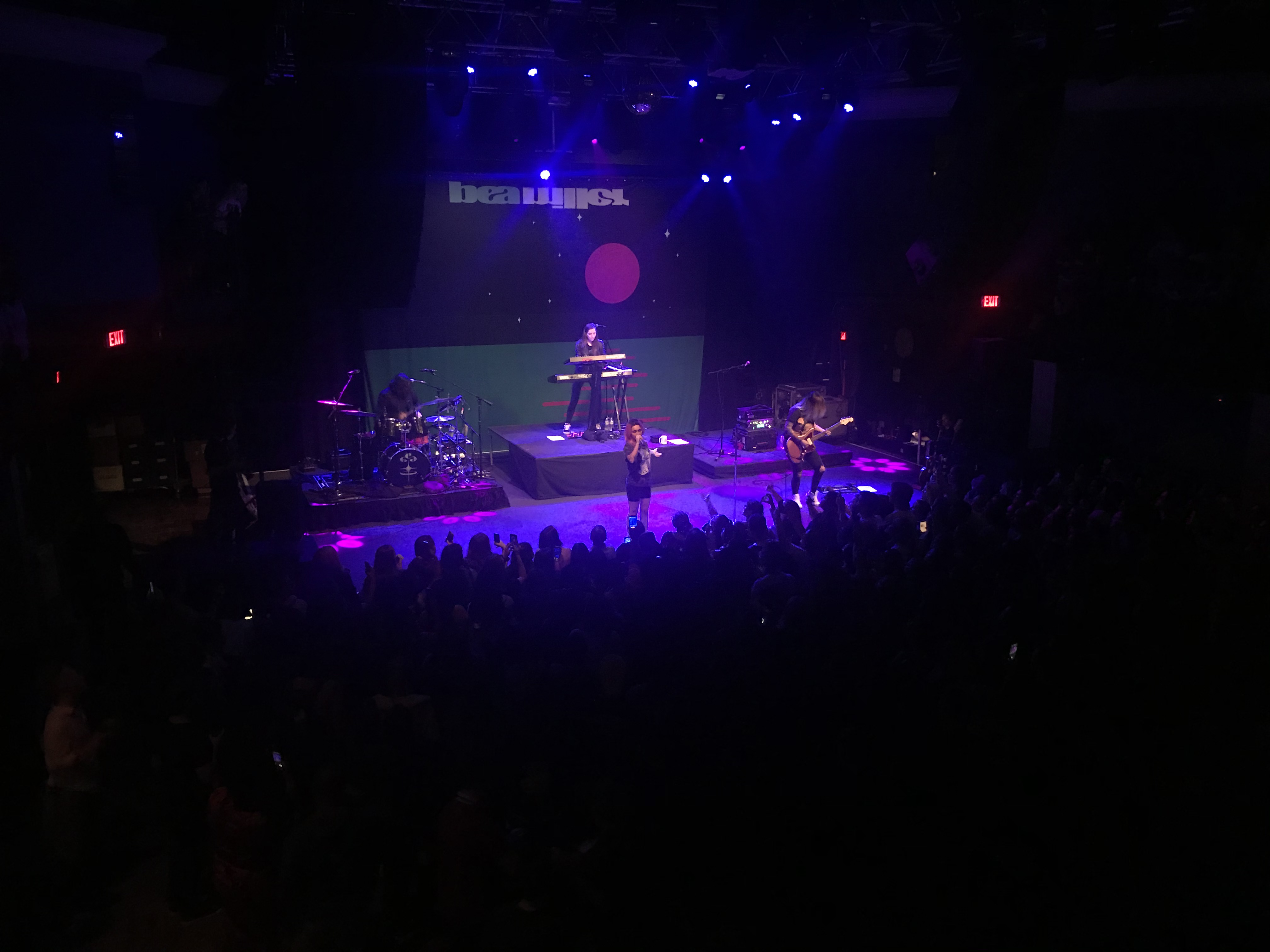 I found myself in a crowd of people Monday night I didn’t previously know existed: Bea Miller stans.

The X Factor alumna played the show as part of her “sunsets in outerspace” tour. Prior to the show, the only song I knew of hers was “Young Blood” from five years ago. So, this was my first big dose of Bea.

Starting off the show was pop singer Kennedi, who played a bevy of songs that sounded like they were straight off of SoundCloud. Her energy was intense at times, as she was eager to interact with the crowd, calling them “cute.”

However, when she sang, it was hard to tell if she was even singing because of how heavily AutoTuned she was, even during an acoustic number. And some of her antics —  such as winking at the young girls in the crowd, or desperately trying not to trip over her own microphone wire while dancing — were just too cringey for me.

Next up on the roster was Nigerian singer Kah-Lo. Dressed in a vibrant green romper to match her wig of the same color, Kah-Lo was a bit stilted when she first hit the stage. But once she found her groove, she amplified the energy of the room. Whether she was dropping it low for “Spice” or voguing to “Bad Boy,” the room was electric with Kah-Lo on stage. She seemed so genuinely excited to close out her set with her new song, a horn-heavy dance track, “Exit Sign.”

Preceded by the chanting of the crowd yelling “Bea, Bea, Bea” over and over — the first time I’d heard such cheering for someone other than Beyonce — Bea took the stage and immediately commanded the room. Breaking out into the thunderous “Song Like You,” the guitar shredding, drum banging and Bea’s strong stage presence made it feel like a rock show for a split second.

What was best about Bea’s performance was how willing she was to chat with the crowd, and not taking herself too seriously. She wasn’t afraid to make fun of the crowd for never cheering as loud the first time as they do the second time when asked by a performer or chuckle at herself after she said the word “conundrum.”

She expressed her disappointment for nearing the end of “spooky season,” but dedicated two songs to October as a result: “to the grave” and “Dracula,” the latter of which went especially hard.

Bea talked about the dilemma of finding herself, discussing how she would say, “here’s my pussy” to guys who don’t pay attention to her. Then she broke into the song “motherlove,” which the crowd chanted back feverishly.

She played an array of her newer songs from “feel something” and “it’s not u it’s me” to “NEVER GONNA LIKE YOU” and “FEELS LIKE HOME.”

Before breaking into “Fire N Gold,” she cracked a joke about how when she’s dead, her gravestone would say this song is the only one of hers that people know. I’m a sucker for dry humor, so I couldn’t help but laugh as the crowd looked mortified.

After two more songs, the show was over, and I was left with two thoughts: First, that Bea was surprisingly entertaining, even just on the mic having a kiki with the crowd. Second, that she had left out the only song of hers, “Young Blood” that I was familiar with off the set. Is that how irrelevant I am now? … Don’t answer that.

Criticism of ‘Drag Race All Stars 6’ cast highlights racism, exclusivity of fan base